For most language learners, the mere mention of "Spanish subjunctive” is enough to instill fear.

It’s something especially troublesome for English speakers, because while we do have a subjunctive in English, it’s nowhere near as frequent or apparently complicated as it is in Spanish.  I bet you didn’t even know we had one!

Well, don’t worry. Hopefully after reading this quick guide to the most hated aspect of Spanish grammar, you’ll feel more confident and ready to make it a part of your regular speech. 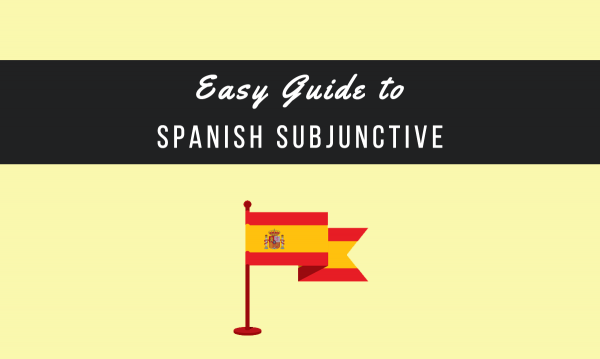 Quick Navigation
First Things First...
A few basic things to remember about the Spanish Subjunctive
So, let’s jump right in and look at the different ways we can use the subjunctive.
W- Wishes
E- Emotions
I- Impersonal Expressions
R- Recommendations
D- Doubts
O- Ojalá
One last thing…
In conclusion...

In order to become more comfortable with the Spanish subjunctive, you have to change your way of thinking about it. It’s not really a tense--it’s a mood.

Tense refers to time (past, present, future); mood refers more to the certainty or uncertainty surrounding the statement being made. The subjunctive is used, more often than not, when you want to add an air of “uncertainty” to what you’re saying.

A few basic things to remember about the Spanish Subjunctive

If you’re using the subjunctive, you’re going to have two subjects! This goes along perfectly with the “uncertainty” element. If I’m talking about myself, I can be pretty sure that I know what I’m saying (I like cheese- plain and simple, no questions asked, no doubt in my mind).

But if I’m talking about what I think other people may be feeling, thinking, or should be doing, I can’t know for sure that what I’m saying is true (I think he likes cheese- maybe he does, maybe he doesn’t, who can say for certain unless you’re ‘him’).

However, if I do know for sure that he likes cheese, I don’t need to add the first subject (me) to my statement. (He likes cheese. So, in short, one subject=I know what I’m talking about.)

And one more rule to remember with the subjunctive-- you will always have two verbs.

The different ways we can use the subjunctive.

The most common uses of the subjunctive can be broken down into a few simple categories. One easy way to remember them is with the acronym WEIRDO. (And hey, the subjunctive is pretty weird, so that shouldn’t be hard to remember!)

This is pretty much what it sounds like. Anything you wish, want, hope for, expect, etc. from someone else, you will use the subjunctive.

(Note the use of two different subjects!! With just one it would be: Espero poder ir a la fiesta- I hope I can go to the party.)

Anytime you want to say you’re happy, sad, angry, etc. with someone/ something else, you’ll use the subjunctive.

For example- It annoys me that he talks a lot- Me molesta que hable mucho.

*Note- these are “verbs like ‘gustar’” meaning- it’s the object of the sentence that’s doing the action. Example- Me gusta que hable despacio-- It is pleasing to me that he speaks slowly.

**Note- these are reflexive verbs meaning- the object and the subject are usually the same. Example: Me alegro de que vayas con nosotros--I am (myself) happy that you are going with us.

If something is subjective- i.e. your opinion- but you want to state it in an impersonal way, you would use one of the following expressions followed by the subjunctive.

Telling someone to do something, whether it’s as a recommendation or a suggestion, you have to use the subjunctive.

If you don’t believe something, or aren’t 100% sure about what you’re saying- you guessed it!- you use the subjunctive.

This is a fun word that has Arabic origins (It’s a way of saying “Oh Allah”). In English we may say something like “God willing…” or “I really hope...” Well, this is sort of a way of saying the same thing.

Example: I hope to God/ really hope I can go to the party- Ojalá pueda ir a la fiesta.

Note: One common mistake that English speakers make with this construction is that they want to add the “que” that is so often used with the subjunctive. Espero que pueda ir. Ojalá pueda ir.

Let’s take a moment and talk briefly about the second requirement mentioned earlier for using the subjunctive--two verbs. This doesn’t mean that you have to have two DIFFERENT verbs. Just that there has to be at least two verbs in the sentence. Let me explain.

You know that famous song “I want you to want me... “? Well, right there, you’re expressing a wish or desire, you have two subjects, and you have two verbs even though they are both “want.” So, the song would go “Quiero que me quieras…” with the second “want” conjugated to the subjunctive.

Adding to our idea of a “mood” of uncertainty, there’s one other common use of the subjunctive that you should be aware of. It’s when talking about something that will happen in the future, and includes the phrase “when…” (“cuando…” or “en cuanto…”)

For example: When I know, I will tell you- Cuando/ En cuanto sepa, te lo diré.

But, what’s the difference between the two sentences below:

Cuando llego a casa, como la merienda. (When I get home, I eat a snack.)

Cuando llegue a casa, voy a comer la merienda. (When I get home, I am going to eat a snack.)

Simple. The first sentence is talking about something that’s a routine--it’s something you do regularly, so you know you’ll continue to do it (When I get home -everyday- I eat a snack).

The second is something that’s out of the ordinary, a plan you’ve made, but you can’t be certain that it will play out the way you intend (When I get home -today- I will eat a snack). It’s talking about a specific moment in the future that hasn’t happened yet, so you can’t be 100% sure that it will.

Learning the subjunctive can be very frustrating at times. But, if you change your way of thinking about it, you may find that it’s not all that bad! Remember, it’s just a way of adding a different “feeling” to what you’re saying.

So, next time you find yourself getting flustered when trying to use this most hated part of Spanish grammar, just remember--the subjunctive is WEIRD(O)!

The Imperative Voice in Spanish

Want more cool tips about the Spanish language? Subscribe to the weekly newsletter and get an awesome FREE gift.