The Imperative Voice in Spanish 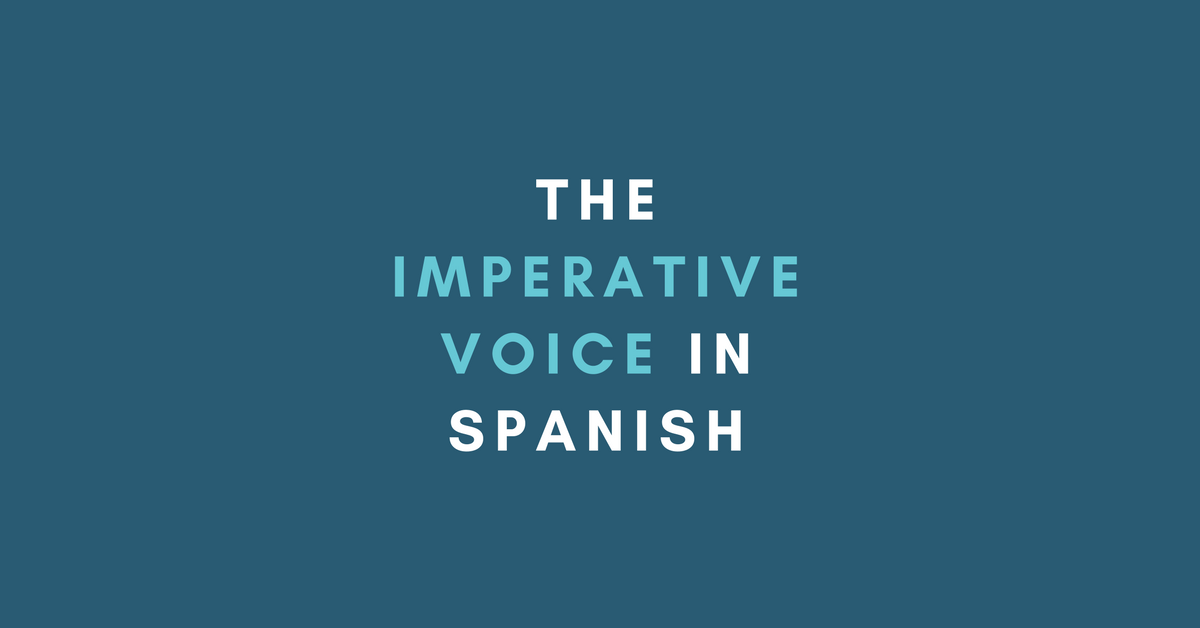 Giving commands is an important part of speaking a language. In Spanish, commands are very important and frequently used in daily speech.
Read on for a quick introduction to this very useful element of the language!

Before We Dive in Too Deep…

Obviously everyone knows what a command is. In English, forming the commands is pretty straightforward and relies more on your intonation than anything. When we heard the term “command” we usually think about a harsh, scolding tone or being told to do something by an authority figure. “Clean your room!” “Turn in that report!” “Don’t be late!”

In Spanish, however, this isn’t always the case. There are a few different ways to give “commands” and some of them would even be considered polite.

Depending on where in the Spanish speaking world you are, you will find that the use of commands may differ. In Spain, for example, the informal command form is used all the time and there is nothing strange about someone you don’t know speaking to you in the “tú” command form. In some Latin American countries, however, this would be extremely rude and the formal command form would be used.
Either way, the use of commands in Spanish is much more common and not quite as harsh as we as English speakers may be used to.

Usted/ Ustedes Commands (The Formal “You”)

The “usted” conjugation is the formal, respectful “you.” So, this first way of forming the command will be used in any situation you may feel you aren’t comfortable with the person you’re speaking to.

Similarly, the “ustedes” is the plural form of the formal “you.” This is when you’re speaking to a group of people you would want to show respect to.
For example, you may use this with your parents, elderly people, or someone you don’t.

To form the “affirmative” usted command, you’ll need to go through a few different steps. These will be the same as forming the present subjunctive conjugation of the “usted” and “ustedes” forms.

Here are some examples:

*Here, conjugating to the “yo” form may not seem completely necessary, since there is no spelling/ pronunciation change.

**Here, however, we see the importance of going to the “yo” form. If not, the spelling/ pronunciation change will not carry over, and the command would be formed incorrectly.

There aren’t many irregular “usted/ ustedes” commands. They are the following:

Unlike the informal commands which we will see in a moment, there is no change in conjugation when forming the negative formal commands. Simply add a “no” and there you have it!

Tú/ Vosotros Commands (The Informal “You”)

The “tú” form of conjugating verbs is the informal, familiar “you.” This is used with people you are comfortable with.

In Spain, this form will be used very frequently, as mentioned above. In other parts of the Spanish-speaking world it will only be used with friends or close family members.

The “vosotros” conjugation is used in Spain as the informal, plural “you”. In Latin America, this conjugation will not be used, and the “ustedes” will be used in both formal and informal situations.

To form the affirmative “tú” command, you will simply conjugate the verb to the 3rd person present conjugation (i.e. the “usted, él, ella”) form.

There are 8 irregular “tú" commands. They are the following:

To form the negative “tú” command, you will need to follow just a few simple steps.

These steps will be the same as forming the present subjunctive in the “tú” form.

To form the negative form of the irregular “tú” commands, you will follow the same pattern as the present subjunctive “tú” conjugations.

*For this verb, the -oy gets dropped, not just the -o. The same would happen with the verb “estar” (Estoy- Estés)

** This verb is still somewhat irregular in the negative command form, as simply dropping the -oy and adding the “as” ending would result in the 3rd person singular present conjugation (“vas”).

As mentioned before, this will be used primarily in Spain.

*Notice how even verbs which are almost always irregular in their conjugations follow the same rules as the others when forming the affirmative “vosotros” command.

Like with the negative “tú” commands, these are formed the same as their present subjunctive counterparts.

At first glance, the imperative form in Spanish can seem a little overwhelming. The best way to get familiar with them is simply with practice!

Do you have any short-cuts or methods you use to make this somewhat intimidating part of speech a little more accessible? Share in the comments.

Learn Spanish step-by-step with this complete method with audio!