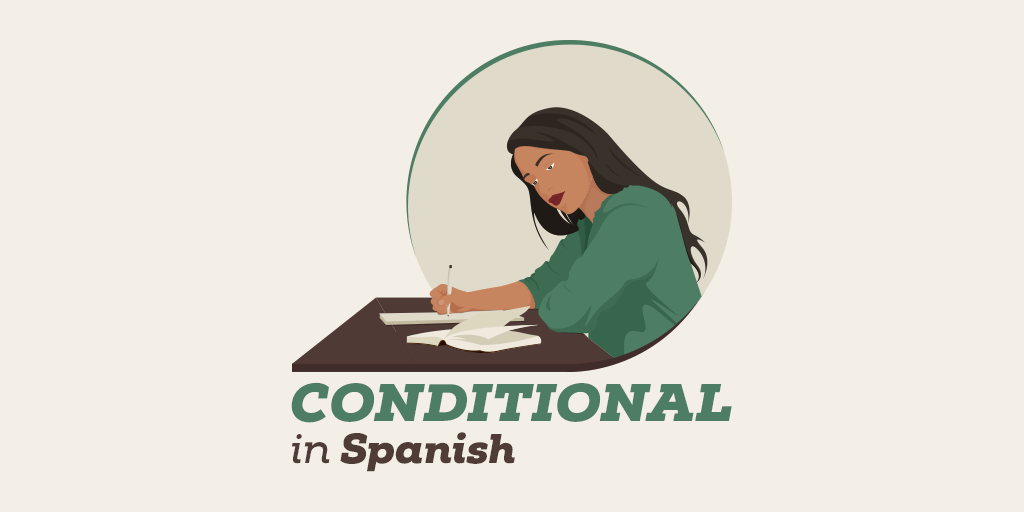 If we wrote an article on the Spanish conditional tense, would you read it?

Okay, so the sentence you just read used the conditional. The conditional tense is used to describe what would happen. You can use it when talking about hypothetical situations, e.g. ‘I would buy the dress.’

Quick Navigation
How to form the Spanish Conditional Tense
Irregular stems
When to use the conditional tense in Spanish
If I were you...
Quiz
¡Muy bien!

How to form the Spanish Conditional Tense

If you know the rules for the Spanish future tense and the Spanish imperfect tense, then forming the conditional is really simple! Don’t worry if you don’t know them; we’ll break it down.

The conditional tense is formed by joining the future tense stem with the imperfect endings of -er and -ir verbs.

For regular verbs, the stem will simply be the infinitive.

The imperfect endings we need to stick onto the stems are:

Let’s look at some examples to make things clearer:

So usually, you just take the infinitive, and add one of the endings given above. Read through these example sentences and you’ll see that it works the same for -ar, -er, and -ir verbs!

If you’ve looked at the future tense, you’ll know that some verbs have irregular stems. They need to be learnt, but luckily there aren’t too many. Here are the most common ones:

*Haber is most commonly used in one of two ways. The first is ‘there is’/’there are.’ For example:

Hay un coche allí. (There is a car there.)

Habría un coche allí. (There would be a car there.)

The second is ‘to have’ in compound tenses.

He comido. (I have had dinner.)

Habría comido. (I would have had dinner.)

Another irregularity to remember with stems is that if a stem has an accent, the accent moves to the ending, e.g.

When to use the conditional tense in Spanish

Often, the conditional tense is used with a condition, i.e. I would do something if certain conditions were met.

In each case, you take off the infinitive ending, and add the new endings onto the stem. There are exceptions (this is Spanish, after all!) but let’s not go into those right now!

So, one way we can use the conditional is using the word si (‘if’) in one of these formulae:

Here are some more example sentences. Try to identify the conditional and the imperfect subjunctive in each case.

Another cool way of using the conditional is in the phrase ‘if I were you.’ There are a couple of ways to say this in Spanish:

Answering a few questions will help you figure out how well you know this tense! For each phrase, try and choose the correct answer.

3.  Juan ___ con cinco mujeres a la vez si pudiera. (Juan would date five women at once if he could.)

5. Vosotros ___ muy buenos abogados. (You guys would be great lawyers.)

6. Beatriz y Laura ___ a Alemania si los vuelos costaran menos. (Beatriz and Laura would go to Germany if flights didn’t cost as much.)

Hopefully now you have a solid idea of how to say what would happen (if some condition were met).

Using what you learned in this lesson on Spanish conditionals, try and write your own conditional sentences in the comment section!