A Quick Shortcut to Spanish Tenses 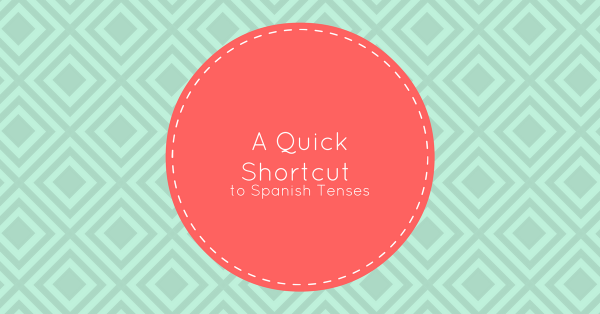 Spanish tenses can be complicated and cause countless headaches to any learner. While learning the complicated ins and outs of each of the different tenses is necessary to really take your Spanish to a more fluent level, there are a few shortcuts you can use to help you get there!

It is possible to use just three different verbs to express the recent past, the ongoing present, and the near future. If you are able to express these three things, you’ll be able to get the conversational ball rolling easier and gain the confidence you need to dive deeper into the dreaded world of Spanish tenses!

The past in Spanish is one of the most complicated things for English speakers. Since Spanish has---not one, not two---but actually three ways to refer to things that took place in the past, knowing when to use which one can be very difficult.

While the three tenses mentioned above seem relatively cut and dried on the surface, they regularly trip up the non-native Spanish speaker. With practice, though, you’ll find yourself becoming more familiar with them.
There is, however, one little shortcut you can use to refer to something that happened in the near past. This is using the verb acabar. It’s like the English equivalent of saying “just”.

Using acabar to talk about the near past

This is referring to something that you “just” did, or that was “just” done by someone else. Acabar is an -ar verb conjugated regularly.

Some examples of this verb used as the near past are the following:

Learning to talk about the future in Spanish is pretty easy for the native English speaker. This is simply because, generally speaking, the different options available are similar to their English equivalents.

The last way that you can use to speak about the future in Spanish is probably the most common, and, conveniently enough, the easiest to learn! This is with the verb ir.

Ir a to talk about the future

Using the verb ir, meaning to go, to talk about the future is extremely common, especially in everyday, colloquial speech. It’s like the English “going to…”

To use this verb, you will use the following pattern:

Ir is irregularly conjugated. The conjugations are the following:

Some examples of using this constructions are:

Third person plural: Van a sacar el perro. (They are going to walk the dog.)

Talking about the present in Spanish is pretty easy. The hardest part is simply familiarizing yourself with the conjugations themselves.

The present tense in Spanish is very versatile. It can be used to talk about the simple present, a continuous action taking place in the present, and the future.

There is, however, a Spanish equivalent to the English present progressive that can be used to talk about something going on at the current moment. It is very useful to be familiar with it, and will help you a lot when speaking to a native Spanish speaker!

The Present Progressive in Spanish

The present progressive is, like in English, saying “to be doing X”.

It is formed using the verb estar and has the following construction:

The conjugation of the verb estar is:

If you have a stem-changing verb, you will change the appropriate vowel, and add the ending.

And, there are some instances when the spelling needs to change so as not to change the pronunciation:

Some examples of using this construction to talk about events taking place in the present are:

The constructions mentioned above are all commonly used in everyday speech, and are simple, easy-to-remember ways of talking about the (near) past, the future, and the present progressive.

While it is important to learn the different tenses in Spanish in order to take your language to the next level, using the shortcuts taught to you in this lesson will help give you the level of confidence you need to engage in a large variety of conversations.