An Introduction to Spanish Prepositions 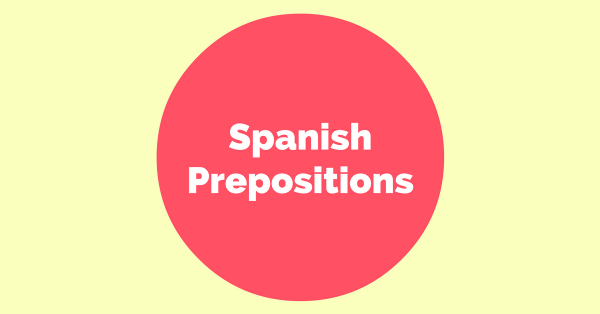 Prepositions are small words that pack a big punch. They define, identify, and explain, and are an essential part of everyday speech.

They help you identify the girl with the long hair, and you need them to explain that dinner is on the table. It’s almost impossible to say a single sentence without (see what I mean?) one of these useful little words!

Learning to use prepositions in Spanish isn’t overly difficult but does take some practice. Read on for a quick introduction to these very useful little words.

Let’s start at the beginning…

What are prepositions and why are they so important?

A preposition is a (usually) little word that can have a big impact on what you’re saying. It is what forms the connections and relations between different elements in a sentence.

For example (prepositions in bold):

A preposition is always followed by an object (a noun or pronoun). In the examples given previously, the prepositional phrases would be:

These phrases function as either adjectives or adverbs. In the examples above, the prepositional phrases are all functioning as adjectives, describing the nouns (girl, boy, store) answering the question “Which (girl,boy,store)?”

An example of a prepositional phrase functioning as an adverb would be the set of examples relating to the dog.

Here, the prepositional phrase answers the question “Where (is the dog)?”

Prepositions in Spanish function much the same as they do in English. They always take an object, and they will serve as either an adverb or adjective.

While on the surface they appear pretty easy (since they’re like English and all) sometimes they can cause a few problems. Mainly, this comes when deciding which preposition to use when.

For example, one of the prepositions that gets misused frequently in Spanish by English speakers is en.

Two of its uses are pretty easy (in, on) since it sounds like its English equivalents.

This little word causes problems, however, with its third meaning “at”. Often times, as English speakers, we want to use the Spanish preposition a in place of en because we associate the a with our own “at”. This is wrong, though. For example:

Let’s look at some of the most common prepositions in Spanish and their different meanings and uses.

Most Common Prepositions in Spanish

In addition to en which we’ve already seen, you will also commonly hear/see the following prepositions in Spanish:

So, now that we have a working list of the most common prepositions in Spanish, let’s look at some of the verb/ preposition combinations that tend to be more difficult for English speakers.

A lot of verbs in Spanish take a specific preposition. For example:

The best way to learn these is by simply familiarizing yourself with them as you come across them. Below, however, I want to list the ones that seem to be common pitfalls for English speakers because we would also use a preposition with the verb. However, the preposition we use, and the one used in Spanish are different (i.e. they don’t translate exactly).

The dreaded “por” and “para”

These two little words can easily insight a sense of fear in English speaking Spanish students everywhere. Being that, more often than not, we translate both of them to our preposition “for” knowing when to use each one can be a little confusing.

While giving an in depth explanation of when to use each one may be a little too much for this specific article, let’s just look at a quick chart that might help to clear up a few things.

There are only 2 contractions in Spanish, and they both happen to relate to prepositions. So, let’s just go ahead and take a quick look at those, shall we?

On the surface, Spanish prepositions appear to be just like the ones in English. However, there are a few little nuances that every English-speaking Spanish student should be familiar with. These little, but extremely useful, words can be confusing sometimes. But, don’t worry! The more you practice them, the easier they become.

Learn Spanish with this step-by-step method with audio!