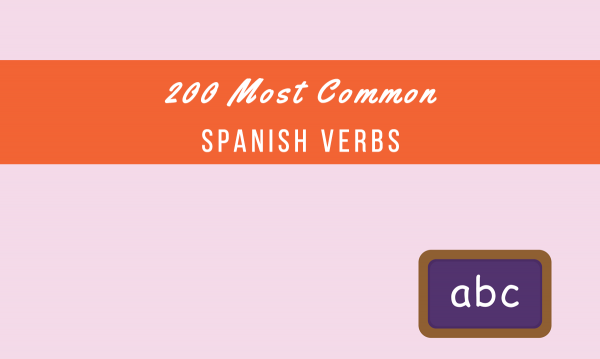 Are you ready to give your Spanish vocabulary a major boost? You better be because today, we’ll be going through 200 of the most common Spanish verbs.

These are some very useful verbs that you’ll encounter a lot in everyday Spanish conversations. We'll start with a list of ten common Spanish verbs together with its present tense conjugation, then proceed to the list of 200 verbs.  So, without much ado, let’s check them out, shall we?

Get your free PDF and MP3

Don't have time to read this now? Then click on the button below to download the Spanish Learning Package.  You’ll find inside the pronunciation guide in PDF format (and you get the MP3 too!)

Already subscribed to My Daily Spanish? Go back to the email you received previously and see the link to the Spanish Learning Package. The files are already there!

One of the most useful Spanish verbs you could tackle first is “ser”. This irregular verb is almost always present in everyday conjugations, same as its twin verb estar.

Here’s the conjugation of ser in the present tense:

Estar is another highly useful Spanish verb which also means to be. The trouble starts in trying to discover the nuances between the two, “to be” verbs in Spanish. Don’t worry, we got you covered. You can check out the differences in this article: Ser vs. Estar.

Temer, a Spanish verb which means “to fear”, is a regular -er verb. Check out its present tense conjugation below.

Another common Spanish verb, partir, is a regular verb. This means when you memorize its conjugation, you can use it as a model for other Spanish verbs with -ir endings!

Here it is conjugated in the present tense.

Pedir in Spanish means to ask. Here is the present tense conjugation of this verb.

When you want to say someone is able to or someone can, you use the verb poder. Here is the present tense conjugation of this verb.

Haber is a verb you’d be using a lot in Spanish and it means “to have” but this one is mostly used as an auxiliary verb or helping verb in compound tenses. Check out its present tense conjugation below.

Another Spanish verb that means “to have”, tener is an irregular verb. It is used in about the same way as you would use “to have” in English.

See the present tense conjugation below.

Going somewhere? When you have “to go”, use the Spanish verb ir. This is frequently used in Spanish conversations, but watch out, it is highly irregular!

Here’s a sample of how it is conjugated. See the Spanish verb ir in the present tense below.

Jugar is a stem-changing verb in the sense that it changes from u to ue. But there’s no change in the nosotros and vosotros forms in the present tense. See the present tense conjugation below.

There you go with 10 commonly used Spanish verbs. These 10 verbs are included in the Spanish Verb Drills Mega Bundle. It's a unique and innovative learning material to help you master Spanish verbs without any memorization. Learn all about it below.

But wait--that’s not all there is to this list. We have promised 200 Spanish verbs, and that’s what you’ll get below!

And there you go. That's 200 of the most common Spanish verbs you'll encounter in Spanish language.

For more related articles, check out the following:

What else do you want to see featured here in this website? Leave a comment and we’ll be happy to oblige!