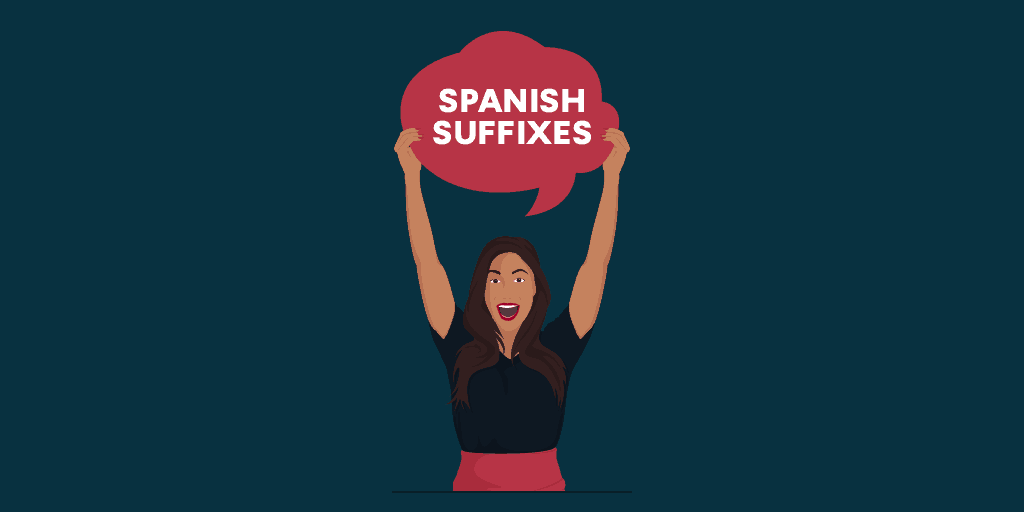 In this article, we’ll be looking at different kinds of suffixes in Spanish. First we’ll talk about what they are, then we’ll look at the different types!

What are Spanish suffixes?

In this article, we're going to look at the type of suffix that changes the shade of meaning: diminutive, augmentative, and pejorative. Then we’re going to list a load of suffixes that group together certain types of words. Ready? Let's go!

How to form the Spanish suffixes

There are loads of rules relating to this. Instead of trying to learn them all at once, try first to recognise the patterns you see as you go along.

This suffix can be used to add a warm tone to a noun. It makes everything a little less harsh.

It can denote affection.

A cool way to use this suffix is when you’re not really saying anything about the noun at all! You’re actually just using the cutesy language to convey a warm, friendly attitude to whoever you’re speaking to.

Colloquially, it can be used to add specificity to an adverb. This would sound odd to a Spaniard, and is much more common in Latin America.

This is a versión of -ito that’s used in some Latin American countries, such as Colombia and Venezuela, as well as some parts of northern Spain.

You’ll hear this one a lot in Southern Spain. The most obvious use is to refer to something smaller.

It can be used to decrease the importance of something.

Sometimes we want to say something but we’re worried it might come across rude, so we use -illo.

Some nouns have -illo/-illa on the end to refer to a specific sub-type of that noun.

This suffix is used to create a word for a smaller version of something.

When you end a noun with this suffix, you can be referring to a specialized version of it.

This one can be used in the same way as -eto.

Alternatively, it can add a bit of humor to what you’re saying.

This is used most in Asturias, Spain usually as an expression of affection.

There aren’t that many augmentative suffixes in Spanish, and they all do pretty much the same thing, which is to show intensity or largeness. Quite often, there’s also a pejorative (insulting) undertone implying awkwardness, unpleasantness, or the idea of ~too much~.

*N.B. it becomes masculine rather than being ‘fortunona.’

As we mentioned, some augmentatives can have insulting undertones.

Confusingly, it can actually be used to show admiration.

Sometimes you can add –azo to an object to denote a physical clash with that object.

When we say that something is pejorative, we mean that it’s insulting or derogatory. It’s certainly not nice!

Remember that diminutives and augmentatives can also be used in a nasty way. Use your common sense and you’ll be on the right track!

For example, if someone is referred to as una mujercilla rather than una mujer, it’s usually being used in a patronizing way. She’s not being called small, she’s being called unimportant.

Suffixes that show us the category of word

Apart from diminutive, augmentative and pejorative suffixes, there are loads more that group together certain categories of word, which helps a lot when you’re trying to understand unfamiliar vocab in your reading! Sometimes adding them changes one part of speech to another.

This one turns a verb into a noun.

We can add -mente to an adjective to form an adverb.

These usually give us adjectives from nouns.

This suffix gives us a noun or adjective from a verb.

This suffix can be used to show the place where something is kept.

It’s also often used to refer to professions. There are several others that do the same thing: -dor(a)/-ista/-ario/a. Let’s look at some examples.

*Job titles with -ista are interesting because they always end in a! It would be incorrect to call it a dentisto or a pianisto, even if it’s a man. Stick to dentista and pianista.

Many of the words ending in -ería are names of types of shop/service. They can usually be traced back quite easily to a verb or noun.

A lot of Spanish suffixes are cognates, meaning that the Spanish and English look very similar, which will help you recognize them! Check out the similarities in some of these:

There are so many suffixes (more than we’ve been able to mention here), that it’d be foolish to try and learn them all at once. Why not try reading a paragraph from an article in a Spanish-language newspaper or novel, and circling all the suffixes you recognize? Happy reading!