Here is an article about Spanish subject pronouns. We’ll start by looking at what they are, and then go through each (don’t worry, there aren’t too many), and look at how to use them! 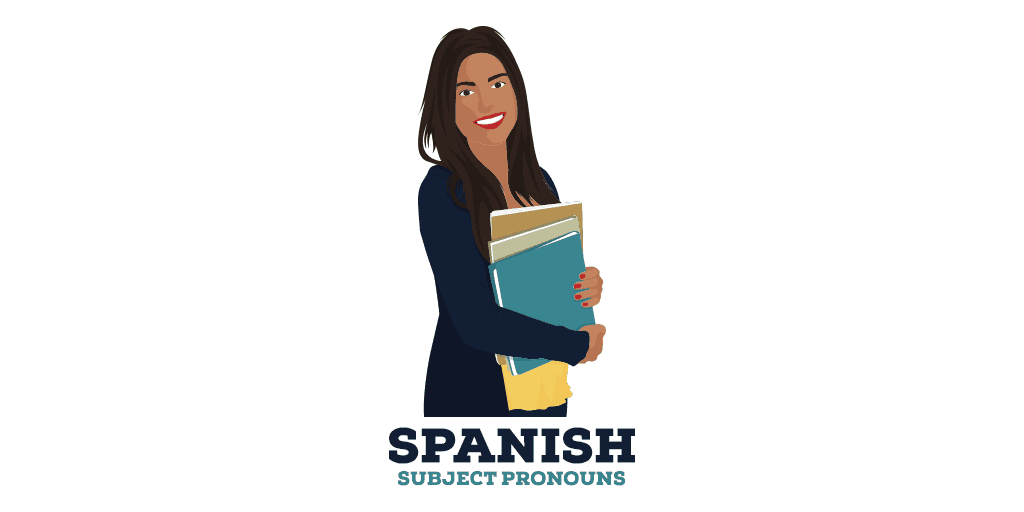 What are pronouns? Let's review

Jim went to his wardrobe and pulled out his best suit jacket, which his mother had given to him. He had to get it dry-cleaned before he could wear it to visit her.

Are pronouns that important? Well, let’s look at Jim’s story again, but this time without pronouns:

So, you tell me. Are pronouns important?

So, what are Spanish subject pronouns?

There are different types of pronouns. One group is personal pronouns, and within this group, we find our topic for today: subject pronouns.

The subject of a phrase is the person or thing that’s “doing” the action. For example, the subject in ‘John loves Mary’ is John. He’s doing the lovin’.

And here they are in Spanish:

In English, we use the word ‘you’ in a lot of different ways without even thinking about it! We use it for the:

In Spanish, on the other hand, each of these situations has a different word for ‘you.’

Knowing which one to use is not an exact science. It will depend on where you are, who you’re talking to, how old they are, what your perceived relationship is, and whether one of you has invited the other to tutear them (yes, Spanish has a verb specifically meaning to invite someone to address you with tú!).

Yo means ‘I.’ We all know how to use ‘I’ in a sentence, so let’s make sure it makes sense in Spanish, too!

Pretty simple? Let’s look at the next one.

Tú means ‘you.’ Now, this is where things get interesting. In most parts of Latin America, they use tú a lot less than in Spain. Latin American Spanish favors the politer usted.

In Spain, you could use tú with:

In Latin America, you should be more economical with it, and use it for:

In some parts of the world, such as Argentina, Uruguay, and Paraguay, tú is hardly used. They use the word vos instead. Same meaning, just a different word!

Él means ‘he’ (or ‘it’). Ella means ‘she’ (or ‘it’). These pronouns are an ideal way to avoid repeating someone’s name over and over.

This is the more formal version of the second person singular. It’s conjugated exactly the same as él and ella (due to how it developed historically*).

Usted is used a lot more in Latin America than it is in Spain. It’s used all over the Spanish-speaking world to show respect to:

Sometimes in Spain, you can gamble with tú, but in Latin America (and even if you’re in Spain and in doubt), stick with usted for:

The word usted comes from the shortening of an archaic phrase, vuestra merced, a way of addressing your superiors with respect and courtesy. This is why you see usted sometimes abbreviated to Ud. and sometimes to Vd.!

Vosotros/vosotras is the plural version of informal ‘you.’

In Spain, the use of vosotros corresponds to the use of tú. For example, if you were talking to one friend your age, you’d use tú, so when you talk to a whole group of them, opt for vosotros.

In the vast majority of Latin America, vosotros basically doesn’t exist. There’s no point even considering using it—they always use ustedes for plural ‘you.’

Ustedes, sometimes shortened to Uds. or Vds., is the plural form of usted. It refers to the second person plural—formal version!

So, it’s used in Spain as the plural form of usted (as discussed above).

However, in Latin America, ustedes is used in all second person plural situations, no matter what level of formality or respect! They literally only use ustedes, never vosotros, when talking about ‘you’ (plural). You could be talking to a group of kids and still would use ustedes.

When do we use Spanish subject pronouns?

An important thing to know about Spanish is that it’s what we call a ‘null-subject language,’ which means that we don’t always need pronouns to understand what’s being said.

When we conjugate verbs, the endings tell us everything we need to know about the person and number of the subject. For example, ‘bailas’ means ‘you dance.’ We know that from the -as ending of the verb, which is why we didn’t have to include the subject pronoun ‘tú.’

In fact, most of the time, you don’t need to use the subject pronoun, but there are times when they’re helpful and necessary ...

We can add a subject pronoun to put emphasis on the subject rather than the action.

Sometimes we want to clarify that we’re talking about one person as opposed to someone else. Including these pronouns is the Spanish equivalent of English-speakers putting emphasis in our voices.

Including the subject pronoun clears up any ambiguity caused by these similarities.

When it’s clear from context that we’re using the polite forms usted and ustedes, we might repeat the pronoun anyway just to reinforce that formality!

Subject pronouns can identify someone. For example, when you announce yourself at someone’s front door or on the phone, you can use a subject pronoun rather than your name. Use the verb ser.

Sometimes in Spanish we use the subject pronoun where in English we’d use an object pronoun or prepositional pronoun. All this means is that we use the Spanish for ‘I’ instead of ‘me.’

A Spanish subject pronoun combined with the correct form of mismo means ‘oneself.’

Great job—now you know how to use Spanish subject pronouns! The trick is to only use them where necessary. Have fun practicing!