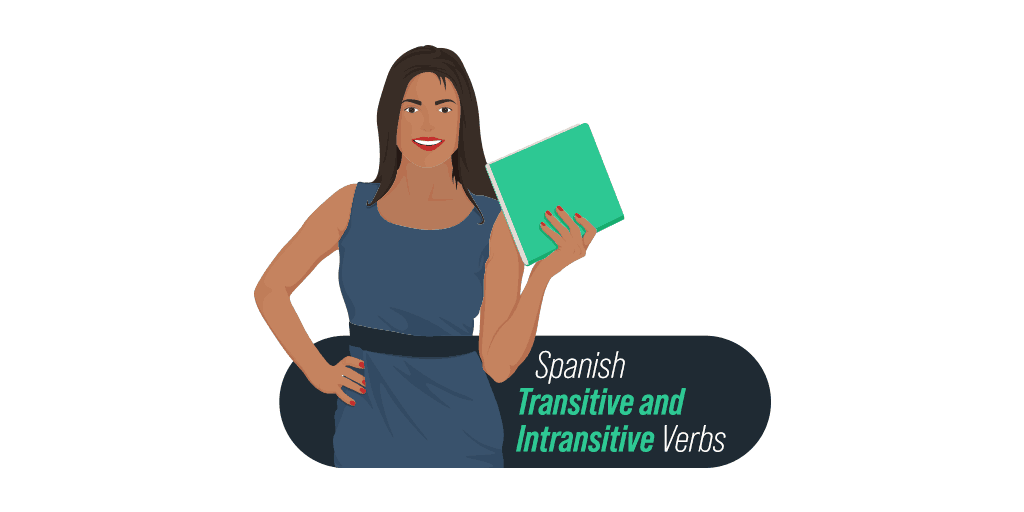 There are several verb types in Spanish, and in this article, we’re looking at Spanish transitive and intransitive verbs!

Most native English speakers don’t have much trouble with them, because the transitivity is very similar in Spanish and English, even if you don’t realize it! Read on to find out what this actually means…

What is a Spanish transitive verb?

A transitive verb is a verb that needs a direct object to complete it. For example, ‘to have’ is a transitive verb. You’d be confused if someone approached you in the street and said, “Excuse me, I have.”

In dictionaries, transitive verbs are often identified by abbreviations such as ‘VT’ and ‘vtr’ written next to them.

A neat test for identifying transitive verbs is to ask “what?” or “who?” If the verb doesn’t make sense without answering one of these questions, then it’s probably transitive!

For example, in the first example below, imagine your friend has some news for you:

“I’ve found.”/“I’ve met.” (Your friend has just used a transitive verb without a direct object.)

“WHAT have you found?!” “WHO have you met?!” (We can’t really understand and respond until we have that vital piece of info.)

“I’ve found A GIRLFRIEND!”/“I’ve met A GREAT GIRL!” (The direct object is the girlfriend/great girl.)

“Wow, where did you guys meet? Tell me all about her!” (Now we can respond appropriately!)

Here’s the girlfriend example, along with lots of other Spanish transitive verbs. The bits in bold are the direct objects. Try saying the sentences without them, and they won’t make much sense!

What is an intransitive verb in Spanish?

As you can probably guess, an intransitive verb is the opposite of a transitive one, i.e. it doesn’t need (and can’t take) a direct object. In fact, intransitive verbs can even stand alone as one-word sentences, without the need to ask “who?” or “what?”

In fact, intransitive verbs can even stand alone as one-word sentences, without the need to ask “who?” or “what?”

Have a look at these examples, and notice that they make sense with no need for direct objects.

Lots of Spanish verbs can be either transitive or intransitive depending on the context!

Some verbs can actually be used as both transitive and intransitive verbs depending on their context. You may occasionally see this in dictionaries marked as ‘vti.’

Seeing them side by side can really help illustrate how this whole transitivity thing works! We’ve underlined the verbs and put the direct objects in bold.

Some verbs are neither!

Some verb types don’t come under this transitive/intransitive categorization, for example:

Having said that, though, the pronominal forms of verbs often act as intransitive ones. For example:

For each of the following sentences, pick whether the verb in bold is a transitive one or an intransitive one (or, if it could be both, which one it is in the given context).

2. Quiero que vengas a mi fiesta. — I want you to come to my party.

The great thing about this lesson is that there isn’t a massive list of rules to remember. Understanding the differences between transitive and intransitive verbs isn’t vital to actually producing good quality Spanish, but it is good to know, as it provides you with a deeper understanding  of the way Spanish grammar works, meaning stronger support for your daily study!