20 Spanish Dishes for All Seasons 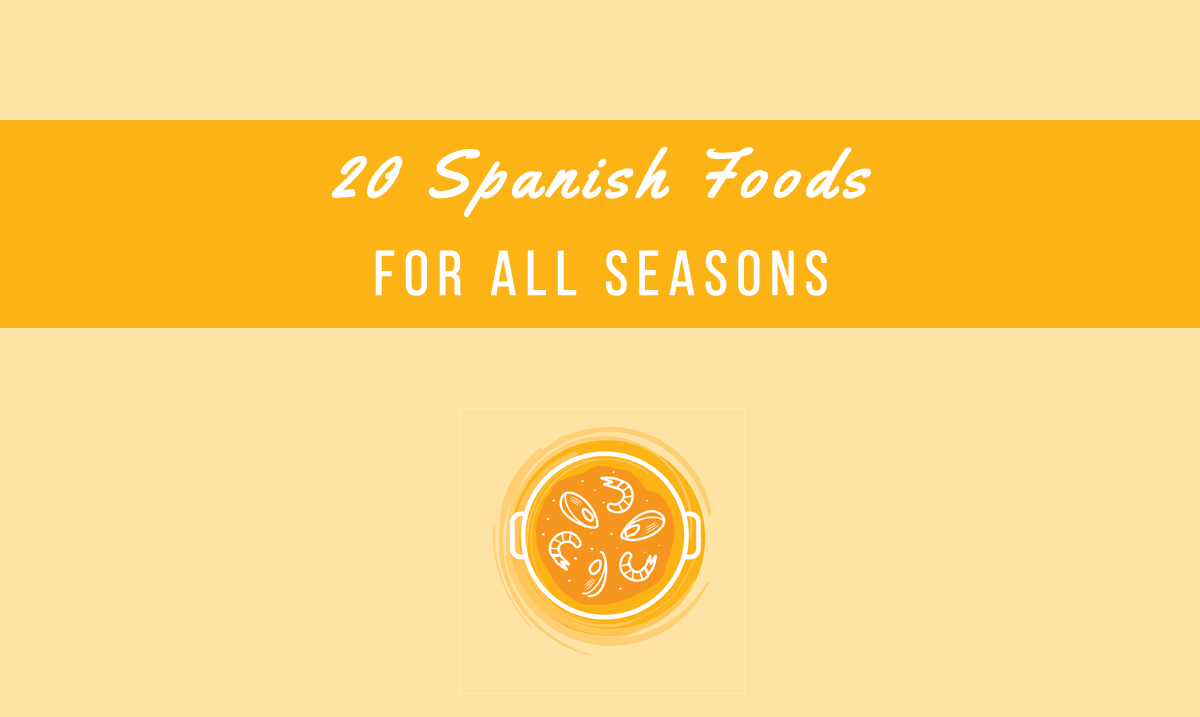 Spain is so full of amazing food that it was hard to narrow this list down to only 20 dishes. It took many late night dinners and taste tests, but we have compiled our favourite 20 dishes that are classics in Spain. 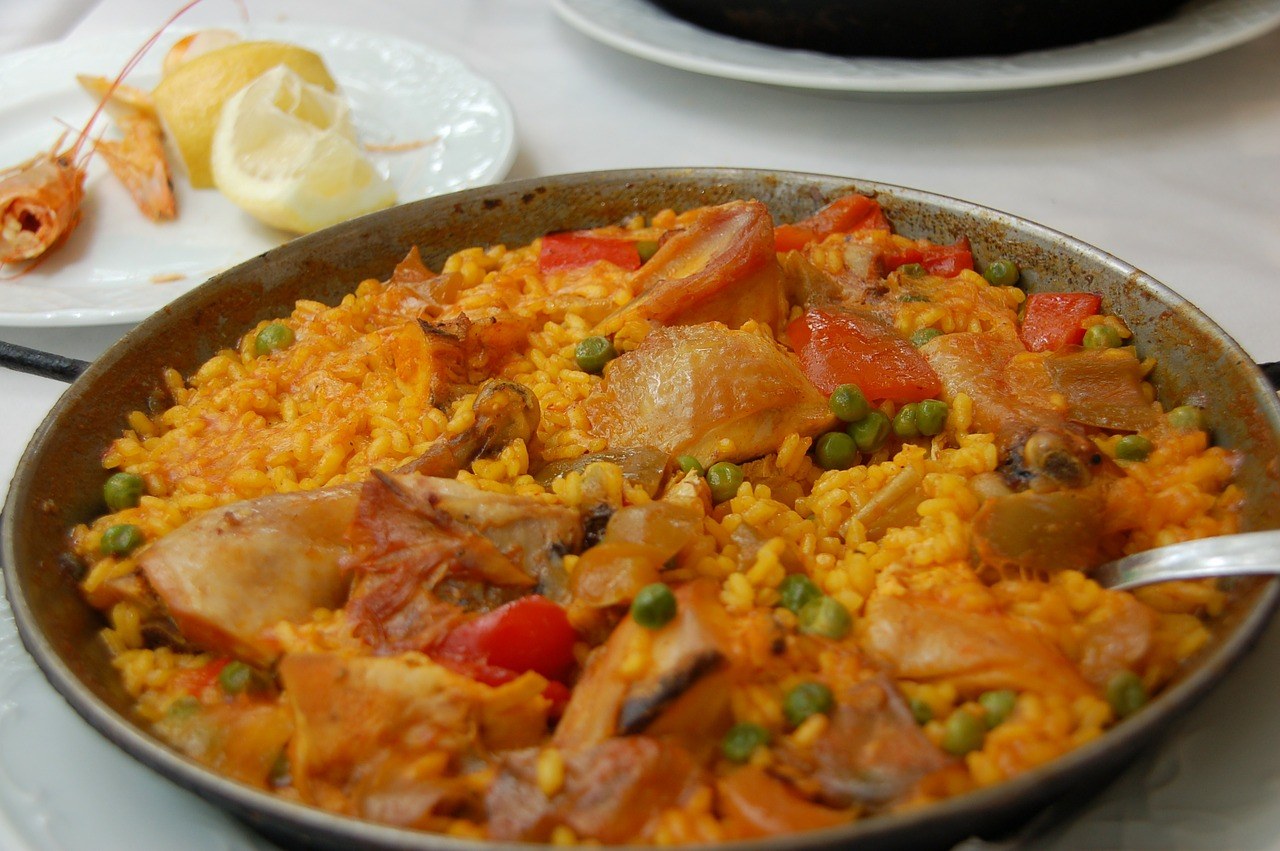 Paella is native to Valencia and is something that everyone who is interested in Spanish cuisine needs to try. Paella is a rice dish which is classically made with rabbit, chicken, green beans, saffron, and white beans that are only found in the Valencian community.

Paella from a Spanish restaurant is amazing, but if you can somehow score paella made by a Spanish “abuela” (grandmother), you’ve hit the jackpot.

These deep fried squids are bite-sized and so so good. 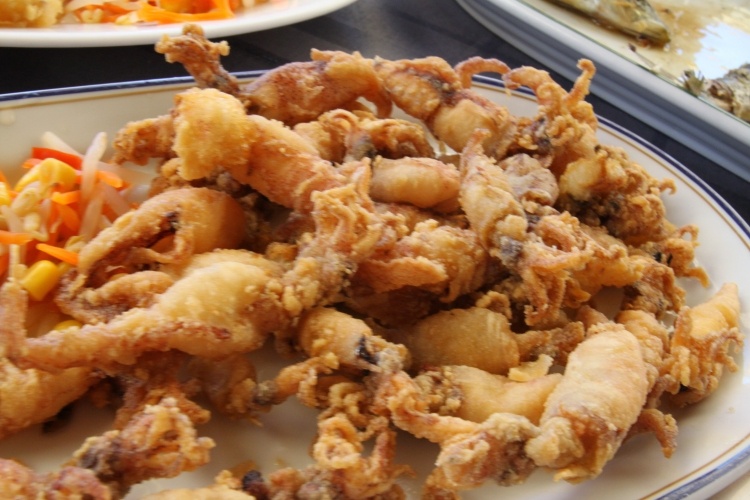 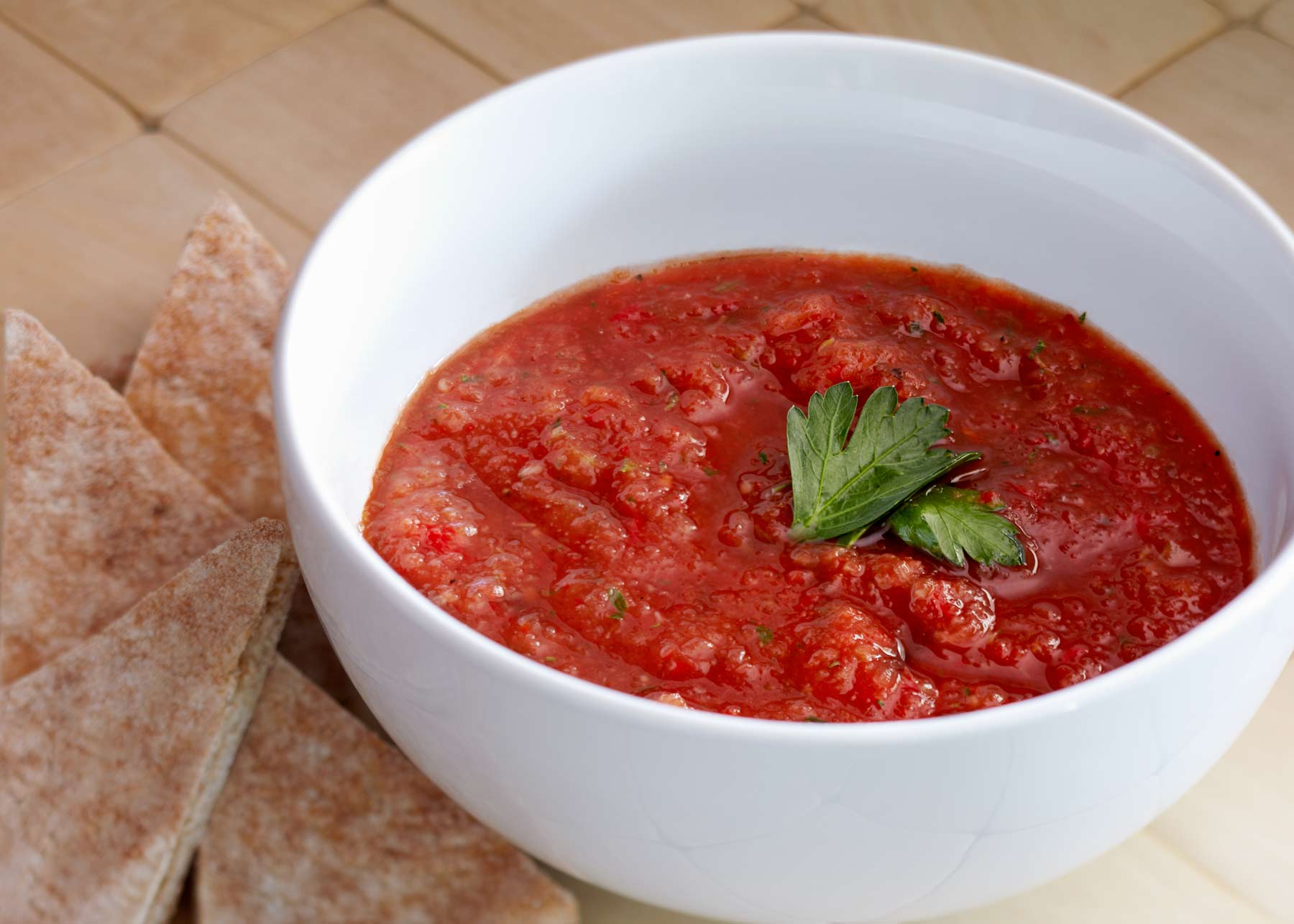 With all of the heat in Spain, you’ve gotta have something cool and refreshing to eat. Gazpacho is a cold soup that is basically just blended tomato, bell pepper, onion, garlic, cucumber, olive oil, and vinegar.  It’s super healthy and perfect for vegans and people with special diets, too! 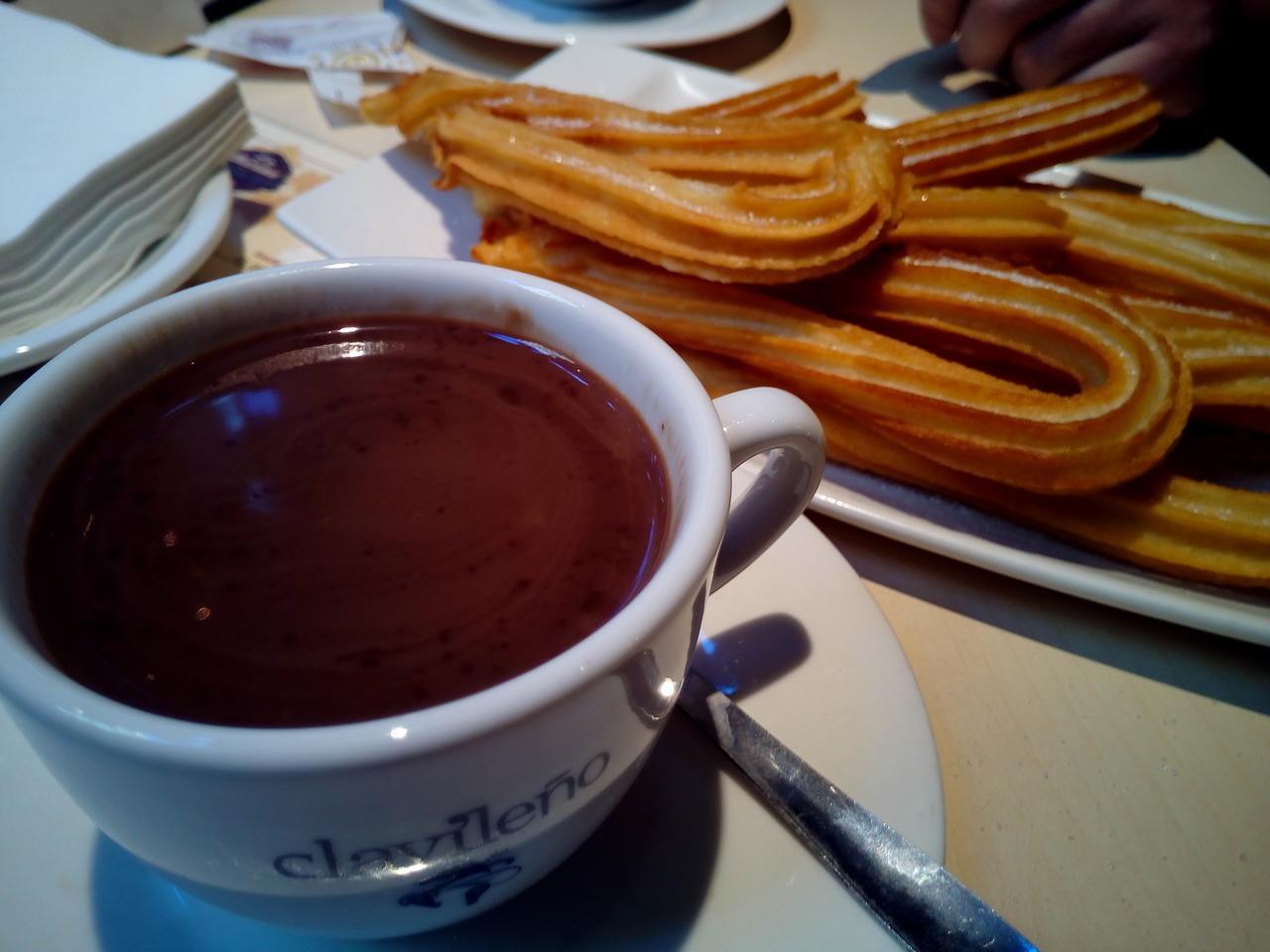 Deep fried sticks of dough sprinkled with sugar and dipped in chocolate. What more could you ask for? These are typical in late winter, but can be eaten at any time throughout the year. That’s good news for us, because there’s a chance you might get addicted. 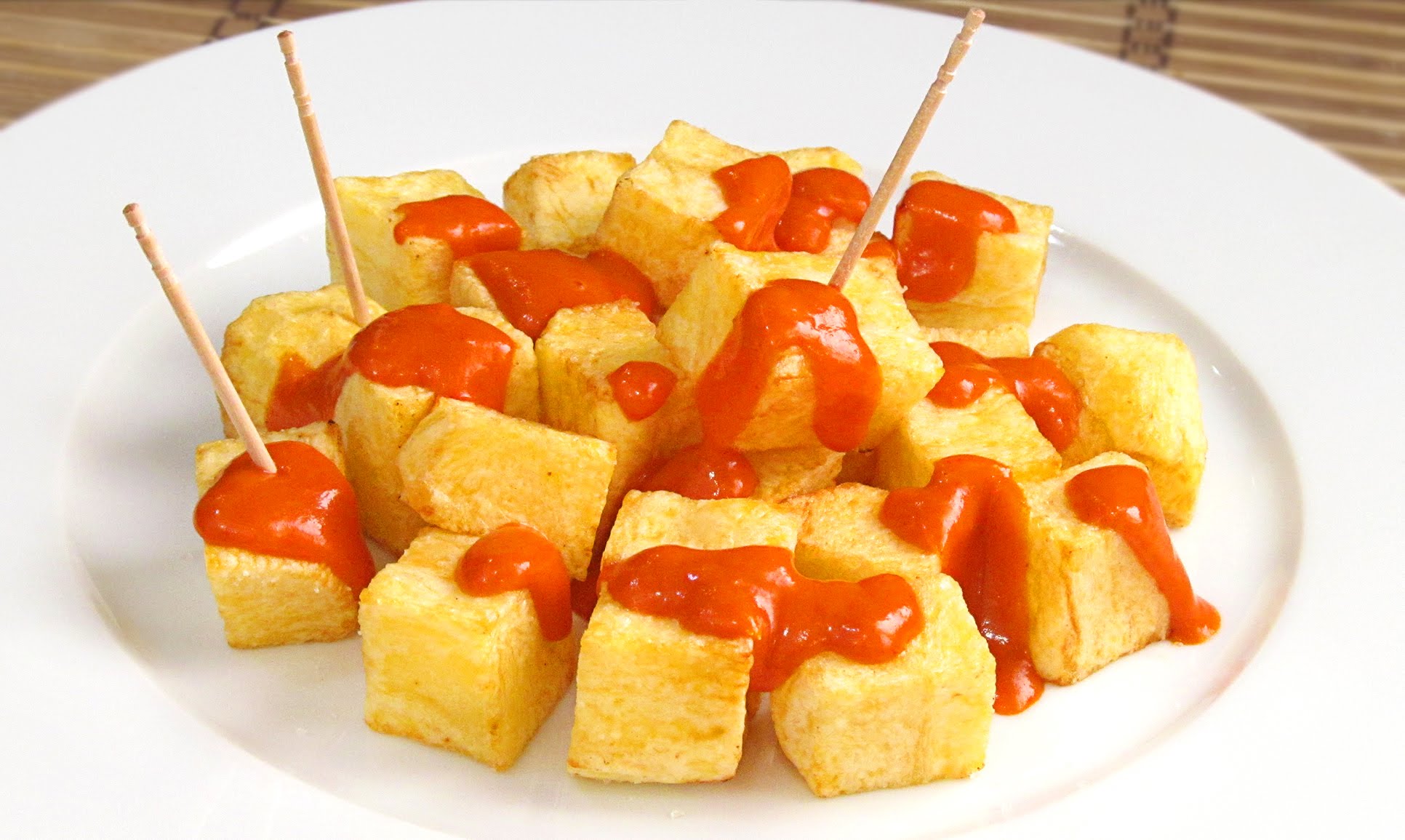 This is one of the most typical tapas in Spain. For those of you who don’t know, tapas are small dishes of food that are generally meant to share. These little beauties are fried potatoes with a heavenly garlic aioli and a slightly spicey red “bravas” sauce. 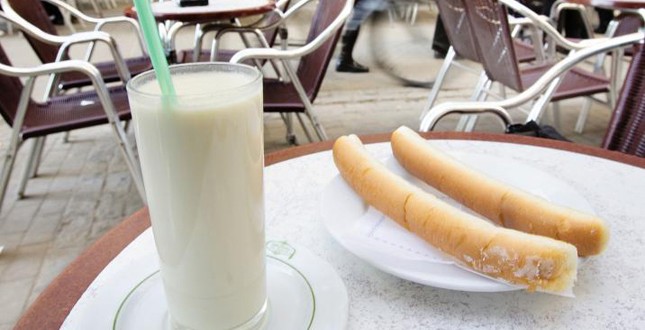 Horchata is a milky drink made from tiger nuts. Horchata is loosely translated to golden darling, and we can see why. This delicious and sweet tiger nut milk is made even better when you use it to dip fartons, a fried pastry. 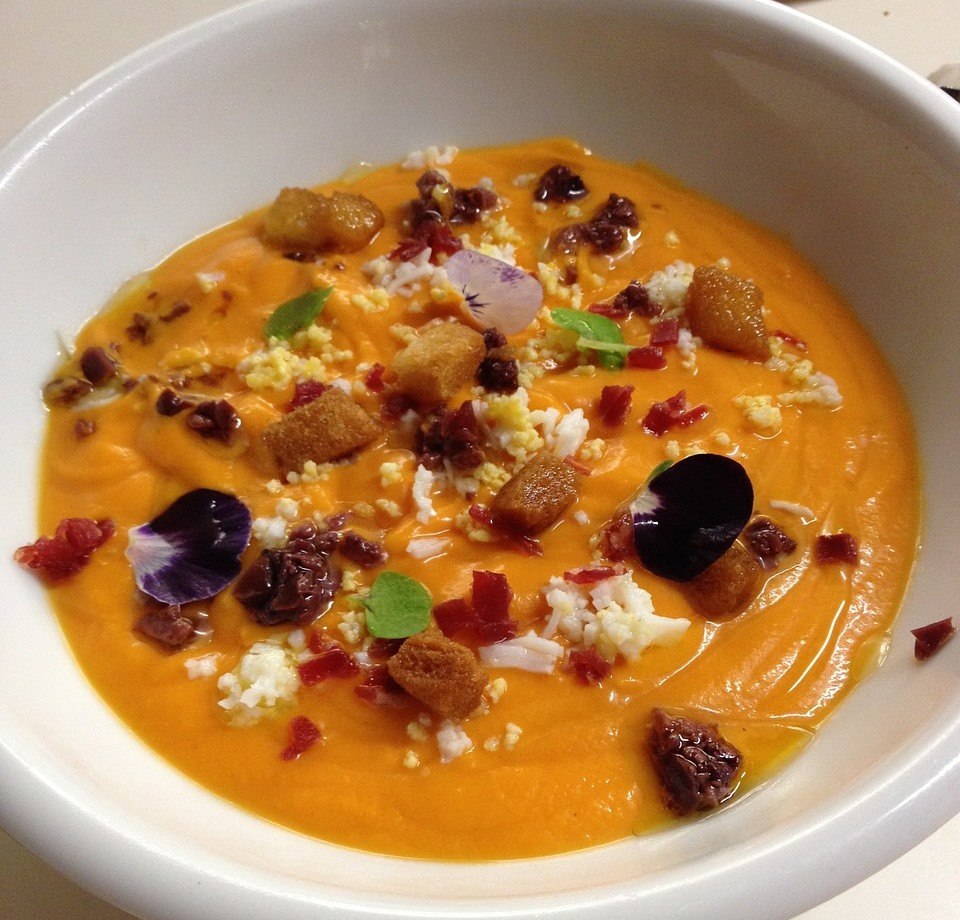 Much like gazpacho, salmonejo is a cold soup. However, this one is a bit thicker and creamier as it’s made by blending veggies, bread, oil, vinegar, and egg. 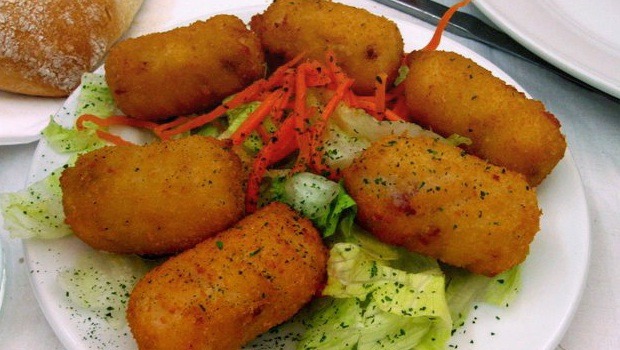 These babies are deep-fried golden goodness. Croquettas are small and creamy rolls of breadcrumbs that can be filled with almost anything. The most typical Spanish croquettas are jamon (Spanish ham), bacalao (cod), or mushroom. 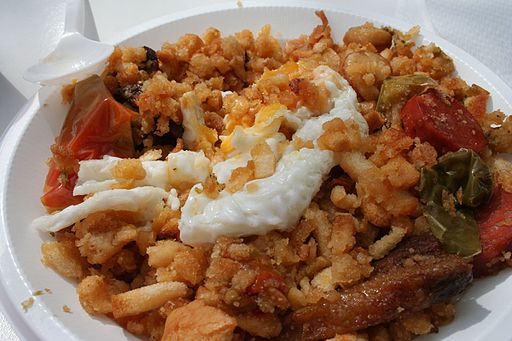 Migas is a dish that makes use out of the stale but still somehow delicious leftover Spanish bakery bread. It’s made by soaking the bread in water with spices such as paprika and garlic with a bit of olive oil. It also has spinach or sprouts, and in some areas of Spain it includes meats.

Morcilla may not be for the squeamish, as it is a sausage made from pork blood. Its very dark purple/almost black colour may put you off a bit, but put that out of your mind for a moment and take the plunge. It’s actually quite delicious! 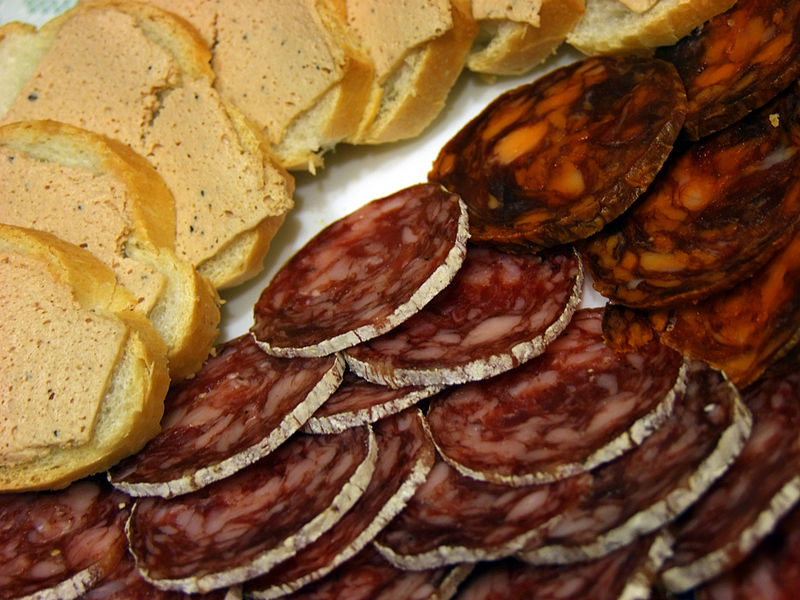 These two meats are staples of the Spanish diet and can be found at virtually any Spanish restaurant or bar. Chorizo is a pork sausage that is spiced with paprika and can be either spicy (picante) or sweet (dulce). Jamon is cured ham that is typically served on a platter with Spanish cheese, or eaten on sandwiches (bocadillos).

This is a soup or stew type dish made from beans, meat, and veggies which are boiled together until they form a thick mushy soup. It’s more appetizing than it sounds, I promise. 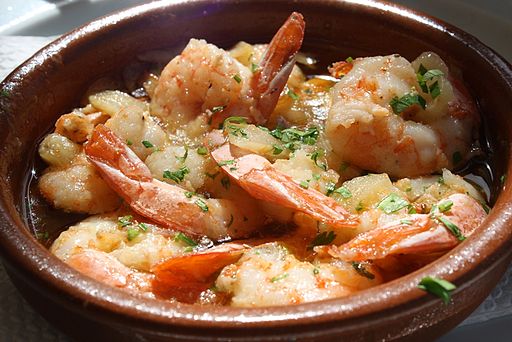 When ordering tapas in Spain, you can’t forget about the garlic shrimp. These are one of the most popular tapas, because the shrimps in Spain are incredible

Cocido is a meal made by boiling together meats and vegetables. The meats are usually chicken, jamon, sausage, pig’s feet and lamb. The vegetables that are normally used are cabbage, carrots, potato, turnip, and celery. The broth that is rendered from boiling these is typically eaten with pasta before the cocido. 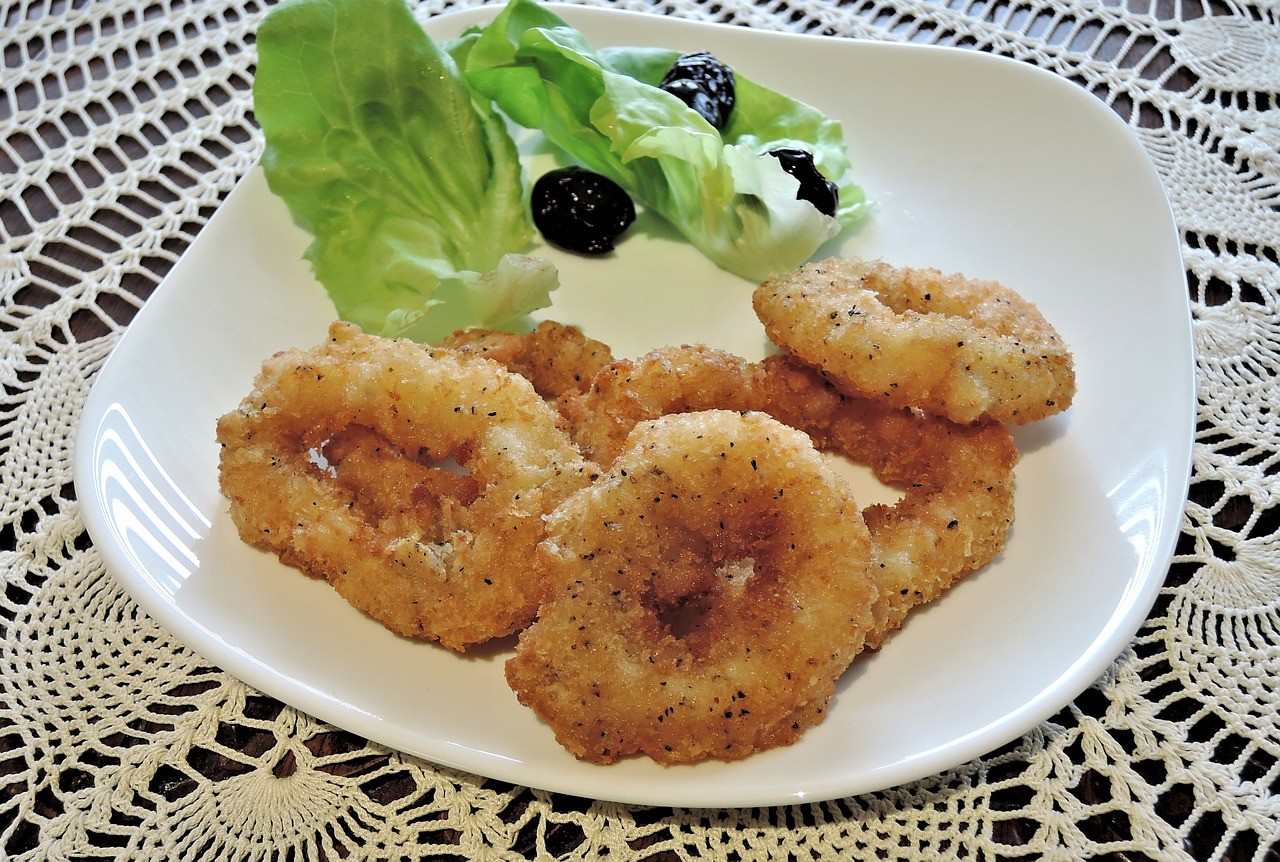 This is a dish that you’ve probably tried, or at least heard of. Calamari a la Romana is squid rings that are battered and deep-fried, similar to onion rings. Served with a lemon to squeeze over top. Excellent when paired with an ice-cold Spanish beer. 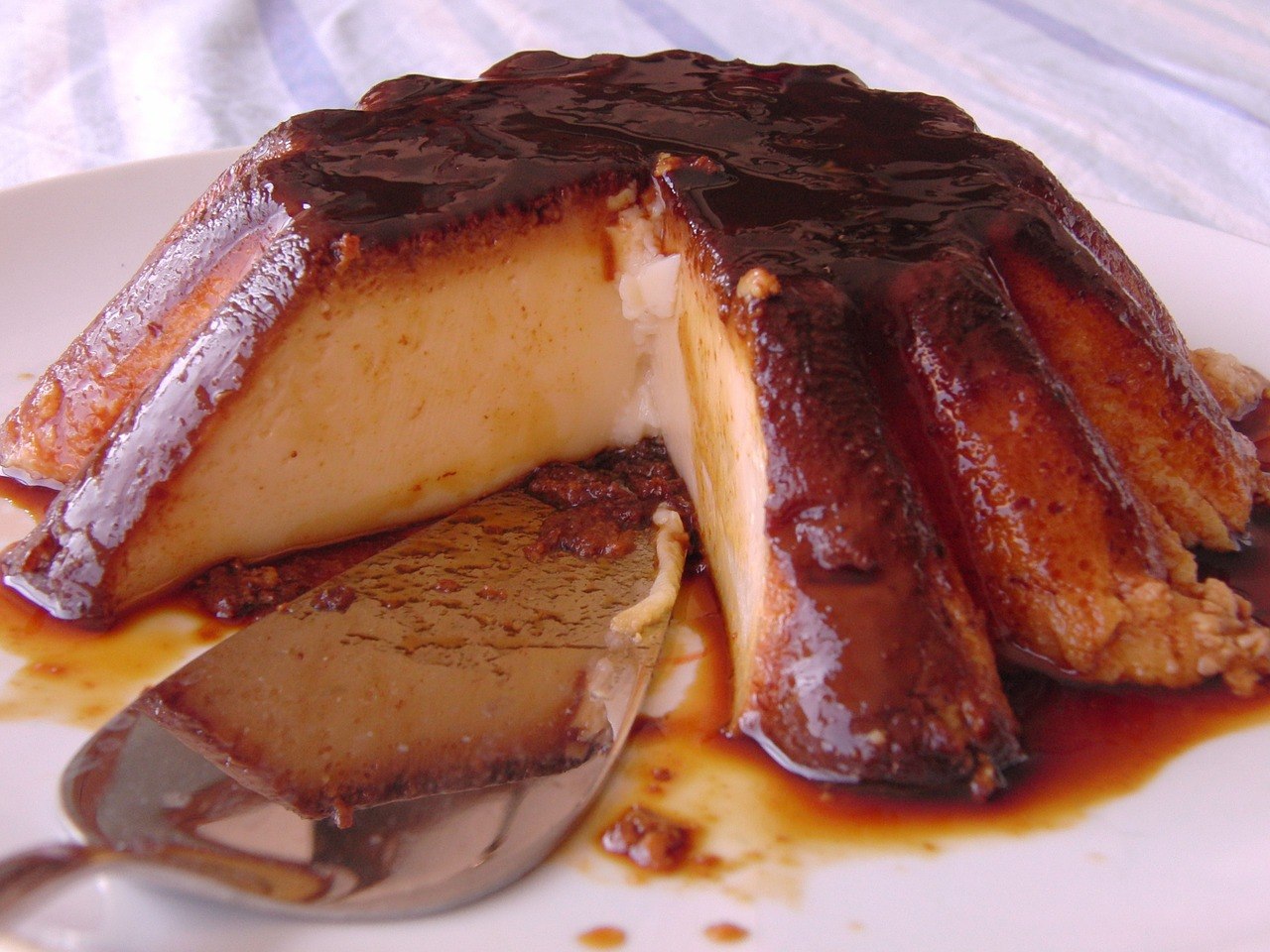 Open any home refrigerator in Spain and it’s almost guaranteed that somewhere in there you will find flan. Flan is a sort of custard dessert that can be eaten plain, or flavoured with things like coffee or caramel. 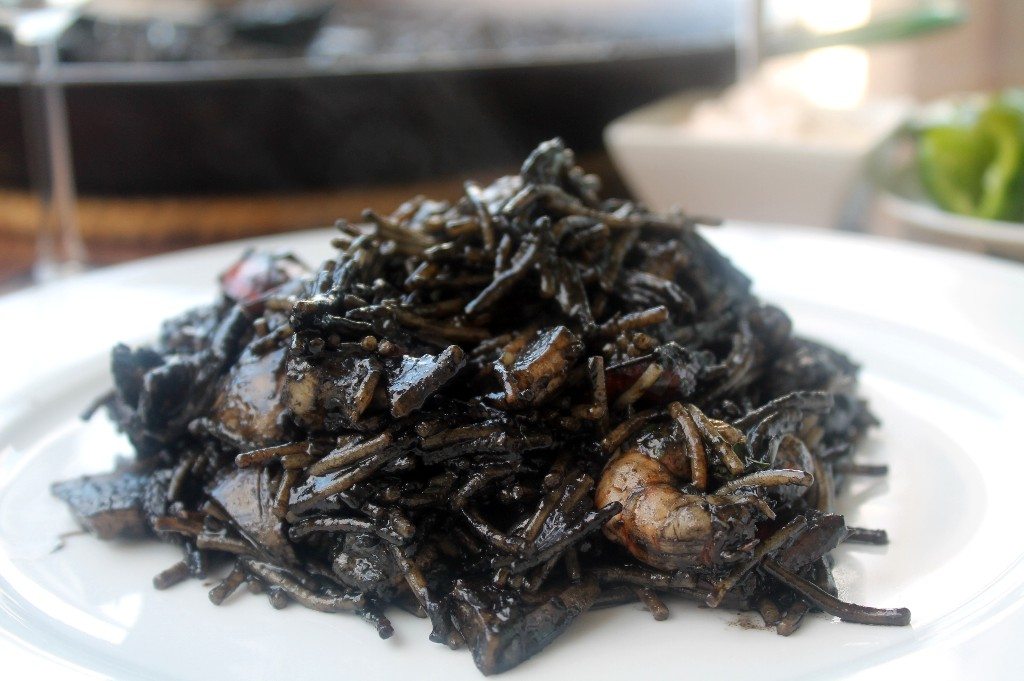 This dish is similar to paella, but made with small thin pasta instead of rice. It usually includes seafood such as squid. The one pictured is fideua negra made with squid ink. It may make your mouth a little black, but the heavenly favour is worth it. Trust us on this one. 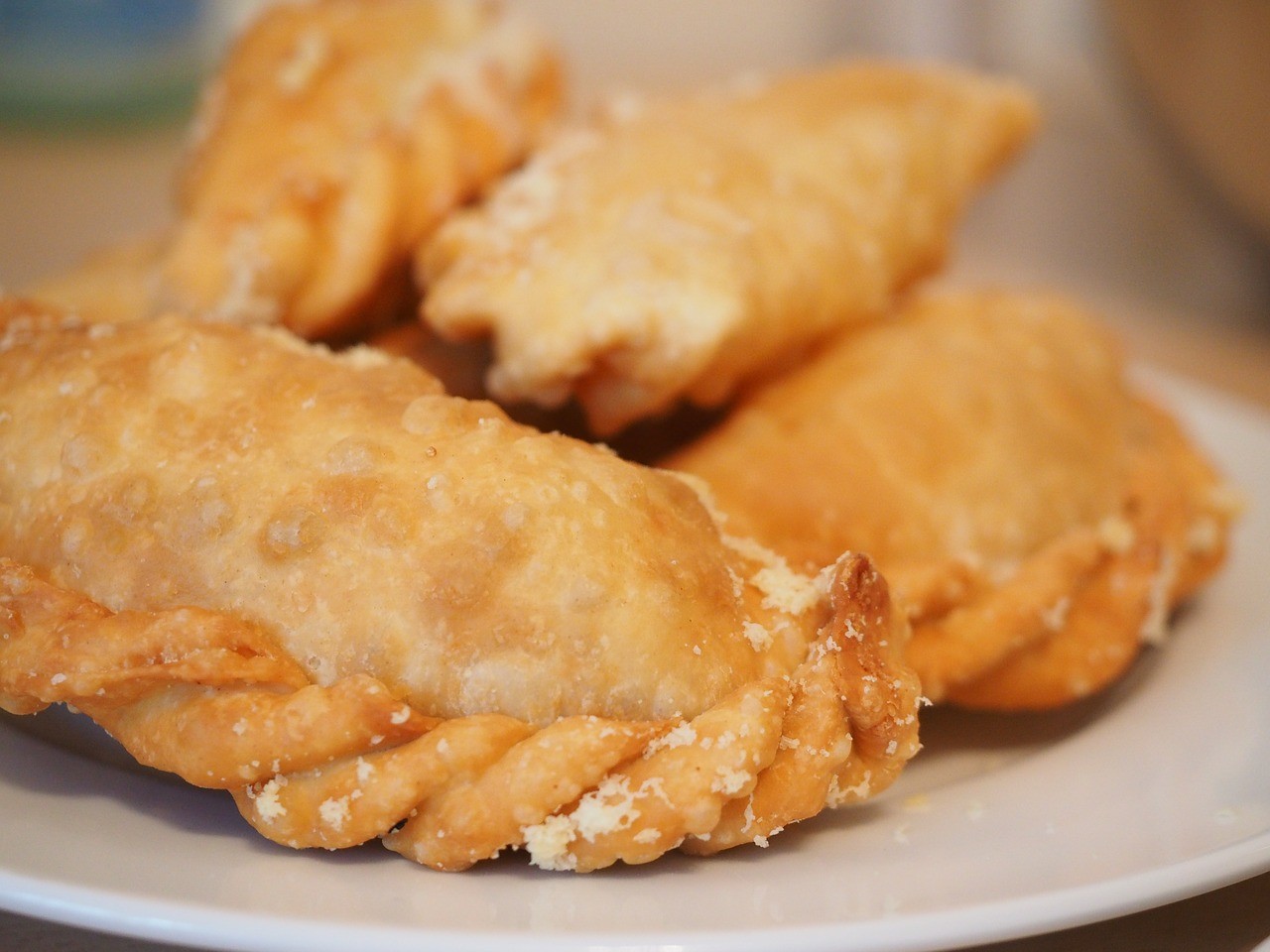 These can be found at almost any bakery in Spain, which means you’ll have to find a way to resist buying them at every street corner when passing by bakery windows. Empanadas are pastries that can be filled with many things, but the two most typical kinds are spinach or tomato. For you vegetarians out there, beware: the tomato ones usually contain tuna.

Squid cooked with paprika and olive oil. There are entire restaurants in Spain dedicated to this dish, which are called “Pulperias”. That just goes to show how much the Spanish love their pulpo. 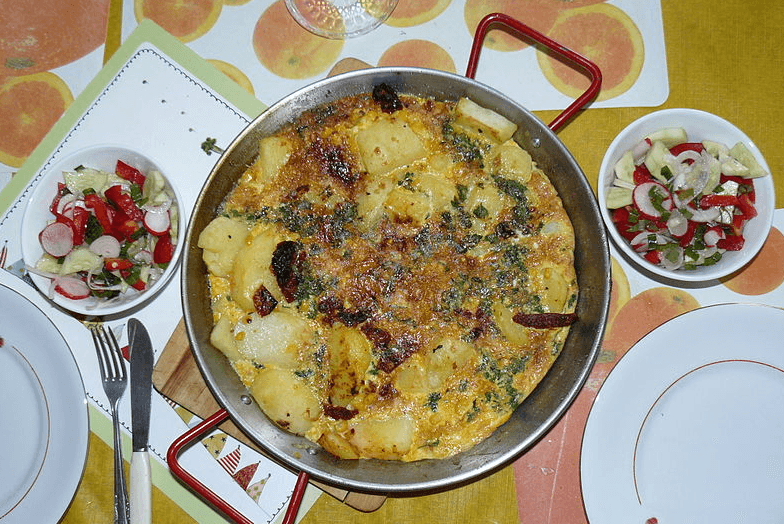 Spanish omelette, or “tortilla de patatas”, is a dish that you can find in almost any Spanish restaurant—and with good reason! It is an omelette made with potatoes and onion, and may just be the definition of bliss.

If you’re headed to Spain, feel free to use this list as a sort of “Spanish bucket list” of foods you have to try while you’re in the country. But be warned: after trying all of this amazing food, you might not want to leave.

What else do you want to add to this list? Let us know in the comments!

Traveling to a Spanish-speaking destination soon? This might help!