Spanish Direct and Indirect Object Pronouns (Not to be Confused with Reflexive Pronouns!)

You might have seen little words in Spanish like me, te, lo, nos, etc. These words are called object pronouns (los pronombres personales de complemento) which can be split into three types: 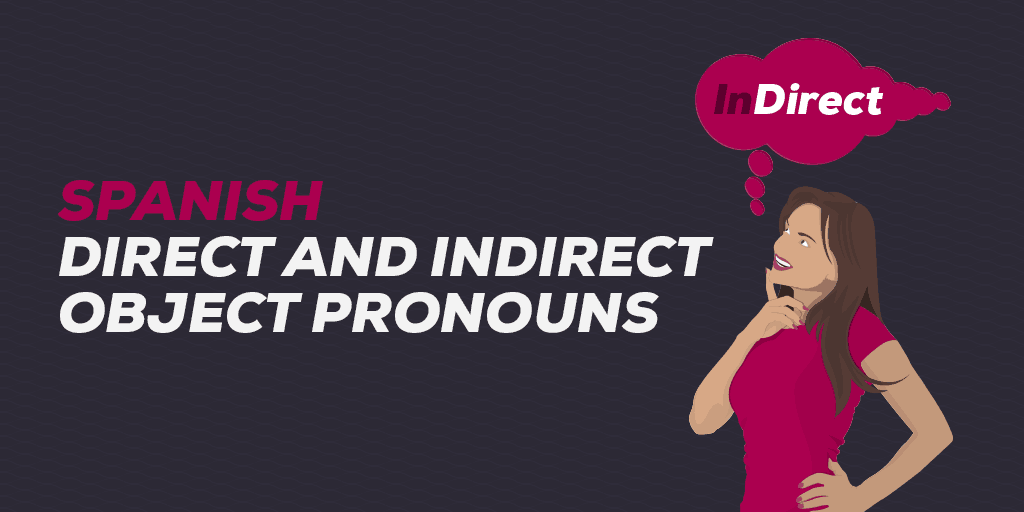 With this article we aim to show you how to use direct and indirect object pronouns, and not to confuse them with reflexive ones!

To make things clearer, we’ve color-coded things for you!

Direct object pronouns are used to refer to the object of the sentence, i.e. the thing that’s having something done to it. For example, the direct object in this example is ‘the car’:

This can be translated as:

But sometimes we don’t want to keep repeating ‘the car’—we prefer to say ‘it.’

In this case, lo is the direct object pronoun.

This table shows you all the direct object pronouns, as you might want to say that David washes me, you, him, her, us, you, them, etc.

All you have to do is find your subject and your verb, and ask who or what is being ~verbed~ by David.

This can be translated as:

Sometimes, if we know for a fact that the interaction is between José and Irina, we’ll quit repeating her name.

Check out this table. It shows you all the indirect object pronouns, as you might want to say that José gives the gift to me, to you, to him, to her, to us, to you, to them, etc.

All you have to do is find who or what is on the receiving end of the verb.

This is how the verb gustar works! ‘Me gusta’ doesn’t technically mean ‘I like.’ It means ‘it is pleasing TO me.’ There’s no direct object in this case.

Sometimes it can be difficult to identify whether an object is direct or indirect. Think of it like this:

Direct: who/what is being verbed?

Indirect: who/what is that object being verbed TO?

If that’s not clear yet, don’t worry!

Most of the time, you don’t even have to be certain which one you’re using. The only ones that differ are lo/la/los/las vs. le/le/les.

They’re kind of a mouthful to say (try saying ‘Laura les la dio’ three times fast) so we change the le or les to a se. This does NOT mean we’re dealing with reflexive verbs or anything like that. Just makes it easier to pronounce. Easy peasy!

As you know, word order in Spanish can be different from how it is in English. There are a few rules when it comes to word order of pronouns in different situations.

If you’ve got one of each, stick the indirect one first.

Order with infinitives—either before or after

You can whack object pronouns straight onto the ends of infinitives.

Order with the gerund

This works the same as it does with the infinitive. You can choose where to put the object pronoun(s).

Order with the present tense

With the present tense, both direct and indirect object pronouns go before the verb (the indirect comes first).

Order with the perfect tense

The same rule applies to the perfect tense—indirect then direct then verbs!

Order with the preterite

The rule is the same again for this version of the past tense! ☺

When you’re telling someone to do something, just stick the object pronouns on the end of the verb. Indirect then direct.

When you have to tell someone NOT to do something, the object pronouns go between the no and the verb.

Don’t confuse them with reflexive pronouns!

Reflexive pronouns are tiny words which look very similar to object pronouns, so try not to get them confused. Reflexive pronouns tell us a verb is reflexive, i.e. it’s something that you do to yourself, e.g. lavarse las manos (to wash one’s own hands). They are:

When a reflexive pronoun is thrown into the mix, just make sure you put it before any object pronouns.

Here’s an example. We put it before the direct object pronoun:

Watch out for se, as it could be reflexive OR it could just be the easier-to-pronounce-object-pronoun-combo that we looked at earlier!

... but we hope this has given you a solid foundation for using direct and indirect object pronouns in all kinds of different situations. Be sure to practice a little every day. ¡Hasta la próxima!

Subscribe to the weekly newsletter and get an emailed lesson each week. Plus download the FREE Spanish Learning Package!