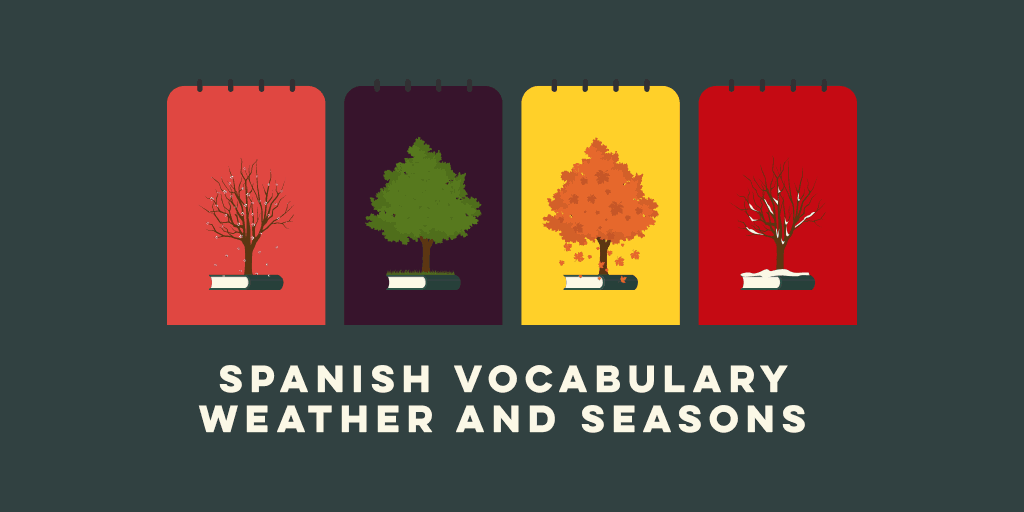 The weather is usually a go-to topic for small talk. So when you’re learning Spanish, you better learn all about Spanish weather vocabulary, too!

In this article, let’s take a look at weather and seasons vocabulary in Spanish. Plus, a bit of easy examples on how you can use them in sentences.

Want a more straightforward copy of this list in PDF format? You can download a copy by signing up below! You’ll also receive a massive amount of Spanish learning materials when you do!

Don’t you just love it when it snows? Yeah, until it’s too much, that is. To say snowing in Spanish, you say nevando.

Is it raining? The Spanish word for that is lloviendo.

Is it cloudy outside? Don’t let it put a damper on your day! Take it as a chance to say cloudy in Spanish!

When it’s foggy out, remember to say “neblina” in Spanish!

This one’s quite easy. To say breeze in Spanish, simply say brisa!

Windy in Spanish is called ventoso.

When it’s sunny out, it’s soleado in Spanish!

Nothing beats a cool day out. Not too cold, not too warm. Just cool. It’s fresco.

Feeling warm when you stepped outside? In Spanish, we say caluroso!

Some like it hot, some don’t! When it’s hot, you say calor in Spanish.

How do you say humid in Spanish? You say húmedo!

Don’t you just love looking at clear skies? I know I do!

Now here’s another easy one. Just replace the e with an a and you’ve got temperatura.

Do you love the snow? I sure do!

The rain sometimes bring complicated feelings in people. Some love it while some feel an intense sadness. Which one are you?

How do you call a light rain or drizzle in Spanish? You say lloviznar!

A lightning can be both beautiful and scary at the same time. The Spanish call it relámpago.

After the flash of lightning comes the thunder or un trueno.

Frost in Spanish is escarcha.

Dew in Spanish is el rocío  or el sereno. It is also an adjective that means serene. Doesn’t dewy grass look serene though?

Oh look, a storm’s coming to torment you! La tormenta!

How about when there’s hail? How do you say that in Spanish? You say granizo!

A rainstorm in Spanish is called un aguacero.

Tornado is also tornado in Spanish. Easy peasy. Just the word though, not the weather condition.

Even the word is already scary! Hurricane in Spanish is el huracán.

The key here is to remember that when you’re “inundated” with something, you’re also flooded, right? in Spanish, a flood is inundación.

Afraid of earthquakes? You have every reason to be! In Spanish, we call it terremoto.

The Different Seasons in Spanish

Summertime! The time when vacations are aplenty and the beaches are crammed with people. It’s called verano in Spanish.

Time to bundle up--winter is here! The Spanish refer to it as invierno.

Spring is in the air! Flowers are in bloom and trees are vibrant in green. It’s primavera in Spanish!

There you have it, Spanish words related to weather and seasons.

Once again, you can download a copy of this list in PDF format when you subscribe below! You’ll get the PDF of this list plus lots of other freebies such as the e-book 100 Days of Spanish Vocabulary and Expressions, MP3 files for your listening practice, and so much more!

Previous Post Spanish Direct and Indirect Object Pronouns (Not to be Confused with Reflexive Pronouns!) Next Post A Quick Guide to the Spanish Gerund