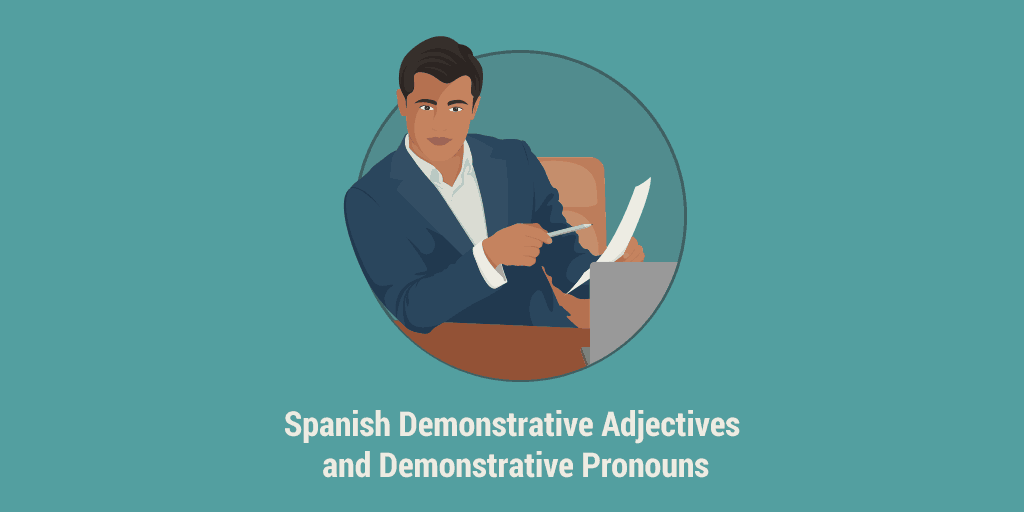 What is a demonstrative adjective?

Demonstratives demonstrate which thing is being talked about. Adjectives are words that modify nouns. So basically, a demonstrative adjective is a word that you put before a noun, and it specifies which noun you’re referring to if there’s any ambiguity (e.g. ‘this egg’ vs. ‘that egg’).

In English, we distinguish between ‘this’ and ‘that.’ In Spanish, there’s one additional level. Spanish speakers differentiate between ‘that which isn’t right next to me but isn’t too far away’ and ‘that all the way over there.’ In other words, there are two different versions of ‘that’ depending on how far away the object is (more on that later)!

So, the Spanish demonstrative adjectives are these:

How do Spanish demonstrative adjectives work?

Because they’re adjectives, we put them before nouns. The demonstrative adjective that you use has to agree in gender (masculine or feminine) and number (singular or plural) with the noun it’s modifying. We’ve listed all the gender and number options above.

Here are some examples for you to read, to help give you some context and understand how to use Spanish demonstrative adjectives.

For native English speakers, correctly differentiating between ese (that) and aquel (that over there) can take a while to master. Here are some sentences that make use of ‘this,’ ‘that,’ and ‘that over there’ so you can see the difference.

What is a Spanish demonstrative pronoun?

Now we’re done with adjectives, let’s look at pronouns. As we said earlier, demonstratives demonstrate which thing someone is talking about. Pronouns are words that replace nouns. So basically, a demonstrative pronoun is a word that you use instead of a noun, and it specifies which noun you’re referring to.

Demonstrative pronouns are useful when we don’t have to give as much context. If we already know we’re talking about cars, we don’t need to say ‘this car’ and ‘that car.’ Instead, we can just say ‘this one’ and ‘that one.’

So, the Spanish demonstrative pronouns are these:

An important note on spelling...

It’s good for you to be aware of this, because a heap of what you read will still use the old rules. But what’s the new rule? Leave out the accents altogether!

Because they’re pronouns, they’re used to replace nouns. The Spanish demonstrative pronoun that you choose has to agree in gender and number with the noun it’s replacing. And don’t forget to differentiate between ‘that’ and ‘that over there’!

Demonstrative pronouns are a little different from Spanish demonstrative adjectives, because, as well as masculine and feminine forms, you have a kind of genderless form, called the ‘neuter’ form.

It’s used when we’re not referring to a particular noun. It can be used to refer to ideas, statements, or sometimes objects, but not living things (if we’re talking about a person or animal, we need to figure out its gender and use the corresponding masculine or feminine pronoun).

Look through these sentences and see if they make sense!

Hopefully this article has shown you the difference between adjectives and pronouns, and taught you how to use the demonstrative forms of each. Try and spot them when you’re reading in Spanish, and think about whether you think they’re adjectives or pronouns.