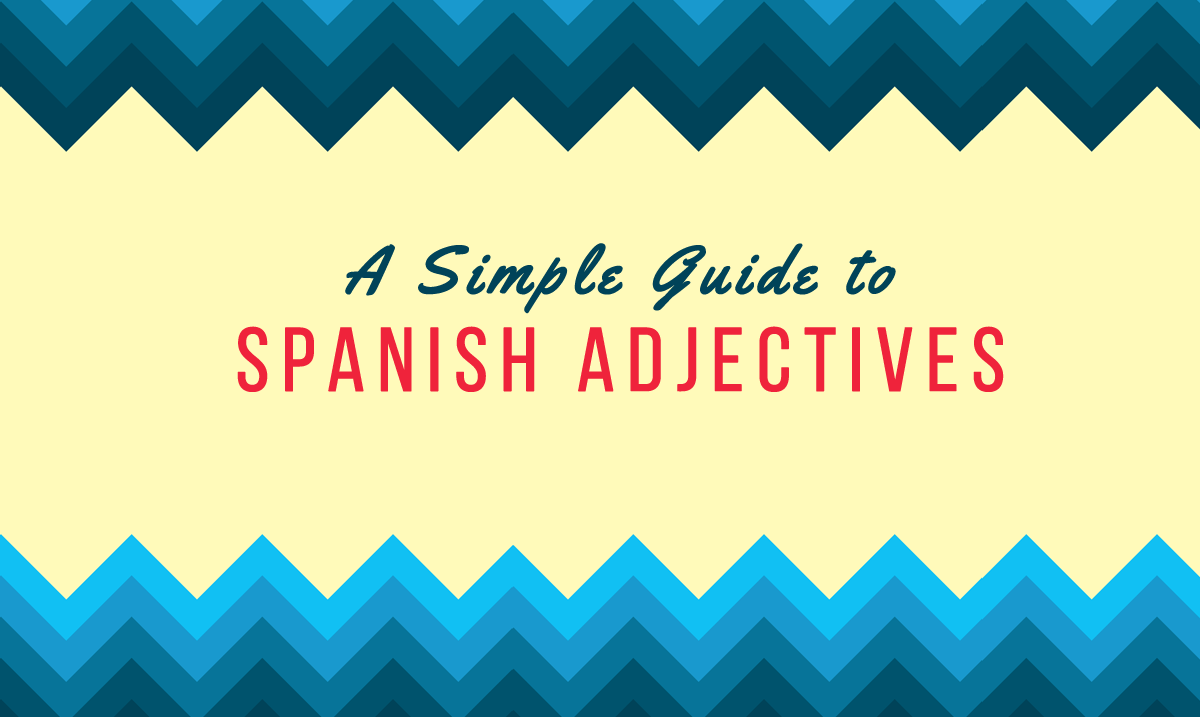 They can make a boring sentence dynamic, a nice sentiment sweeter and a harsh word, well… even harsher.
If you want to be able to do anything in terms of describing something, you need to be able to use this handy, and necessary, part of speech!

In Spanish adjectives are a little more complicated than they are in English. But don’t fret! Below you will find a quick guide to how you can spice up your conversations.

Let’s start by first figuring out what is an adjective? It’s simple, really. Adjectives are the words we add into a sentence to define our nouns. They describe a person, place, or thing.

The house- The red house

The boy- The handsome boy

The building The tall building

So, let’s look at how these parts of speech work in Spanish.

Do you need a girl or a boy adjective?

All right, it’s not really a “girl” or “boy” adjective, but one thing about Spanish that is very different from English is that words have a gender. They can be “feminine” or “masculine.”

If you’re familiar with the Spanish language, even just a little bit, you’ve realized that a lot of words end in O’s or A’s. Well, the “o” words are masculine, and the “a” words a feminine.* Like the nouns they modify, the adjectives will need to be either masculine or feminine.

For example: “The red house”- here, the word “house” in Spanish is feminine (casa) so you will need the feminine form of the adjective “red” (roja).

*Note- Not ALL nouns will end in either “o” or “a”. But ALL nouns WILL have a gender! This means it’s something you’ll have to memorize. Example: coche- (car) masculine; leche- (milk) feminine

And how many “reds” will you need?

I know this seems a little weird, but it’s really not all that difficult. Just remember your adjectives have to AGREE, AGREE!! (Two agrees, for two criteria- gender, number.)

Almost time to put it all together

Just one last little detail to throw your way before we can dive in a little deeper to the really juicy technical stuff.

In Spanish, the adjectives come after the noun.

Let’s go back to our example: “The red house”- In Spanish this little phrase would be “La casa roja.” So, literally you’re saying “The house red.”

Some adjectives will be able to take ALL the possible forms we looked at briefly above (masculine, feminine, singular, plural) while some, actually, will only take a few of them.

You will find, generally speaking, three different types of adjectives.

To make this a little easier, why don’t we look at these in a chart.

As you can see in the chart above, there are a few small differences between the three different types of adjectives you’ll find.

3. Adjective that end in a consonant

Of course, the exceptions…

Like with almost everything when learning a language, this part of speech comes with its own little list of exceptions to the rules.

This group, although they end in consonant, will in fact still have a feminine form.

Adjectives that go before the noun

There are some adjectives in Spanish that do, actually, go before the noun they are modifying.

Adjectives that change meaning when they change location

There are a handful of adjectives that can go before OR after the noun, but they will change their meaning depending on where you put them.

The most common are:

This has just been a quick overview of the basics behind using adjectives in Spanish. At first glance, this very useful part of speech may seem strange and even intimidating to the native English speaker. But, the truth is, it’s really not all that complicated! It just takes lots of practice and adjusting your mindset a little bit.

Remember--your adjectives need to AGREE, AGREE!
Do you want more articles like this? Sign up to the weekly newsletter by clicking the image below. You'll also get an awesome gift!