How to Tell Time in Spanish: The Ultimate Guide

How to Tell Time in Spanish: The Ultimate Guide 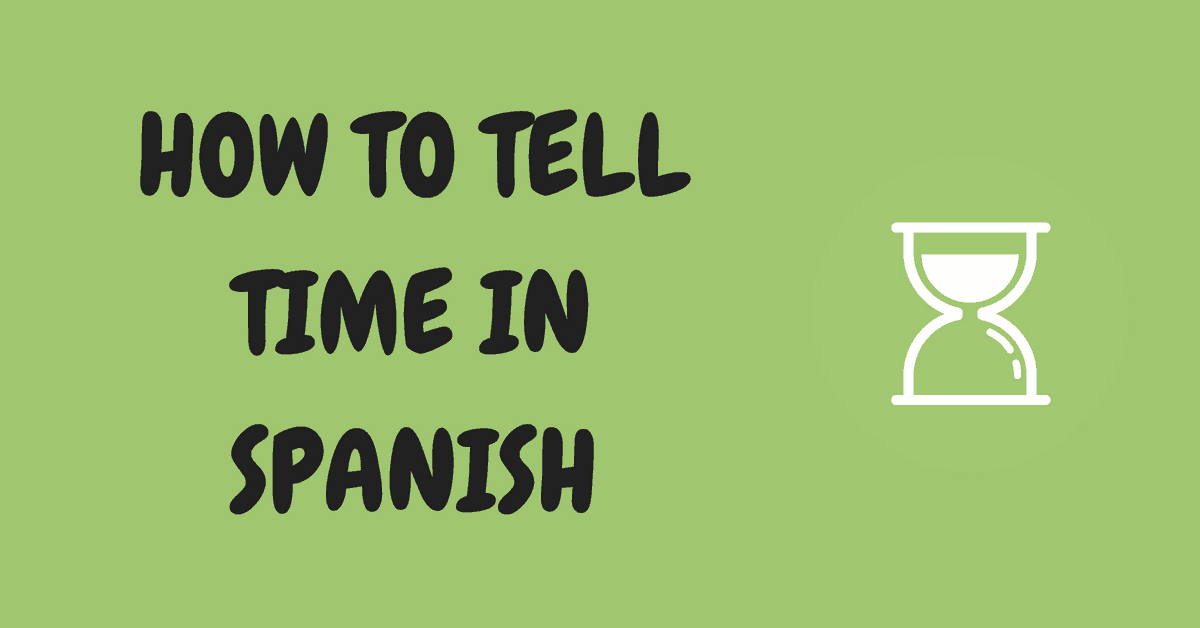 ¡Hola! Telling the time is an important skill, so we’ve given you a complete guide on how to do it in Spanish, split into handy sections. Sit back, relax, and let’s learn how to tell time in Spanish!

Let’s get started with the basics.

First up: numbers! You’ll need to know the numbers 1 to 59 to tell the time, but once you’ve mastered a few, you’ll be fine with them all. 0 to 15 are probably the most difficult to learn, because they’re all quite different.

N.B. where we’ve given pronunciations, the apostrophe at the beginning of a syllable denotes that the stress falls on that syllable, e.g. in ’oo-no, the first syllable is emphasized.

*in this article, we’ve used the “th” sound that you’d find in words like “think” or “thanks,” but in many parts of the Spanish-speaking world, including most of Latin America, the “th” sound will be replaced with a “s” sound as in “seaside.”

From 16 onward, things start to look a bit more logical. All you need to remember is that “y” (pronounced ee) means “and.”

Then we get to 20, or “veinte.” Instead of pronouncing “veinte-ee-uno,” we mush it all together, making the word flow better: “veintiuno.”

At this point, we stop mushing things together. It’s simply ‘tens’ y ‘units.’ You’ve probably got to grips with the pattern by now, but here they all are laid out just in case:

How to Ask for the Time in Spanish

Next, we want to know enough vocabulary to ask for the time!

*You might also hear “¿qué horas son?” in some parts of Latin America, but overall it’s less commonly used than “¿qué hora es?”.

To respond to this question, we use the verb “ser” (“to be”). Instead of x o’clock, Spanish speakers count hours.

How to Say o’clock in Spanish

So, let’s have a look at the following times:

"Half past" in Spanish

When it’s half past the hour, we use “y media,” (ee ’meh-dee-ah) which means “and half.” See if these examples make sense:

"Quarter past" in Spanish

To say that it’s quarter past the hour, we add “y cuarto” (ee ’kwahr-toh), which means “and quarter.”

"Quarter to" in Spanish

Like in English, we can still use the word for “quarter,” but this time we say “menos cuarto” (’meh-nohs ’kwahr-toh) meaning “minus quarter.” So, we’re taking a quarter away from the hour that we’re approaching. For instance:

Some countries will use these versions instead to mean the same thing:

"Minutes past" in Spanish

For highly specific numbers (i.e. not quarters or halves), we have a pretty simple rule! We just say the “o’clock” bit and then say “y” (“and”) and add the number of minutes past the hour! This will become clearer once we’ve seen some examples.

"Minutes to" in Spanish

And for minutes to the hour, you guessed it, we use “menos” (’meh-nohs). Simple, right?

If you’ve got all that, and want to know some extra vocab on how to tell time in Spanish (that will make you sound super native), take a look at these:

* You might also hear “y pico,” which is understood as “a few minutes past” in some places, but in other countries, it could refer to anything up to around 50 minutes past the hour.

For example, if you were reading out theater times, the page in front of you might say “15:00,” but you’d say to your friend on the phone, “it starts at 3.”

It’s time (see what I did there?) for a mini-test!

Use the guide we’ve given you and see if you can figure out what the following phrases mean.

Whether you’ve struggled with telling time in Spanish or found it pretty easy, practicing Spanish daily will help you get to grips with telling the time.

Numbers are used often in everyday life, so the more you speak, the more opportunity you’ll get to practice them! If you know any native Spanish-speakers, try and practice what you’ve learnt with them.

Possessives in Spanish: The Simple Guide

How to Introduce Yourself in Spanish (+ Free MP3)

Spanish Text Slang: How to LOL like a true Spaniard

A Simple Guide to Making Comparisons in Spanish