Spanish Pronunciation Guide: How to Sound Spanish for Beginners

Spanish Pronunciation Guide: How to Sound Spanish for Beginners 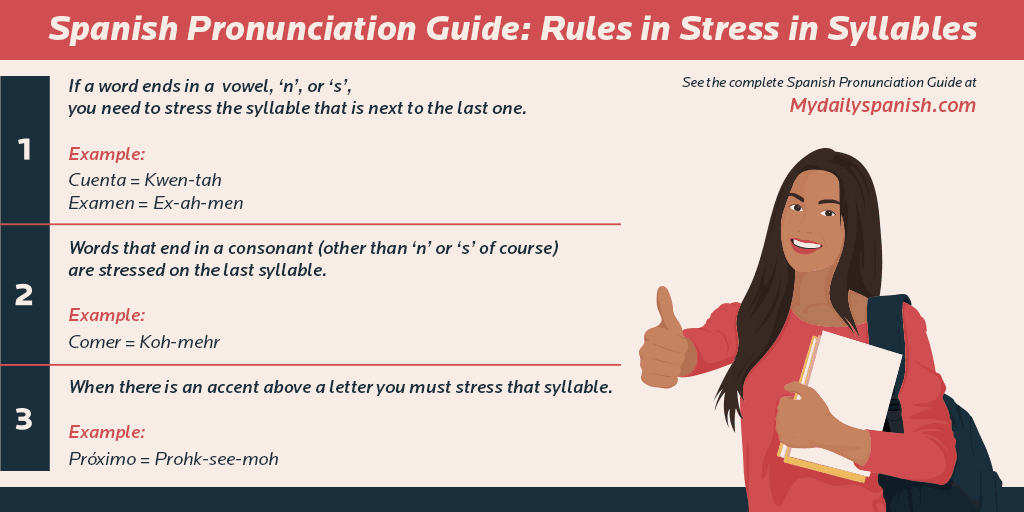 Spanish is a fairly easy language, considering that most Spanish words are pronounced exactly the way that they are spelled. It's not like English where we have some of the most absurd pronunciations. I mean, who decided that pony and bologna should rhyme?!

That being said, there are some tips and tricks to have you sounding like a local in no time. So sit back, grab a cerveza (pronounced ser-bay-tha) and let us be your guide. We will be like Gandalf, and Spanish pronunciation will be your Middle Earth.

Quick Navigation
Let's start off with an important Spanish pronunciation tip...
But... Don't stress about the Stress!
Some general rules to follow on stressing syllables
Pin this!
Spanish Pronunciation Guide: How to Pronounce Spanish Vowels
The (Usually) Constant Spanish Consonants and How to Say Them
Important things to take note about Spanish pronunciation for consonants
Bonus Topic: ¿ What's With the Upside  Down Quotation Marks?
"Tu quieres algo." / "¿ Tu quieres algo?"
Conclusion

Let's start off with an important Spanish pronunciation tip...

Something about the Spanish language that is much more important than I realized when I started learning, is which syllable you stress.

I remember getting into a cab in Spain and getting nervous when the cabbie didn't have a clue which street I was telling him to go to.

When I showed him the street name on my phone, I watched the light bulb go off above his head. He was quick to correct me and say that I had stressed the wrong syllable--- and that small mistake had prevented him from understanding me at all.

But... Don't stress about the Stress!

(I'm sorry, I had to. It was just so easy.) There are some simple rules that you can memorize so that you always know which syllable you need to stress.

So print this out, laminate it, bring it into the shower with you, take it to bed. Whatever you need to do to make sure that this is ingrained into your mind. We don't judge here.

See, that was easy. Feeling a little less stressed now? Yes, as calm as a hippy in a commune. Now before you start growing out your hair and exclusively wearing hemp clothing, let's move on to vowels!

See also: How to Make Small Talk in Spanish 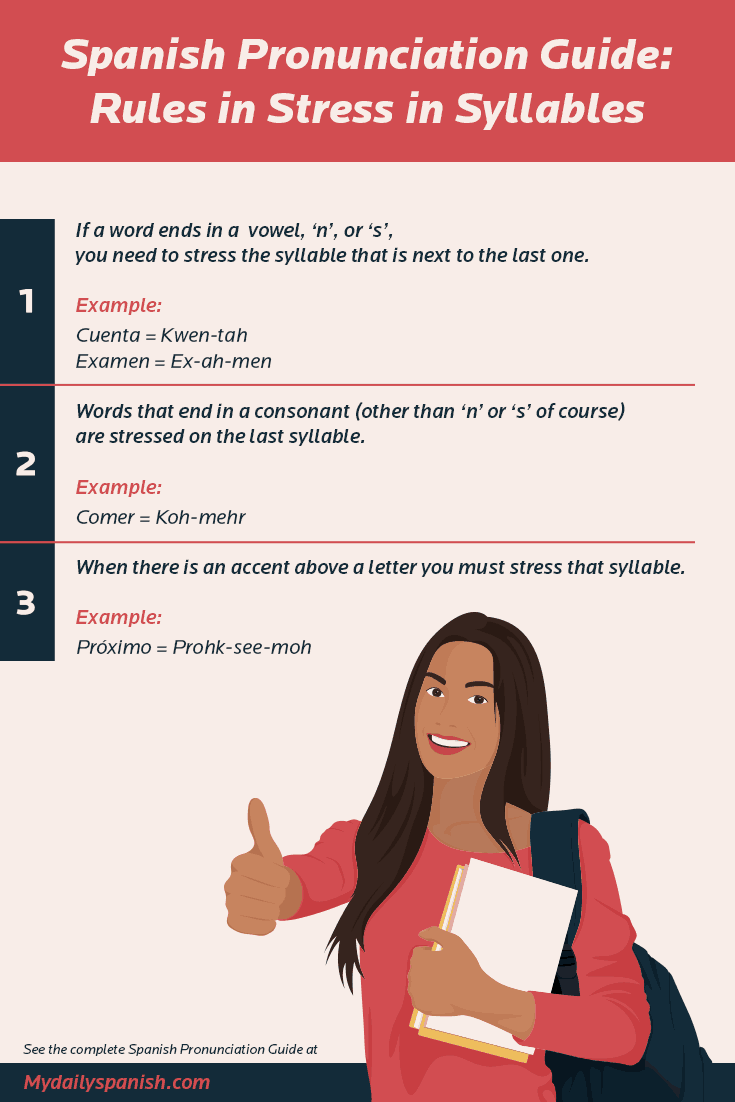 Once you know what sounds the vowels make when speaking Spanish, you're pretty well in the clear because they very seldom change. That's great for you learners out there because it means that you only need to memorize this Spanish pronunciation guide for vowels below.

Then if you're sounding out a word and you use these vowel pronunciations, there is about a 99.5%* chance you've got it right! And those are odds we'd take to Vegas, baby!

The (Usually) Constant Spanish Consonants and How to Say Them

Most of the consonants in Spanish are pronounced the same way as English. However, there are some that are different, and they can seem a little intimidating at first.

No worries though, we've gone ahead and listed all of the ones that vary from English down below. That way, instead of having to spend the time looking them up elsewhere, you can focus on more important things---like baking a birthday cake for your cat.

Important things to take note about Spanish pronunciation for consonants

Bonus Topic: ¿ What's With the Upside  Down Quotation Marks?

You know how when you're reading something in English you generally ("generally" because English is weird and there are always exceptions. Eye roll.) know that it's a question before you get to the question mark at the end because of the word at the beginning? Por ejemplo: "Do you want something?"

I'm assuming that when reading that question, you put an upward inflection on it. That's because the word "do" tipped you off that it was a question and not a statement. Well, in Spanish they don't do that. Let me show you what I mean.

But the only way to tell the difference is by the punctuation. So if you were reading the question, and  there was no question mark doing a handstand at the beginning of it, you wouldn't know that it was a question until you got to the end.

The same goes for when you're speaking. It's super important to make sure that when asking a question, the inflection of your voice goes up.

It has to be clearly different than the inflection that you use when making a statement. If not, you could end up saying something different than what you intended, and it could be a little embarrassing.

Yes, I did have an embarrassing experience with this. No, I'm not going to tell you about it.

Hopefully this Spanish pronunciation guide has helped you navigate through all of the pronunciation confusion. If not, take another big swig of that cerveza we opened at the beginning and have another look. I always find my Spanish to be better after a few drinks.

Now go ahead and start practicing your Spanish pronunciation with these wise Spanish proverbs!

Want a copy of this article in a printer-friendly PDF format? Simply subscribe to the newsletter below and download the MP3 copy of the audio guide as part of the Spanish learning package!

About the Author Nicole Dovak

Nicole Dovak is a 20-something Canadian writer who moved to Spain in September 2015. Living with a Spanish host family for one year allowed her to gain insights into Spanish culture and language (and not to mention tons of yummy Spanish food).

Previous Post How to Make a Spanish Learning Habit: A Guide For Language Learners Next Post The Passive Se and Impersonal Se in Spanish