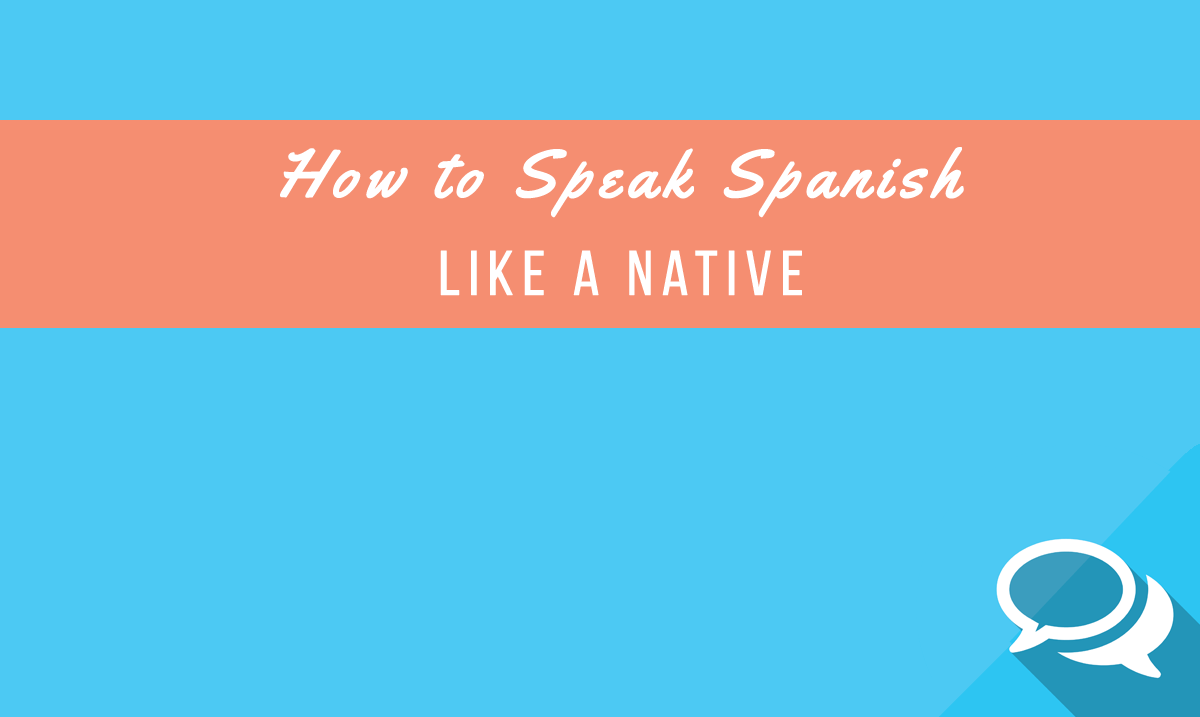 The biggest compliment a language learner can receive is being confused for a native speaker.

It’s one of those things that makes you feel like you’re floating on air. So, how can you, as a student of Spanish, take your speaking abilities up a notch and fool others into thinking you’re actually from Spain? Read on to find out!

Spaniards have a slew of expressions and idioms that seem to always slip into their conversations.  It’s rare that you have a conversation that doesn’t include one! If you want to sound more like a native speaker, you should try to work some in as well.

Some of the most common are:

Example: “Tengo mucho que hacer pero no tengo bastante tiempo. No doy abasto.”- I have a lot to do but I don’t have enough time. I can’t cope.

Example: “Mañana tengo el examen de ciencias y no he estudiado mucho. Me ha pillado el toro.”- Tomorrow I have a science test and I haven’t studied much. I’m out of time/ I’m in trouble.

“Eramos pocos y parió la abuela” literally means “there were a few of us, and the grandmother gave birth.” It’s a really weird expression, but used very frequently.

Example: “Voy a sacar partido del finde y hacer muchas cosas.”- I’m going to make good use of the weekend and do a lot.

Example: “Harás muy bien en el trabajo, solo tienes que darle caña.”- You’ll do really well in the job. You just have to give it all you got.”

Not unlike expressions or idioms, proverbs are fun little sayings that seem to carry with them a sort of message or meaning. These are also common in Spain, and you’ll hear them quite frequently. Using them will not only make you seem wise and insightful, but they will also help to convince the people around you that you’re more than just your typical Spanish language learner.

Here are a few fun, and commonly used Spanish proverbs to get you started.

3. Talk with your Hands

The Italians are known for using their hands when speaking, but the Spanish do this a lot as well. Not only do they emphatically move their hands about when saying pretty much anything, but they even have a few basic gestures which have their own meanings!

Picture this- you walk into a crowded bar with your friends. There’s nowhere to sit, and it’s really loud. Instead of yelling over the music and everyone else who is talking all at once, you can simply make two quick motions to let your group know “it’s crowded” and “let’s go somewhere else.”

This is just an example. There are a lot of different ways of “talking with your hands” in Spanish. If you want to fit in with the natives, make sure you move your hands a lot when speaking and try to pick up on some of the commonly used gestures.

The two videos below will show you not only some great hand gestures that are really common in Spain but also teach you a few more useful expressions!

This is something that is specific to Spain. In Latin American countries, you may not find this to be very common, so be careful.

In Spain, the “usted” conjugation (the formal, singular “you”) and the “ustedes” (the formal, plural “you”) are almost completely reserved for very very specific situations- with your boss, or at a meeting, or when you’re speaking to an elderly person you don’t know very well. Outside of this, you will almost always hear the “tú” (informal, singular “you”) or the “vosotros” (informal, plural “you”).

Not only will you not hear the formal “you” used very often, but you won’t hear a lot of “If you don’t mind…” or “sorry to bother you, but…”. There probably won’t even be a lot of “please” and “thank you” going around.

If you feel like you must, you can throw in a “please” or “thank you” but don’t be surprised if you don’t hear others around you doing so. In Spain, it’s always better to be direct.

Every country has it’s own fillers. In English we say things like, “um…” or “you know…”. In Spanish they have a whole bunch of their own as well!

Here are some very common ones:

This is a pretty obvious one. Non-native speakers tend to talk a little more slowly, thinking out what they want to say. A lot of time we’re so obsessed with making sure our vocabulary and grammar is correct, that we end up not really saying anything. This is a dead giveaway that you’re not a native Spanish speaker.

When if you want to sound more authentic, you should not only should you work on getting past that, but, also know that in Spain people tend to speak quickly in general. This is true especially if you’re in the south.

So, if you want to sound more native you have to 1) get over your obsession to say everything perfectly and just let it flow and 2) once you get it flowing, make it flows a little faster.

A lot of the shorter words in Spanish are shortened even further! For example, instead of saying “para” you’ll hear “pa’.” Or, in place of “todo” a lot of people will say “to’.”

This may also happen with the endings of some words. It’s very common, for example, with the participle form of verbs. Take, for instance, the conjugation “he hablado” (I have spoken). When said (quickly) like a native speaker, this will sound like “he habla’o.” The “d” between the vowels gets “eaten.”

Fun Side Note: Saying you’ve “eaten” your words or letters is a very common thing in Spanish as well. Es difícil entenderle porque come las palabras– It’s hard to understand him because “he eats” (mumbles- doesn’t articulate) his words.

The Spanish are very emotional people. It always sounds like they’re mad, when in reality they’re not. They could be excited, upset, or just merely just saying “good morning” to their neighbor.

So, don’t be afraid to be more emphatic when you speak. Get excited, let your emotions come out! It’s okay, everyone else is doing it, too.
Be careful, though. There is definitely a place and a time for this. Like everything, there is a set of social norms and expectations that go along with when it’s okay to “chillar” (yell) and when it’s not. When you’re out on the street, yell your heart out. But, when you’re sitting inside at a restaurant or walking through the grocery store, you’re going to want to keep it down to a normal volume.

Of course, if you want to sound like someone who speaks like a native, you have to say what the natives are saying! Slang is a great way to do this. It’s always changing, so it’s hard to catch on to. You can pick up on a lot of it by not only listening to the people around you, but also by watching TV shows and listening to the popular music that the country produces.

Some slang terms in Spain that have been around for awhile (so you know they’re not going anywhere anytime soon) are:

Example: “Necesito un trabajo. No tengo nada de pasta.”- I need a job. I don’t have any money.

Being able to speak like a native doesn’t only involve vocabulary and grammar (although those are very important). It goes much deeper than that. Every country has its own way of communicating. There are different nuances to the way people interact with one another.

If you want to seem more like a native Spanish speaker, then incorporating some of the aforementioned elements will certainly help!

Did I miss anything? Let me know in the comments!