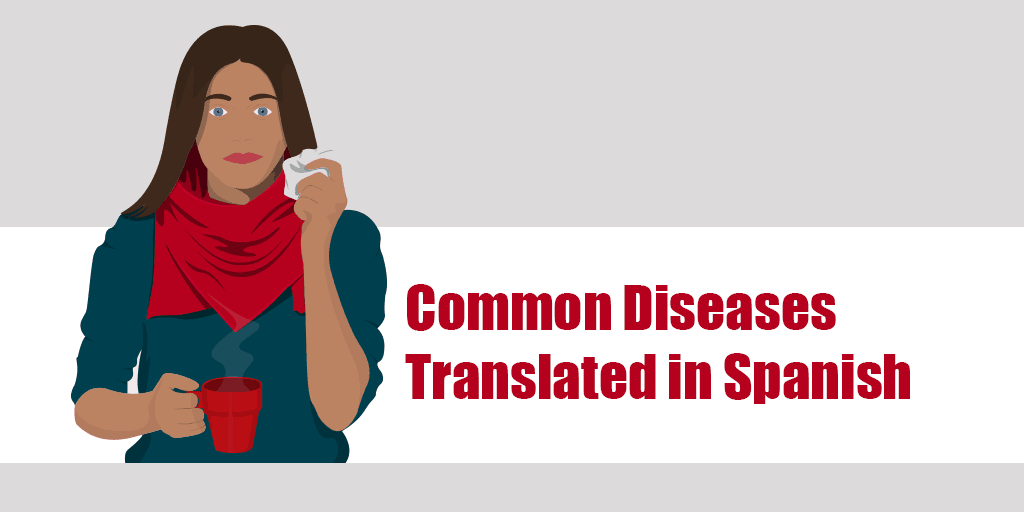 Are you a medical professional or medical student who is also learning Spanish? In this article, let’s review the different common diseases and learn what they are called in Spanish.

To make the vocabulary stick, don’t forget to the short quiz at the bottom of the article!

This first one is pretty much the same as what it’s called in English. But in Spanish, you say it with a more pronounced k sound. Say it with me: akh-´neh.

Anemia is also anemia in Spanish. Here’s how you say it: ah-´neh-mee-ah.

Just remove the th and you have asma, or how asthma is called in Spanish. It is pronounced as: ´ahs-mah.

If at this point you’re wondering if the names of illnesses actually vary between English and Spanish, the answer is YES. Just wait for it, you’ll see! Cancer in Spanish is pronounced ´kahn-sehr.

See, I told you, there’s a difference. Chickenpox in Spanish is varicela, pronounced as bah-ree-´she-lah.

Now back to the ones that are basically the same as in English. It’s pronounced almost the same way, too: ´koh-leh-rah.

Yep, diabetes is also diabetes in Spanish but you say it this way: dee-ah-´beh-tehs.

Diphtheria, a serious bacterial infection that affects the nose and throat is spelled as difteria and pronounced as deef-´teh-ree-ah in Spanish.

A viral infection that causes red rashes all over the body, German measles is also called rubella. In Spanish, it’s rubéola (roo-´beh-oh-lah).

Do you feel a painful burning feeling in your chest? It’s probably heartburn, or as the Spanish call it, acidez (ah-see-´dehs).

Be careful with the food you eat, you could get high cholesterol! In Spanish, it’s called colesterol alto (koh-lehs-the-´rohl ´ahl-toh).

This one is pretty straightforward except you say it as ehp-ah-´tee-tees ah, beh, seh.

There are different ways to say kidney stones in Spanish. You can say cálculos en los riñones (´kahl-koo-lohs ehn lohs ree-´nyoh-nehs) or piedra en el riñon. Either way is OK.

To say leukemia in Spanish, you simply switch the k with a c and you’re good. Come on, practice it with me: leh-oo-´seh-mee-ah.

Got rashes together with your runny nose, cough, red eyes, and sore throat? Must be measles! Or as the Spanish say, sarampión (sah-rahm-pee-´ohn).

Meningitis is also meningitis in Spanish, except you pronounce it meh-neen-´hee-tees.

This highly contagious (and quite awful!) disease is referred to in Spanish as paperas (pah-´peh-rahs).

Pneumonia is a common infection of the lungs which the Spanish call pulmonía (pool-moh-´nee-ah).

How do you say polio in Spanish? You say polio, too! Say it now: ´poh-lee-oh.

Another easy one. You can pronounce it as fee-´eh-breh reh-oo-´mah-tee-kah.

Smallpox, a disease that has been eradicated with vaccination programs, is also called variola. In Spanish, it is viruela (bee-roo-´eh-lah).

Just a slight difference in spellings here and there. And it’s pronounced the same way, too (´te-tah-nohs) !

This painful infection caused by virus or bacteria is called amigdalitis in Spanish. It’s pronounced as ah-meeg-da-´lee-tees.

This disease caused by drinking or eating infected food or water is referred to in Spanish as tifoidea  (tee-foh-ee-´deh-ah).

The painful sores in the stomach lining are called  úlceras (´ool-se-rahs) in Spanish.

1. What is scarlet fever in Spanish?

3. How do you call rheumatic fever in Spanish?

4. True or false: Heartburn is call acido in Spanish

5. What is sarampión in English?

You have just gone through 35 common diseases translated in Spanish. Do you need more information about Spanish medical terms? Our e-book Spanish for Medical Professionals is what you need. Even with zero prior background in Spanish, you can interact with Spanish-speaking patients immediately, with the help of this complete Medical Spanish e-book. Check it out below!