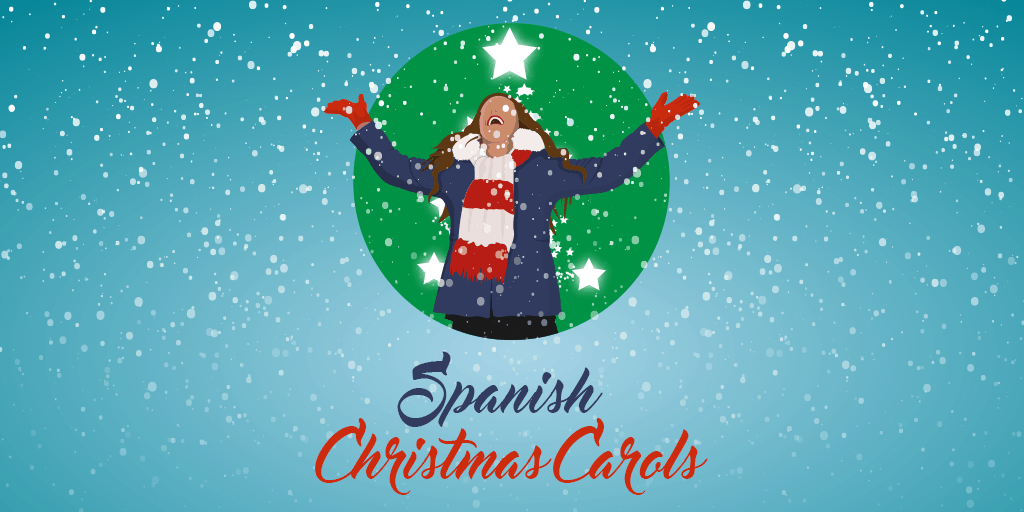 You’ll know that Christmas is approaching when traditional Christmas melodies waft from inside homes and shops, filling the air with magic. In Spain, carolers sing familiar villancicos, adding to the merriment. If you’re learning Spanish, now is the perfect time to learn popular Spanish Christmas carols right in time for the holidays.

This article will help you with that!

First, let’s start off with a song you probably already know. Known to the English-speaking part of the world as “White Christmas”, the Spanish version was interpreted by the Spanish singer Lucía Gil and with the collaboration of Ismael García.

The lovely tune talks about the beauty of a white Christmas and how the kids enjoy Christmas as it approaches.

This song is one of the most popular villancicos. The title means, A Fish in the River, and unlike other Christmas carols, this one is centered on the Virgin Mary as she washes newborn clothes in the river.

The song describes Mary’s reflection in the river and then follows on about the birth of the baby Jesus. A story of Jesus told in a humble tone, it oozes with tranquility and harmony--no bells and whistles or strong drum beats--just a simple peaceful Christmas song.

In each stanza of Campanas de Belén, the song tells us a key moment of Jesus’ birth. It starts with the announcement of the birth of Jesus which uses the metaphor of the sound of bells to express joy. It is followed by the celebration of the birth and how the shepherds go to Bethlehem with their “curd cheese, butter, and wine”.

This Peruvian Christmas carol urges listeners to “sing, eat, drink” to celebrate Christmas. Christmas is a season to be filled with joy so as the song goes, “canta, rie, bebe!” to your heart’s content!

Based on the tradition of how the Three Kings brought gifts on January sixth, this villancico is used to explain and remind the children what present each king brought to the manger when they came to Bethlehem to see the child.

Created by Jeremías Quintero who is said to have composed about 3 thousand Christmas carols, the song has a soft and cheerful melody and easy lyrics.

Noche de Paz is the Spanish version of the Christmas song known all over the world. I’m talking about “Silent Night”!

This song was originally composed in German by the Austrian schoolmaster and organist Franz Xaver Gruber and written by Austrian priest Joseph Mohr.

This Christmas carol is very easy for children to memorize, no wonder it’s a favorite among kids! When the Christmas season arrives, they usually sing this in schools and the little ones repeat: "rin, rin".

The title translates to “Towards Bethlehem goes a donkey, jingle jingle” and talks about--you guessed it--a donkey on his way to Bethlehem.

Very popular in Latin America, this Venezuelan Christmas carol was created by Chilean harpist and composer Hugo Cid for the 1972 Christmas season.

Yet another Spanish Christmas song about a little donkey! "Arre borriquito" means “Come on, little donkey”. This playful and humorous yet somewhat mischievous song with a catchy rhyme is usually one of the favorite songs of little kids.

There you go with ten Spanish Christmas carols. Time to practice them now! Which one is your favorite? And which songs did we miss? Let us know in the comments section!

For more related articles, check out:

Want more articles like these? Subscribe now to the weekly newsletter and you’ll get a FREE Spanish Learning Package that includes vocabulary lists in PDF, MP3s, and a free e-book!

Listen to this Free Playlist of Awesome Spanish Christmas Songs

A Playlist of Best Spanish Songs: Listen for Free