When you think of Spain, you might think of siestas, fiestas, and maybe the odd bit of flamenco. But some of Spain’s traditions might surprise you. From the dangerous to the dirty to the downright odd, here are some of Spain’s wackiest festivals and traditions. 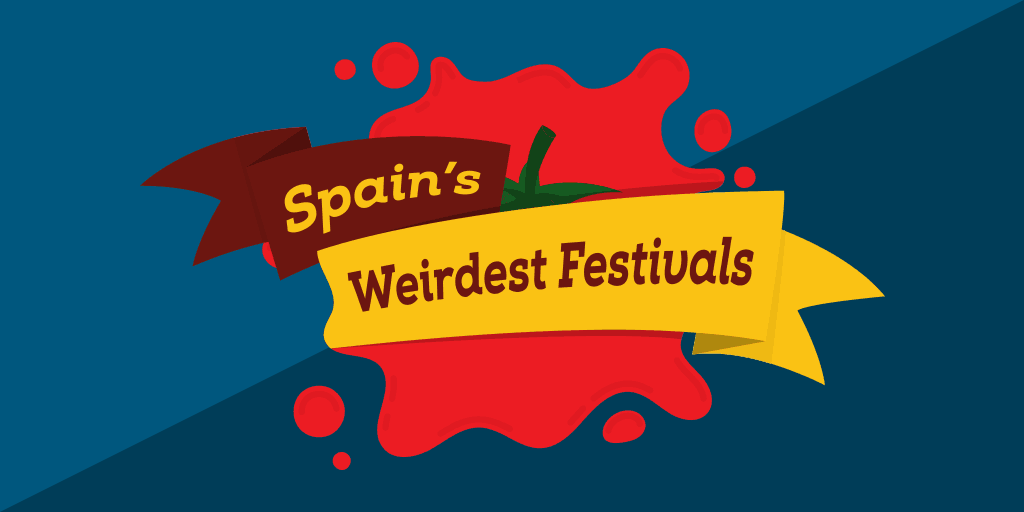 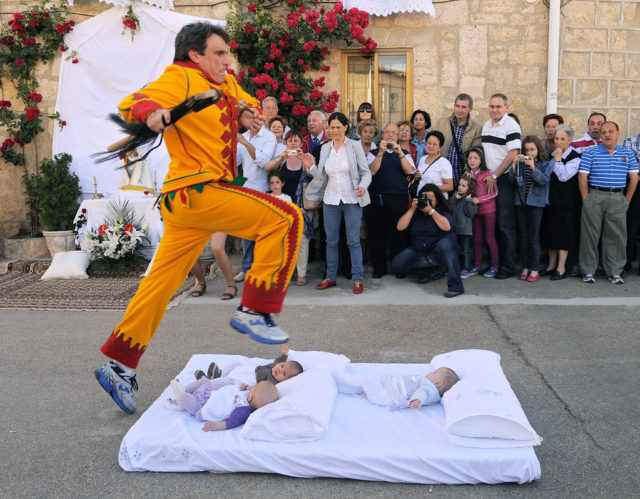 What: Parents lay their babies on mattresses in the street, then watch as a man dressed as the devil literally jumps over them.

Just before this happens, the man runs through the street, whipping members of the crowd as they hurl insults at him, to protect themselves from bad luck. The babies are also blessed by a pastor.

Afterwards, the babies are sprinkled with flowers, and the day finishes with a big ol’ fiesta.

Why: Go with me on this—I can explain! Dating back to the early 1600s, the festival celebrates the power of good over evil. The idea is that the Colacho (the devil) jumps over babies that were born in the previous 12 months in order to cleanse them of original sin; he absorbs the sin himself and wards off bad luck and bad spirits.

When: The Sunday after the Feast of Corpus Christi 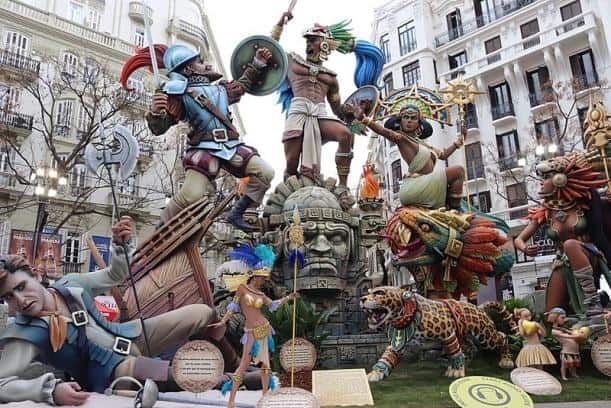 What: Throughout March, preparations are made for Las Fallas. From the start of the month, the Plaza del Ayuntamiento hosts a daily firecracker show, and the streets are filled with people letting off their own.

By 16th March, the fallas—collections of large, often satirical, monuments made of materials like cardboard, papier-mâché, wax, and wood—are displayed throughout the city. After prize-givings, flower offerings, and nightly firework displays, the effigies are burned in La Cremà (Valencian for ‘The Burning’).

Why: This tradition originated as a way to celebrate San José, patron saint of carpenters, every 19th March. One theory is that in the Middle Ages, carpenters used to use planks of wood to support their candles, as they worked for many hours in the dark. By springtime, this was no longer necessary, so they burned the planks, and started putting rags on them to make them look like people and figures.

Today, an incredible amount of effort goes into planning the satirical messages of the fallas, and physically making them. 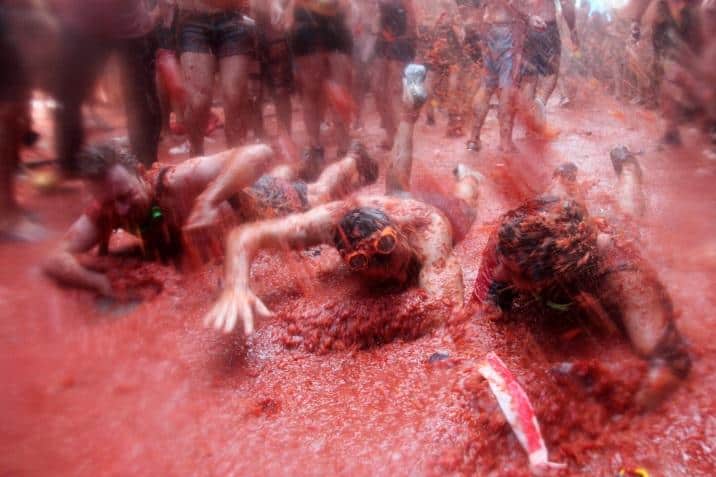 What: A massive food fight! Tens of thousands of people gather in Buñol once a year to throw tomatoes at each other and have fun in the street. These days, the food fight has become an official event, which is now so popular that you have to buy a ticket to participate!

Why: The reported history of La Tomatina is quite something, so strap in. It all started in 1945 at the parade of Gigantes y Cabezudos (another Spanish festival).

Some kids were trying to get a place in the procession, when they accidentally knocked someone over. This person got angry and started hitting everything in sight. There was a vegetable stand nearby, and the crowd joined in with the rage, throwing tomatoes at each other.

The following year, the kids started a fight deliberately, having brought their own tomatoes! La Tomatina was banned a couple of times in the 1950s, but the local people weren’t down with that. They protested by carrying a giant tomato through the town in a coffin, with funeral marches playing … and the event got reinstated.

When: The last Wednesday in August 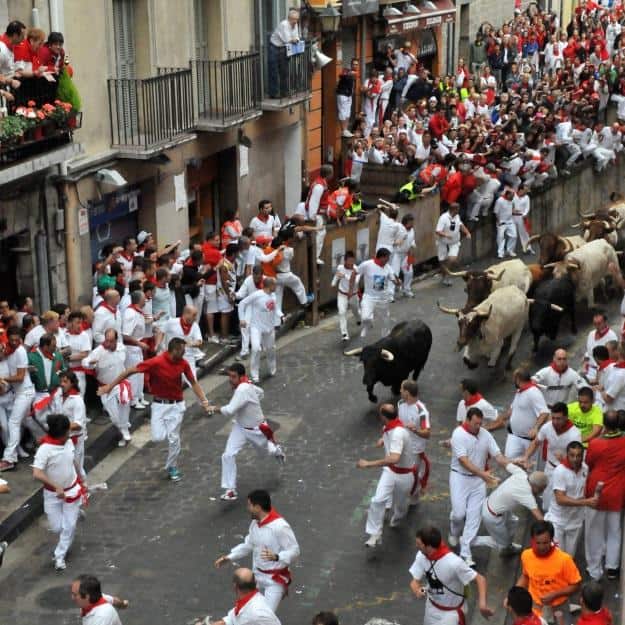 What: The celebration kicks off with the chupinazo, the lighting of a firework in front of an enormous cheering crowd. The week is filled with different celebrations, but the most well-known part is the Encierro, the running of the bulls.

Despite calls from animal rights activists, this controversial tradition continues to take place each year. At 8 o’clock in the morning, six bulls have to get from the bullpen to the Plaza de Toros (bull ring) for later fighting, so they’re sent running through the local streets, hot on the heels of the participants.

Running in front of charging bulls comes with its dangers, and it’s not unusual for people to get injured during this festival.

Why: These fiestas date back to the 12th century, and are held in commemoration of Saint Fermín, patron saint of Navarre (who may or may not actually exist!).

What: Another messy one! One man plays the role of the Cascamorras (see below) dressed as a harlequin, carrying a large flag with him. He tries to run through the town to retrieve the statue of the Virgen de la Piedad, and the townspeople try and cover him in black paint and oil.

When he returns to his own town without the statue, the disappointed locals give him a second coat of paint!

Why: The most widely-accepted version of the story goes that hundreds of years ago, there was a dispute between Baza and Guadix, two neighboring towns.

A guy from Guadix (the ‘Cascamorras’) found the statue Virgen de la Piedad (‘Our Lady of Mercy’) in Baza, and tried to take it back to Guadix. The courts ruled that the statue should stay in Baza but the Guadix people could have it one day a year. The people of Baza weren’t happy with this arrangement, which led to the tradition that the Cascamorras can only take the statue if he reaches it without getting covered in paint on the way!

Where: Baza and Guadix, Granada

What: Festival of near-death experiences. Yes, you read that correctly. People who have survived near-death experiences in the past year lie in coffins and are carried around by their families. After this somewhat morbid day, there’s a big party with plenty of music, dancing, food, and fireworks!

Why: This event is held in honor of Saint Martha, who’s said to be the patron saint of resurrection, for sparing the lives of loved ones who had come so close to death. Prayers made to Santa Marta include: “Virgin Saint Martha, star of the North, we bring you those who saw death.”

Where: Las Nieves (As Neves in Galician), Galicia 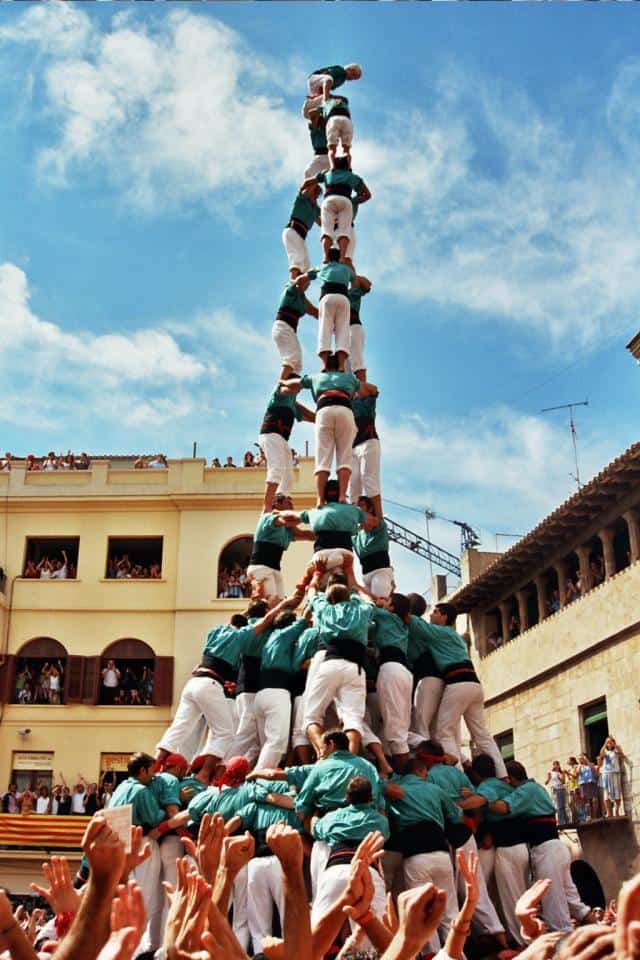 What: A UNESCO-recognized competition based on building human towers! Teams of castellers (the people who make up the towers) gather to compete in this remarkable if slightly unnerving competition.

It’s an intricate operation, and there are loads of rules that the teams have to abide by. Sometimes the towers have as many as 10 levels … and the craziest part? Because they’re light and agile, little kids are usually picked to clamber up and be the top level of the towers! It looks pretty awesome, but after watching this video, I think I’ll stick to the humble piggy-back.

Why: The tradition is thought to have started as part of a ‘Valencian Dance’ in Valls—near Tarragona—in the 18th century. It also has links to the Muixeranga, a similar Valencian artform. Over the years, the exercise has become less about dancing, and more about acrobatic skill.

When: The first weekend in October every other year

So, there you have it, our pick of weird Spanish festivals! The tourism industry tends to focus on the sun, sea, and sand in Spain … it’s great to look beyond that and learn about the fascinating and unique traditions that the country has to offer!

Travelling to a Spanish-speaking destination soon? Grab a copy of this Spanish Phrasebook to help you travel with confidence!