10 Best Spanish Novels to Improve your Spanish -- for All Levels

10 Best Spanish Novels to Improve your Spanish — for All Levels 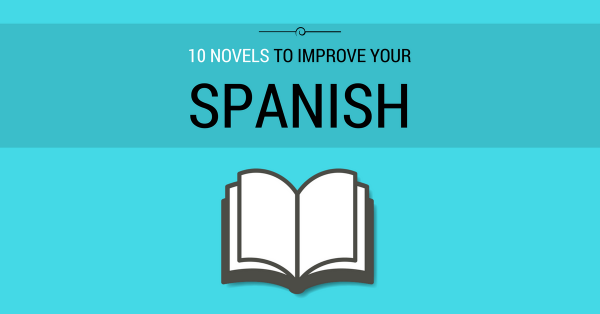 One of the best ways to learn a foreign language is through “authentic materials” or, simply put, things that were originally produced in the language.

Reading books written in Spanish is not only a great way to improve your language skills, but also helps to teach you a lot about the culture that created it!
Read on to find ten Spanish-language books and stories to read at any level.

Disclosure: When readers choose to buy our independently chosen editorial picks, we earn affiliate commissions that support our work. 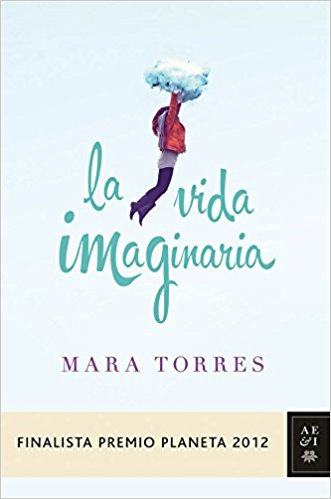 Finalist for the coveted Premio Planeta in 2012, this book follows the life of Nata, who is trying to pick up the pieces after her long-time boyfriend leaves her. The book follows Nata as she relives different periods of her life while simultaneously trying to remain in the “real world.”

While the storyline of this book doesn’t follow the traditional beginning, middle, and end plot set-up, the vocabulary isn’t overly complicated. There are some colloquial expressions and slang throughout, but still, it’s not a very difficult read.

Level: Easy-Intermediate
Get it on Amazon.

2. La casa de los espíritus (The House of the Spirits) by Isabel Allende

Written by the world-famous Chilean author Isabel Allende, this book combines elements from the supernatural world with those of the everyday world we live in. The story follows a family through four generations, recounting the trials of the political movement in post-colonial Chile through the eyes of those living through them. Focusing on elements of love, family, death, and revolution, this story is sure to not only improve your Spanish but give you some insight into this very interesting and tumultuous part of Chilean history.

While this book contains some complicated plots and intense family conflicts the language is beautiful and descriptive. It’s a little more difficult, but if you stick with it, you (and your Spanish level) will definitely be thankful you did! 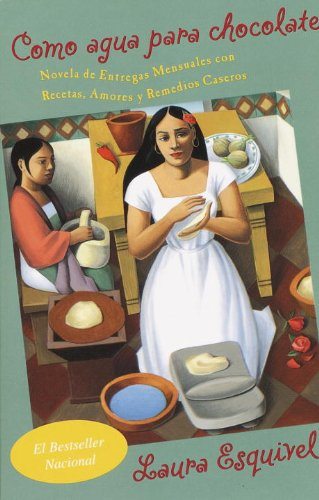 The book, written by Mexican author Laura Esquivel, is a wonderful read for anyone interested in culture and cooking. That’s right–cooking! The beginning of each of the twelve chapters, named after each month of the year, starts with a recipe.

The story follows a young, Mexican girl Tita who longs to marry Pedro, the love of her life. Unfortunately, given her mother’s strict adherence to family tradition that the youngest daughter stays with her and take care of her until her death, she is unable to leave home and pursue a life of her own.

The recipes that start each chapter work into the story seamlessly, and give an added cultural touch to an already rich story. Follow Tita as she prepares each dish, simultaneously recounting an episode of her life as she struggles through her own coming of age experience.

Level: Intermediate
Get it now on Amazon

This book is one that not only tells a great and captivating story but also carries a lot of deep, potentially unanswerable questions about the human condition itself.

The story follows Juan José Saer’s young protagonist as he ventures off into the new world. He and his exploration team will come face-to-face with the natives of the new world and simultaneously a whirlwind of philosophical questions will present themselves.

Not only will your Spanish improve, but your mind will expand. This story will take you on a crazy adventure into the unknown, while at the same time presenting you with some new perspectives and unique takes on life, death, order and chaos.

Level: Intermediate
Get it on Amazon 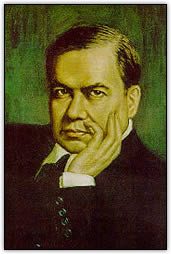 Short stories are a great way to take on reading in small chunks. You will still be immersed in the world of fiction while not getting too wrapped up in complex story lines and drawn-out plots.

The short stories by Nicaraguan Modernist author and poet Ruben Dario are written, of course, in the Modernist style. Dario has been credited as being one of the fathers of this 19th Century literary movement that focuses on the importance of nature and the exotic.

For links to some of his stories, as well as other short stories written by authors from the same generation check out the website below:
http://www.rinconcastellano.com/biblio/sigloxx_98/index.html

This novel by Colombian author Gabriel García Márquez was published in 1985 and has also been adapted into a film.

This is a story of love–sort of. While there is plenty of characters that go into the formation of the story, there are two that certainly and clearly stand out. The love between Florentino and Fermina is forbidden from the very beginning. After years (decades, really) and a lot of other experiences apart, the two are finally able to come together again.

While some may view this story as one of true love standing the test of time, others have pointed to García Márquez’s true meaning being to draw a relationship between love as an illness (i.e. love sickness). This is done through the parallel of the disease that was plaguing the time in which it was set (late 1800s to early 1900s) Cholera.

Get in now on Amazon 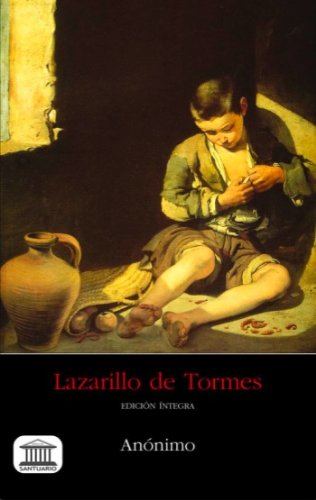 One of the great classics of Spanish literature, this book was written by an unknown author in the 16th century. Written in the form of a letter, the story outlines the life of the main character Lazarillo as he navigates his way through the trials of his time.

Considered the precursor to the “novela picaresca” in which the main character is the very definition of an “anti-hero” this story serves as a social commentary. It aims, in a somewhat comical way at times, to point out the hypocrisy of the religious figures of the day (especially surrounding the idea of the Inquisition, which was in full swing).

Considering that it was written centuries ago, and with a sarcastic, somewhat satirical air, this book is recommended for the advanced learner.

8. Nada (Nothing) by Carmen Laforet 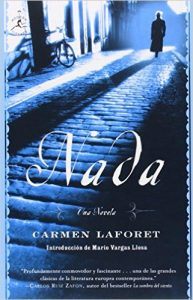 Winner of several awards, this novel is another Spanish classic although it was written in the last century. Published in 1944, this story takes a critical look at post-Civil War Spain and the poverty and hardships that formed a large part of everyday life.

The story follows young Andrea as she moves to Barcelona to live with her grandmother where she intends to study and start a fresh, new life after the war. The condition of the home, where she had so many lovely childhood memories, leaves her feeling completely disillusioned, and serves as the perfect backdrop for her time in the city. A coming-of-age story, this book follows the main character through some of the most trying times of her life.

This book will not only help improve your Spanish, but it will also give you insight into one of the most tumultuous times in Spain’s history.

Another famous book from the world-renowned Colombian author Gabriel García Márquez, One Hundred Years of Solitude was published in 1967 and follows one family through various generations. The story takes place in the fictional town of Macondo, which is a metaphor for Colombia, and contains both realistic and fantastical elements.

Macondo was discovered and founded by the Buendía family. It’s a magical place with very special properties. Although the beginning appears to be idyllic, the Buendía family quickly encounters numerous problems, most of them created by themselves, in fact.

The story is complex and carries with it a lot of clear and not-so-clear messages. The main theme of the story is the inescapable nature of Macondo (i.e. Colombia), and the fact that history seems to repeat itself constantly, and the inhabitants of the island are unable to pull themselves out of the repetitive cycle. 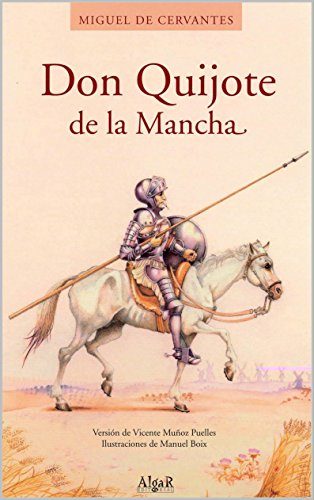 No list of Spanish literature would be complete without including what is probably one of the most famous novels of all time, Don Quijote de la Mancha by Miguel de Cervantes.

Written in two volumes, the first published in 1605 and the second in 1615, this story follows the intelligent and well-read, albeit extremely frustrating at times, Don Quijote and his not-too-bright but very lovable sidekick Sancho Panza. Initially meant to be a satire of the famous “knight-in-shining-armour novels”, this story clearly took on a life of its own.

It is a satirical, comedic, tragic, romantic, adventure novel that not only serves as a commentary of the time but also raises a lot of questions that address the human condition in general. The main character, Don Quijote, becomes lost in a fantasy world of knights and monsters, damsels in distress and castles on a hill. Embarking on a journey to become a “caballero andante” (knight) himself, Quijote encounters countless other characters who add to the story’s multi-layered feel.

Given the complex nature of the story itself, as well as the time period in which it was written, this story is recommended for more advanced learners. (Although, easier adaptations have been written, and are also worth a read.)

There are countless books, short stories, novels, and poetry that have come out of the Spanish-speaking world. This list has only begun to scratch the surface of a vast world of absolutely amazing literature.

What about you? Have you read any of the books on the list? What did you think of them? Are there any others you would recommend that we didn’t mention? Let us know in the comments.

For stories with audio, you might also want to check this out! 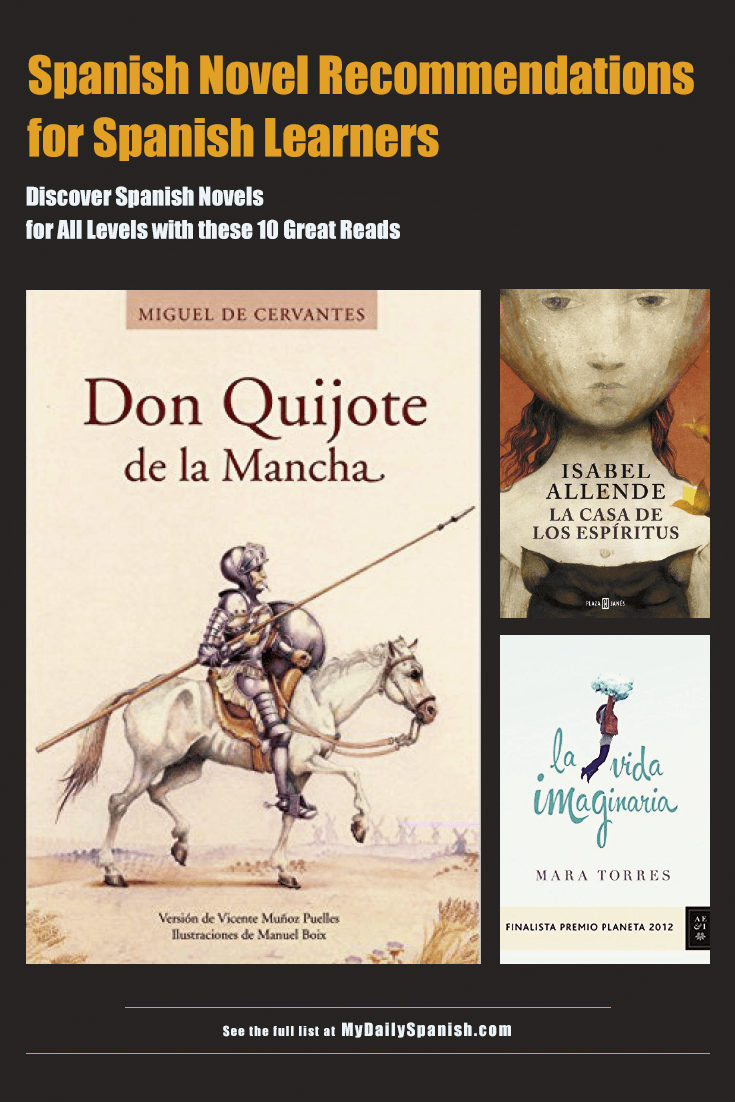 A Quick Guide to Numbers in Spanish

A Quick Guide to Spanish Articles

Previous Post Spanish Idioms Quiz: How Many of These Do You Know? Next Post 10 Fun Ways to Learn Spanish Throughout the Day