A Quick Guide to Spanish Idiomatic Expressions - My Daily Spanish 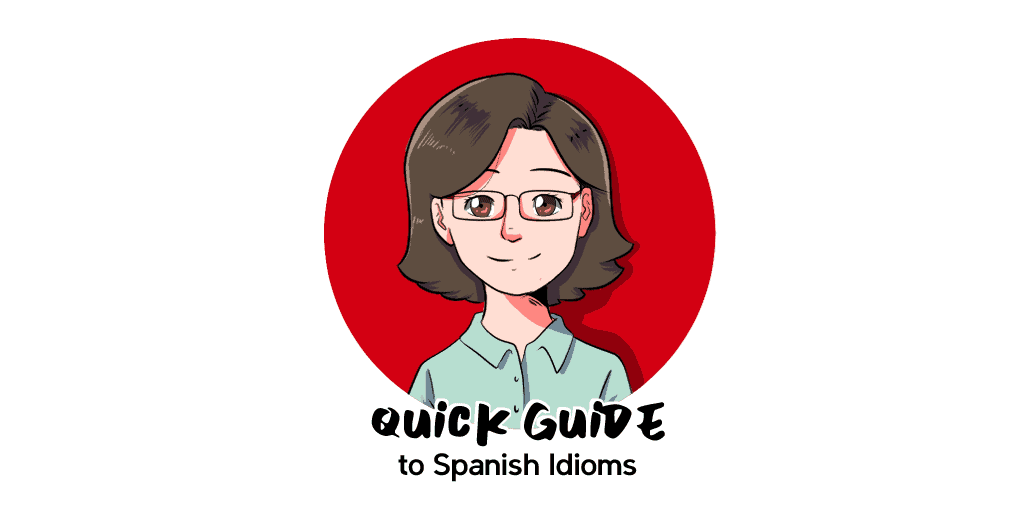 Fluent Spanish speakers understand not only words and phrases, but are able to decipher the many Spanish colloquial expressions and idioms. Just as with English, many of the most common Spanish idioms vary widely from their literal translations.

We'll cover some of the most famous Spanish idioms, so you'll sound like a native speaker in no time!

Spanish idioms, or modismos, are informal phrases used to express a variety of thoughts and emotions. Sometimes, expression the exact words doesn't do the situation justice to truly express what you're feeling.

Spanish varies across the world – you'll find different modismos in every country. We'll touch on the most common that you'll find in Spain or understood by Spanish-speakers in general.

The most important thing about using these Spanish idioms is the context. They're best used in informal situations when talking casually with friends. Hearing them by themselves might be confusing at first, but with a bit of practice, you'll use them as part of your everyday language!

The good news for native English-speakers is that you'll recognize a few of the top Spanish idioms that have similar meanings across the languages. While the word choice might be a bit different, the overall meaning holds, and people use them in the same situations.

You can use pan comida in a variety of situations such as after taking an exam or winning a race. You'll often hear "el examen es pan comida," or "the exam is a piece of cake."

Another popular phrase with a similar expression in English is "tomar el pelo," which translates to "take someone's hair." People use the expression while messing with someone jokingly. The phrase is familiar in English as "pulling someone's leg."

You'll use the phrase in the same way in English as in "me estes tomando el pelo," or you're pulling my leg.

If you're planning to go shopping, a Spanish expression to keep handy is "costar un mojo de la cara," which means that something is very expensive. The literal translation is "to cost an eye out of the head," or, in related English, "to cost an arm and a leg."

Another Spanish expression related to body parts is "aprobar por los pelos," or to pass by the hair. The phrase is exactly the same as English when you achieve something with the bare minimum score, for example.

As you begin to make more Spanish-speaking friends, you'll often start to hear a lot of gossip and sharing secrets while hanging out or chatting on the phone. If you're anxious to listen to the latest updates, simply say, "Suelta la sopa!" or "spill the soup!" The phrase is similar to the English idiom "spill be beans."

When you finally hear what you've been expecting, it's common to say the phrase "ya salió el peine." The Spanish expression translates to "the comb comes out," or in slang terms, "the truth comes out."

As important as animals are to our lives, they also show up a lot of frequently used Spanish idioms. There are lots of modismos that seem to be talking about animals but actually relate to things much different.

The Spanish word for cat, or "gato," is commonly used in Spanish idioms. Some of the most popular include:

In English, the later might be a bit more relatable, with most people relating to the phrase, "something smells fishy."

You use either of the phrases when you have a strange feeling about something.

The second phrase, "buscarle a quinta pata al gato" means that someone is trying to overcomplicate things. The literal translation is to look for the fifth foot on the cat," which is an impossible task since it doesn't exist.

Another common Spanish expression related to animals is "pensando en la inmortalidad del cangrejo." The phrase translates as "thinking about the immortality of a crab." The idiomatic translation is to zone out.

The perfect setting where you might hear the phrase used is in a classroom or meeting. People say it when someone has clearly zoned out.

A related phrase common throughout Spain is to say "estar empanada," or "to be breaded." When used in the correct context, it also means to be zoned out.

Not all Spanish idioms relate to English. You'll definitely need to hear the phrases used in the correct context because even the literal translations relate nothing to what the person is actually trying to say.

One example is "caer gordo." Many people use the phrase for expression that something (or someone) is annoying. The literal translation of the phrase is "to fall fat."

If someone annoys you, you can say, "me caes gordo."

Another example is "tirar la casa por la ventana." Many girls will be excited to hear the phrase when talking about their wedding or quinceañera. The phrase literally translates as "to throw the house out of the window" - in the right context means to go all out, such as with spending money.

Let's be honest, we don't enjoy all of our conversations. For some conversations, we may tune the other person out or disregard everything they just said. In these situations, you can say, "le di el avión." The phrase means to ignore or disregard someone, but in a literal sense, it means "to give someone the airplane."

See below for a complete list and a few bonus Spanish idioms you might here and their meanings:

Let us know in the comments which of these Spanish idioms you’ve heard before.

About the Author Bryan Shelmon

Bryan Shelmon is a travel writer, living the digital nomad lifestyle as of the past few years to immerse himself into the travel industry. Bryan has traveled to regions including the Americas, the Caribbean, Europe, and Southeast Asia. While traveling, he enjoys attending local cultural events and working on creative projects. Bryan continues to grow as a writer, achieving a #1 Best Selling travel culture guide on Amazon and exploring new regions of the world.