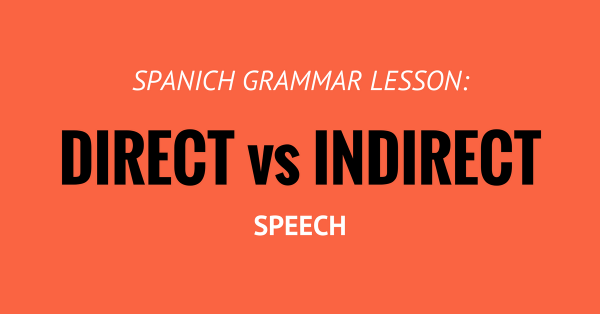 The difference between direct and indirect speech (also called reported speech) is pretty easy to understand.

But it’s not very easy to apply when speaking in a foreign language. It is a very important part of communicating, however, and plays an major role in most conversations.

Read on for a quick introduction and guide to direct vs indirect speech in Spanish.

So, what’s the difference?

That’s a very good question! Before we get too far ahead of ourselves with all the little technicalities, let’s make sure that we understand what we’re dealing with here.

In order to do this, take the following conversation:

Pedro: Where are you going?

Jose: To the store.

Now, let’s say Pedro later goes on to have a conversation with someone else, about the above mentioned interaction. There are some options for how they could go about doing this. Let’s just say it looked something like this:

The above recounting of a previous event or exchange with another person is what we’re going to look at. You have two options when doing this.

The first, is by using quotation marks. This is direct speech. This means that the words are being repeated exactly like they were said.

The second way of recounting a conversation is through indirect speech. In the example above, this is done through changing the verb tense, although that isn’t always required (we will look at that more later).

Basically, there are 3 important rules to keep in mind when using indirect (reported) speech. They are:

There are still a few things we need to talk about before getting into everyone’s favorite part about grammar–the technicalities.

In order to identify that something is being “reported” or to communicate that you are repeating something that someone said previously, you’ll use a reporting verb. We have them in English as well.
The most common are:

*Most common of the most common

You’ll notice that (almost) all of the examples above in the chart using reported speech include the little word “que.” This is not a coincidence.

When speaking in reported speech you will always use the “que” (meaning “that”). Even if in English we can and would omit the “that” you still need it in Spanish.”

“She said that she was tired.”- Here, in English the “that” is optional. This is not the case in Spanish.

But wait… the questions…

If you’re reporting a question, you have a few options available as they don’t always need the “que”.

Yes and No Questions.

If the answer to the question being reported can be “yes” or “no” you don’t need the “que.” In these situation we would use the “si” like in English (if).

“He asked me if I could go to the store.”- Me preguntó si iba a la tienda.

Let’s get a little more technical.

We’ll try to ease you into all of this grammatical stuff. It seems like a lot to remember. But, a lot of it is very common in English as well, so try to not to get too overwhelmed!

Again, let’s start with an example:

Here, obviously a few things need to change if you want to report this statement. For one, he’s not your brother and for another you’re not the one that needs to speak to him.

In this situation, the personal pronouns (you, I) need to change, as well as the possessive (my). Here’s how this statement would sound when repeating it later on to someone else:

So far so good, right? It’s pretty basic stuff up to this point. Just like in English, we need to change the subject and the pronouns.

Obviously, more often than not, if you’re reporting something that happened it’s because the person you’re recounting the event to wasn’t there when it took place–i.e. it was in the past.

So, here’s how you would change around your time phrases so they line up with what you’re saying:

As you’ll notice above, all of the examples are written in the past. This is also something important to pay attention to, and probably one of the most important grammatical points of reported speech. So, let’s go ahead and dive right into that! 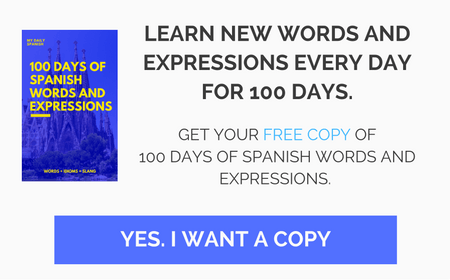 The tense the reporting verb is in (present, past, future) will have a big impact on the rest of the sentence.
Not only will you need to pay attention to the tense, but also to what is being said.

Depending on the context of the conversation being reported, you’ll need to use different ways of repeating it.

This is where things can start to get a little tricky. We do have similar rules in English as they do in Spanish, but in English they are a little more flexible, and followed less frequently.

Here are some good rules to keep in mind when using indirect speech in Spanish:

Let’s look at a quick scenario and see what we have:

Scenario: Let’s say you’re texting with someone, and your friend (who you’re with physically) wants to know what the person texting you is saying.

Person 2: He asked if we are free tonight. (reporting information)

2: He wants us to help him move. (reporting a request)

Here, we can see that in the first part, Person 2 is simply repeating the information. He asked a question, and this is what it is. The reporting verb “want to know” is in the present, so the second verb is in the present as well.

Note: This change to the subjunctive only happens with certain verbs: Decir, Pedir, Querer. An easy way to remember this is if they verb will be followed by “si” or “que.”

So, if you feel like all of that has settled into your mind and it’s not going to explode just yet, let’s keep chugging along!

As mentioned above, if the reporting verb is in present, it will only change (to present subjunctive) if the thing being reported is a command/ request.

When the reporting verb is in the past, however, the rest of the information being reported will need to change tense. Here’s how that is going to work:

With these, you will not change second verb tense. Yay!

Just one more thing… I promise!

One last thing to remember, like we saw with the present tense, if the verb in the past is a reporting verb, and what is being reported is a command or request, you will use the subjunctive–past subjunctive this time!

¡Madre Mía! That was a lot of information!

Let’s see if we can condense it down just a little bit.

Important rules to remember. If you are using reporting speech:

If you do need to change the verb tense, this is why and when:

If the reporting verb is in the past, these are the changes you’ll make:

Verbs that will not change the tense of the others verbs:

Things to keep in mind:

In reality, it’s not as complicated as it looks. It may take a little practice to get used to, but after a while, you’ll find that is relatively similar to what we do in English.

Do you have any shortcuts you use to remember the rules mentioned above? Is reported (indirect) speech something you struggle with? Let us know in the comments!