Por and Para: What’s the Difference?

Por and para both translate into English as ‘for,’ but they can’t be used interchangeably! In this article we’ll show you when to opt for por and when to pick para.

The way some people like to look at it is that por is used for looking back to the cause or origin of something, and para is used for forward-looking things (like purpose or destination). But this is a massive generalization, and we want you to understand the difference in more detail. 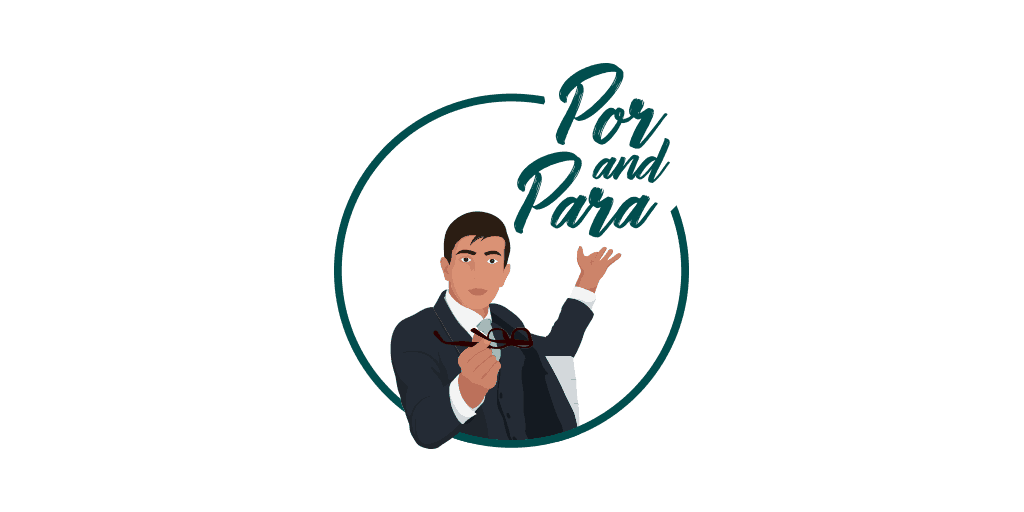 Quick Navigation
When to use para
Final goal/destination/purpose/object
Advantage or disadvantage
Deadline
Direction after motion verbs
Reaction/response
Para + infinitive = in order to
Estar para + infinitive = about to
When to use por
Cause
How something works
Manner of communication or travel
Behalf
For the sake of
In favor of
Yet to be done
Location
Exchange/price
Multiplied by
‘By’ in passive constructions
To take for…
To judge by/going by
In search of something
However…
Duration
Gracias
Time for a quiz!
Phew!

When to use para

Para is often used in the sense of looking forward towards a goal/deadline/effect. Let’s look at para first, as it has fewer complicated uses than por!

BONUS: Sometimes, in more colloquial speech, you’re likely to hear para shortened to pa. Listen out for it in Spanish movies and songs!

One of the main uses of para is to talk about the final goal or purpose of something.

When something is good/bad for someone/something.

We use para to express that something needs to be done by a certain time.

We can use para to say where we’re headed.

Use para to say that a certain reaction or feeling is being had by a specific person.

When we want to say ‘for’ in the sense of ‘considering’ or ‘given,’ we use para.

Para + infinitive = in order to

We can use para with an infinitive, to mean ‘in order to.’

Estar para + infinitive = about to

Estar para means to be about to do/on the verge of doing something.

When to use por

As we’ve mentioned, por is often used when talking about the root or cause of something, but not always. It’s used in various ways, as we’ve shown below. Some of the categories are very similar, and may overlap, but looking at a variety of situations will help you get the picture!

BONUS: After looking at these examples, the phrase ¿por qué? should now make sense, as it literally means ‘for what?’

The first use we’ll look at is cause. When something is the cause of something else, we can use por to mean ‘because of.’

This can include emotional states. Let’s say you’re feeling sad because you’ve just done an exam and you feel it hasn’t gone very well.

We use por to explain how something works or happens, i.e. it happens through/by means of.

Manner of communication or travel

We use por to describe the way in which something (e.g. a person or a piece of information) has traveled.

We use por when describing things done on someone’s behalf.

For the sake of

Por can be used to refer to doing something for the sake/good of something/someone.

But it can also be used to portray a pointless action:

Earlier we saw that estar para means ‘to be about to.’

If we use por instead of para, we get a completely different phrase. Estar por is used to literally say you’re for (as opposed to against) something.

Yet to be done

Another way we can use estar with por is to talk about something that needs to be done, or will be done. Just put an infinitive after the por!

Por can be used to say that you’re going through a location, or to describe the general area of that location.

Similarly, if an object moves through another object, use por.

In math, por is used when multiplying numbers. It translates in this case as ‘by.’

‘By’ in passive constructions

Por is often used in what we call ‘passive constructions’ when we want to describe something that was done by someone.’ Check out these examples:

To perceive someone or something in a certain way.

This is a situation when you want to make a judgement based on some other information.

In search of something

This one is a little counterintuitive, but we can use por when we are going to get something.

This one is a little complicated.  In some situations, para (in the case of the duration of something in the future), or maybe even no preposition at all, will be preferable. But here’s when you usually use por:

When you want to emphasize that something only lasted for a short period of time, use por.

When you want to say how long something lasted in general, Latin Americans may use por whereas Spaniards may use durante.

When giving thanks for something, we always use por not para.

Time for a quiz!

Pick the correct answer for each of the following phrases:

2. The boy was rejected by Ana.

3. You have to have written it by tomorrow.

4. Thank you for being my best friend.

In this article we’ve looked at the differences between por and para. There’s a lot to take in, so just try to practice a little every day. ¡Gracias por leer!