When you think of beautiful Spanish scenery, you might be inclined to imagine beaches, mountains, and other natural phenomena, meaning that man-made structures can often be overlooked.

With literally thousands of castles in Spain, it’s hard to pick just a few favorites, but we’ve given it our best shot! 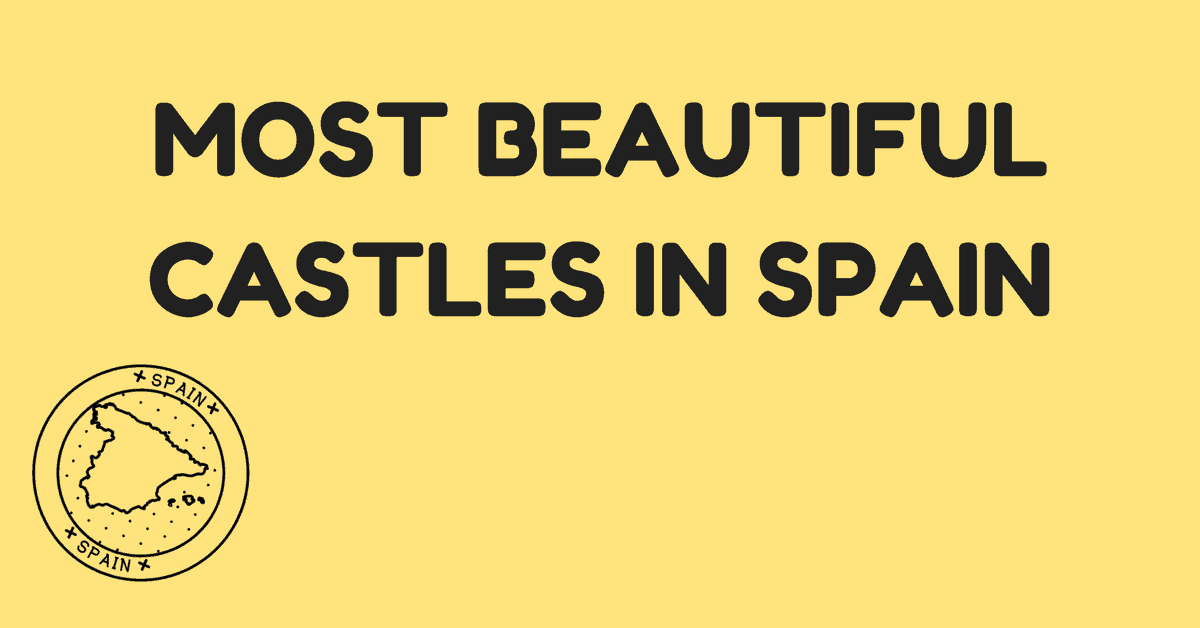 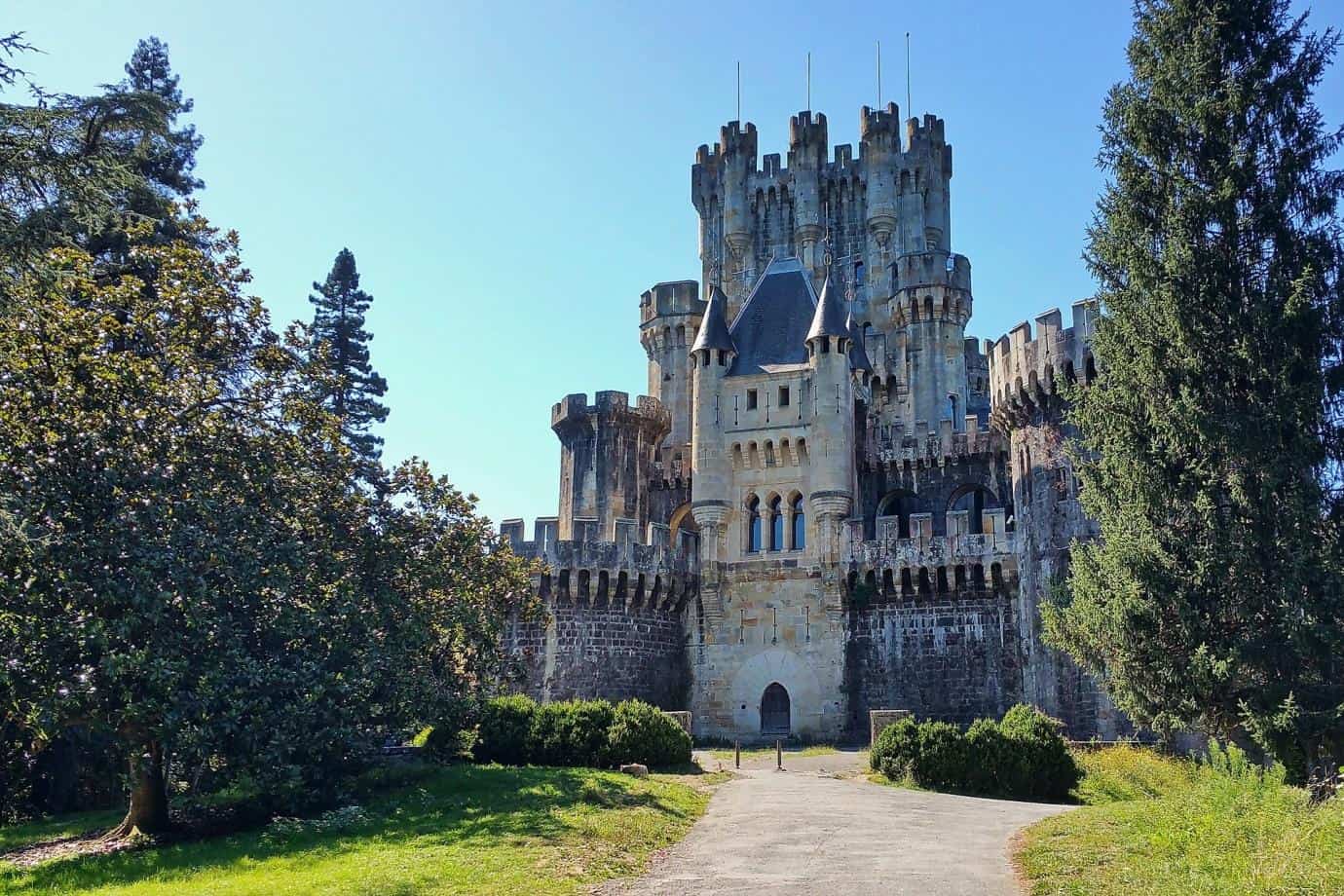 With its Bavarian-style turrets and surrounding trees, this one is pretty Disney, but it doesn’t have a very fairy-tale history. Instead, as the home of the mighty Butrón family originally, the castle was witness to some pretty brutal battles between two bands of nobility in the Bizkaia area.

One of Spain’s most famous castles, you might have come across The Alhambra in the film El Dorado, Paolo Coelho’s The Alchemist, or even while playing Assassin’s Creed!

Its name originating from the Arabic for The Red One, it has strong Moorish roots. Despite some reconstruction, it maintains the charm of the Islamic architecture of yesteryear. 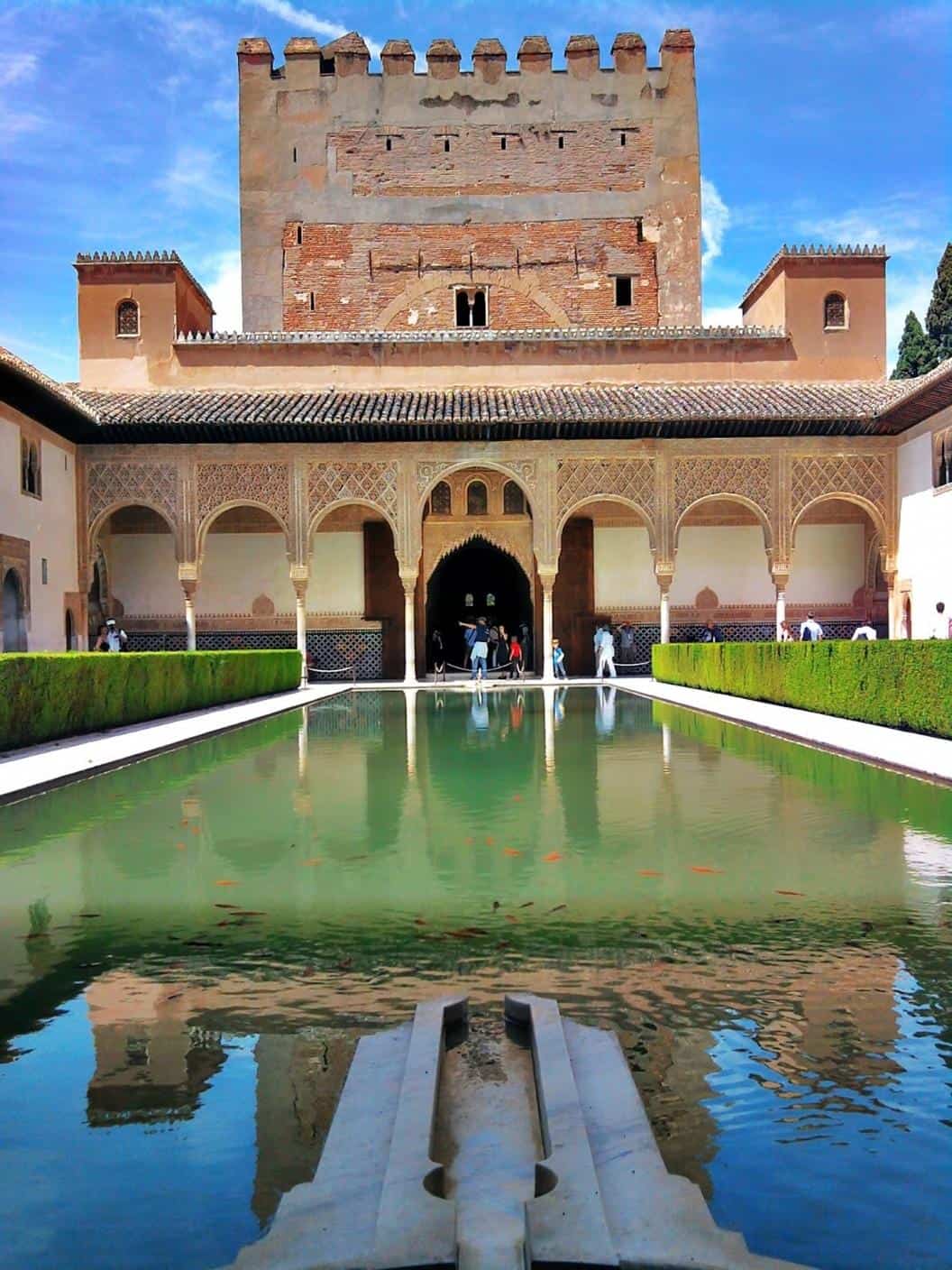 A UNESCO World Heritage Site, this “pearl set in emeralds,” as described by Moorish poets, is a stunner!

Who were the Moors?

Way back in the 8th century, Muslims, known in and around Spain as Moors, entered Christian Spain, and they lasted almost 800 years in Granada (they didn’t last that long in other parts of Spain). This 800-year period is known as the Reconquista (‘reconquest’), which saw Christian forces attempting to expel the Moors from the country.

In 1492, the same year that Spain’s monarchy funded Columbus’s trip to America, the Moors in Granada were defeated by the Christians, marking the end of Moorish rule in Spain. 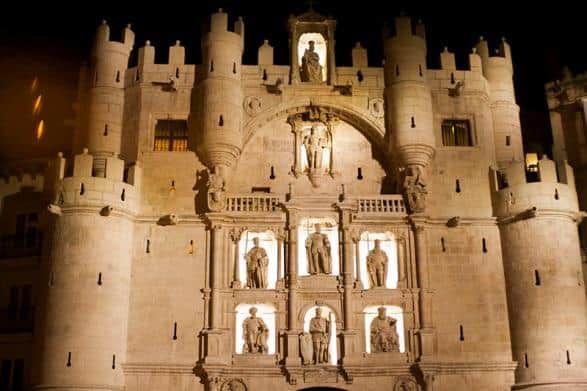 I don’t know about you, but the facade of this Burgos-based structure reminds me of an epic sandcastle!

The 6 figures you can see at the bottom are two Judges of Castile, two Counts, Emperor Carlos I, and el Cid. Above them is the guardian angel of Burgos, flanked by (smaller statues of) two beadles. Right at the top is the Virgin Mary (Virgen Santa María). 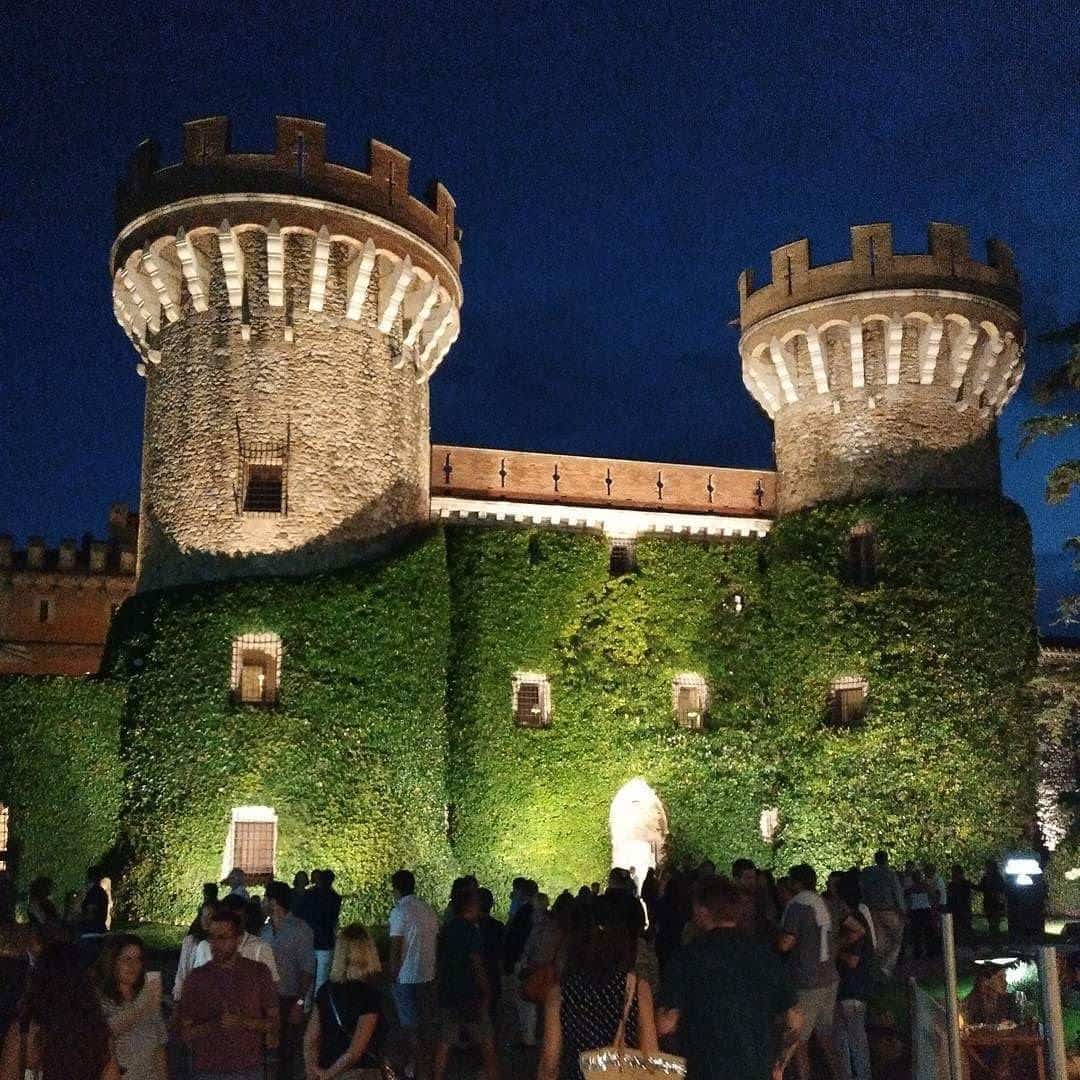 The heart of the county of Peralada, this castle has undergone various reformative works over the years, having been destroyed in battle in the 13th century. Today, part of the premises is the headquarters of a large winery!

It’s a stunner by night, with lights showing off a vibrant blanket of greenery covering much of the exterior.

Spain is made up of 17 autonomous communities, each with its own unique qualities. Some of the bigger of these regions even have their own languages! Catalonia, for example, uses Catalan in addition to the Spanish that we teach here at MDS (My Daily Spanish).

For years, there has been great debate over which language to use in schools and other public spheres, and a strong push from some sides for Catalan independence (you may have heard about this in the news recently!).

For many of the castles situated in Catalonia, the Catalan word castell is often used instead of castillo (e.g. this one would be Castell de Peralada)!

Check out which region might suit you with our quiz! 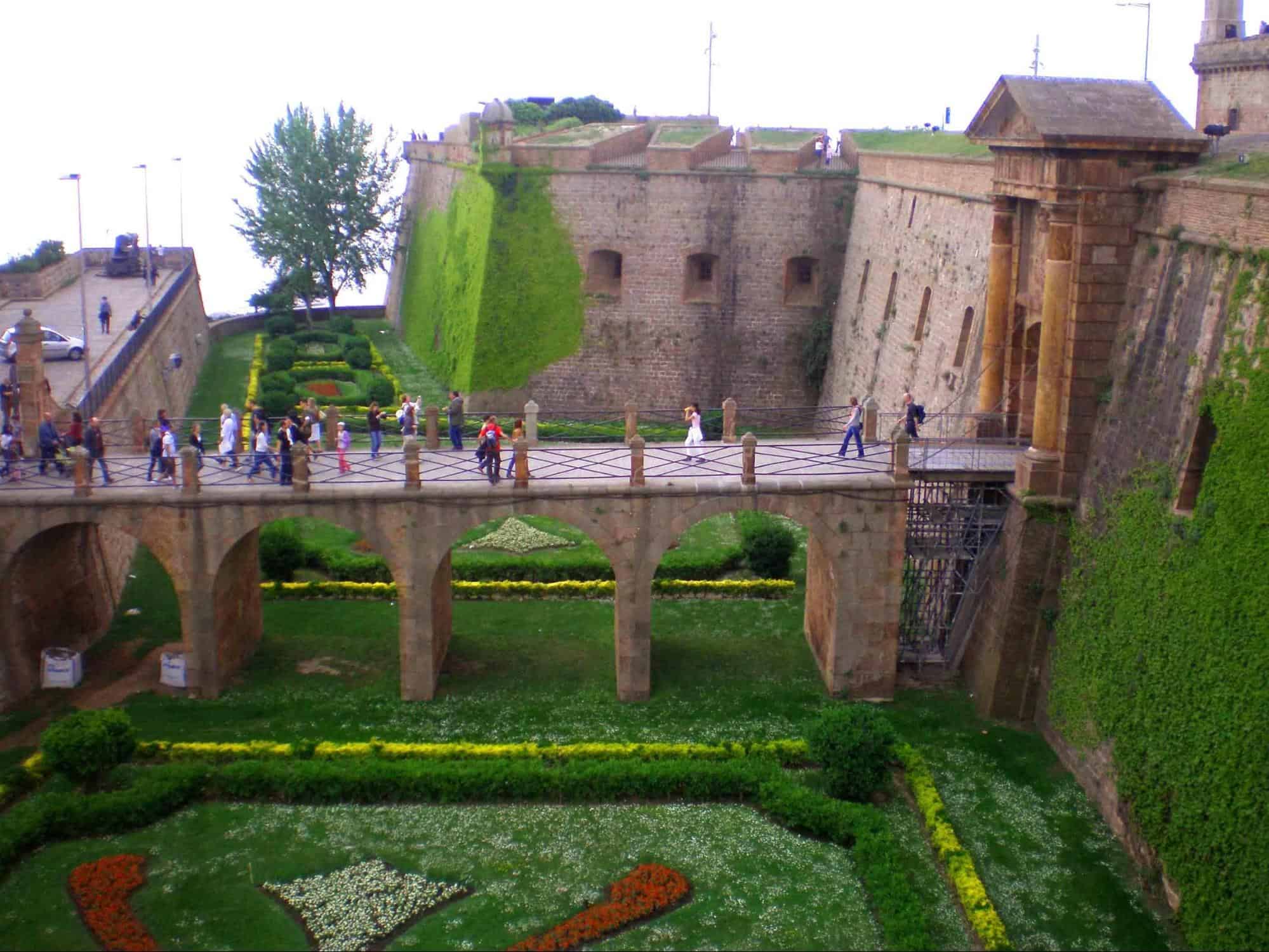 This castle has seen its fair share of history since it was built in the 1600s, having stood through the War of the Spanish Succession, the Battle of Montjuïc, and the Spanish Civil War of 1936—1939 (psst…this will give you a helping hand if you want to have a go at our Spanish history quiz!).

During the civil war, the castle was the site of the torturing and killing of political prisoners on both sides of the conflict.

Unlike castles that have been left in a more natural state, Montjuïc boasts vibrant, beautifully designed gardens. 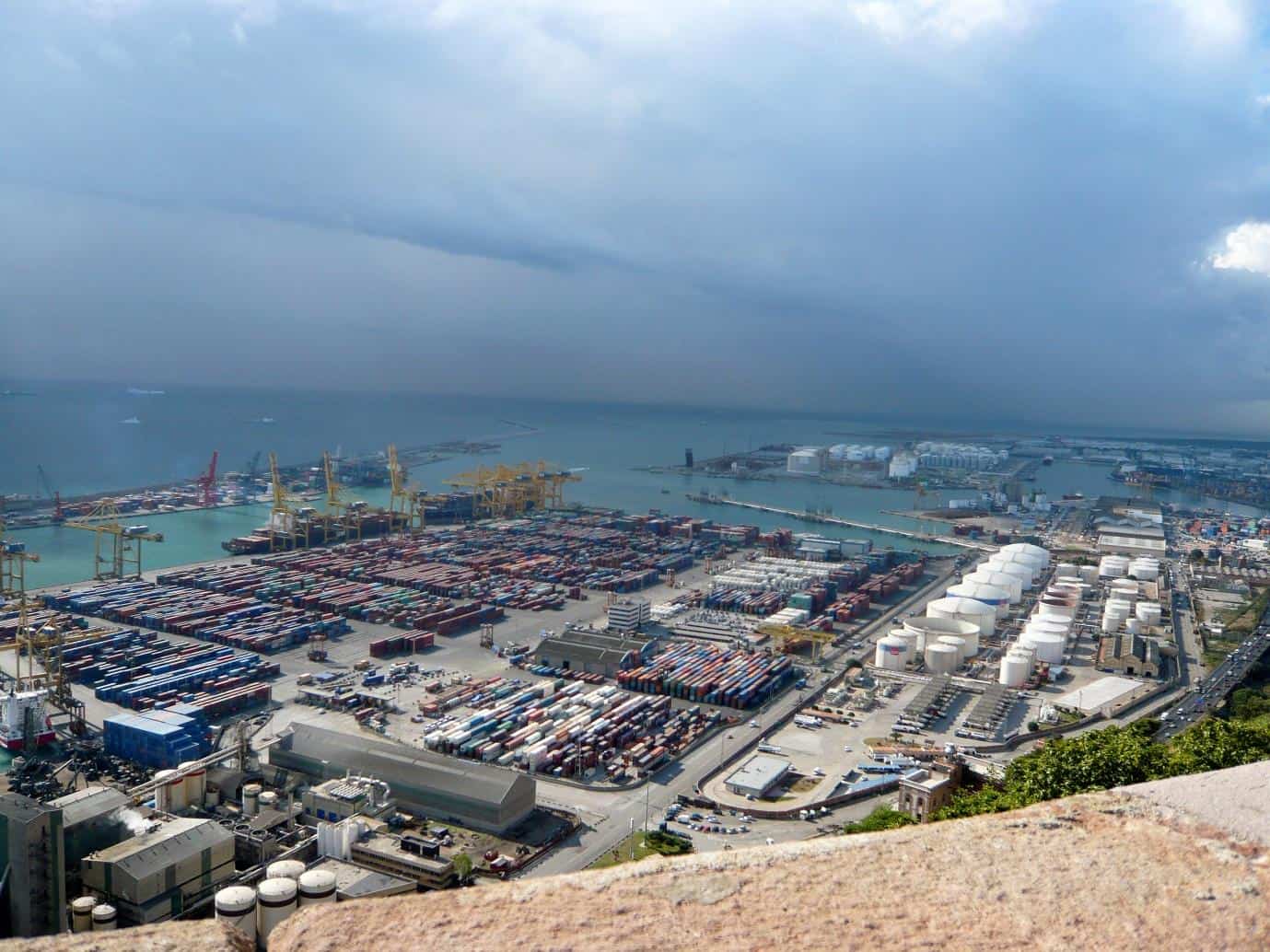 This castle is also close enough to the sea that you can see the port from it! 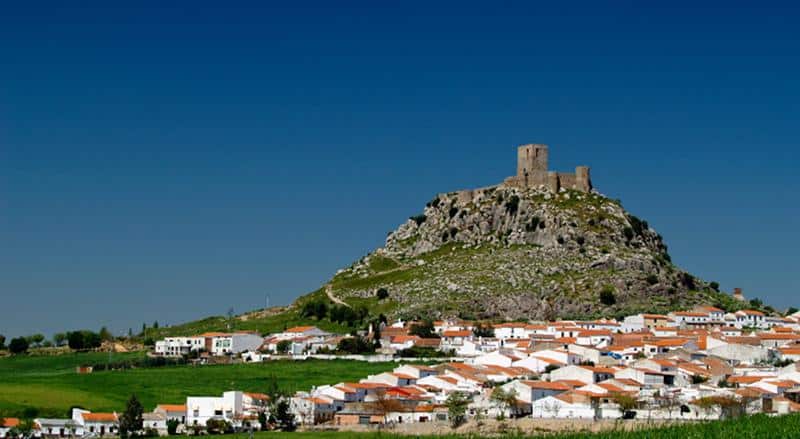 Belmez Castle has a long history, having been occupied for a long time by the French. Part of the beauty of this castles lies in the fact that it’s situated atop a striking hill, overlooking a collection of charming Belmez houses.

To be quite honest, if I were to make a sunny version of Frozen, this is where I’d have Elsa flee to (who needs the North Mountain, anyway?!).

You might have figured out by now that the Spanish word for ‘castle’ is castillo. The reason that these two words are quite similar is that they both come from the Latin word castrum, meaning ‘fort’! And, get this, the historic region of Castile (which covered quite a bit of northern/central Spain) is called Castilla in Spanish.

It’s thought that this relates to the fact that so many castles were built here as part of the Reconquista (which I’ll tell you about a bit later). The language of Castile became known as Castilian (castellano), which nowadays we often call ‘Spanish.’ 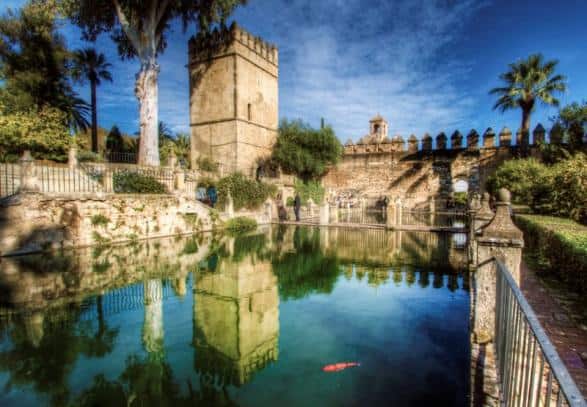 Also known as Alcázar de Córdoba, this castle boasts a bathhouse and 50,000 square meters of garden (for reference, that’s over 6 soccer pitches).

This castle has been built and remodeled over the years as it’s had different owners, but it maintains a strong sense of Moorish influence.

What does ‘alcázar’ mean?

You’ll notice that some of these castles are called ‘Alcázar de X’. The word alcázar refers to a castle or fortress, but is often used to describe Moorish castles, as it comes from the Arabic al-Qasr, which, again, comes from the Latin word castrum. 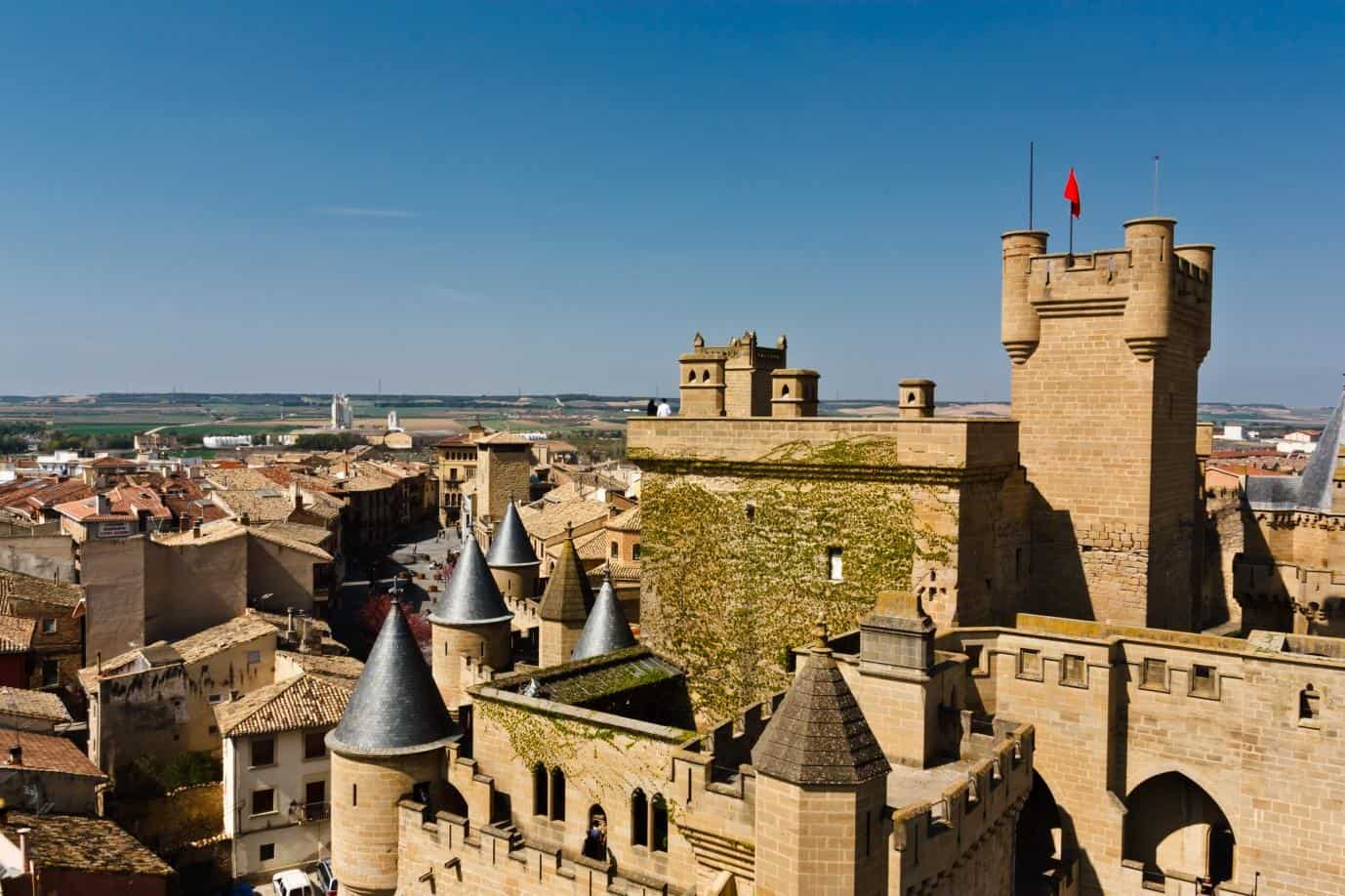 Strictly speaking, this beauty is a palace, but has some pretty castle-y qualities (hello, turrets!).

It is now recognized by its three main parts: 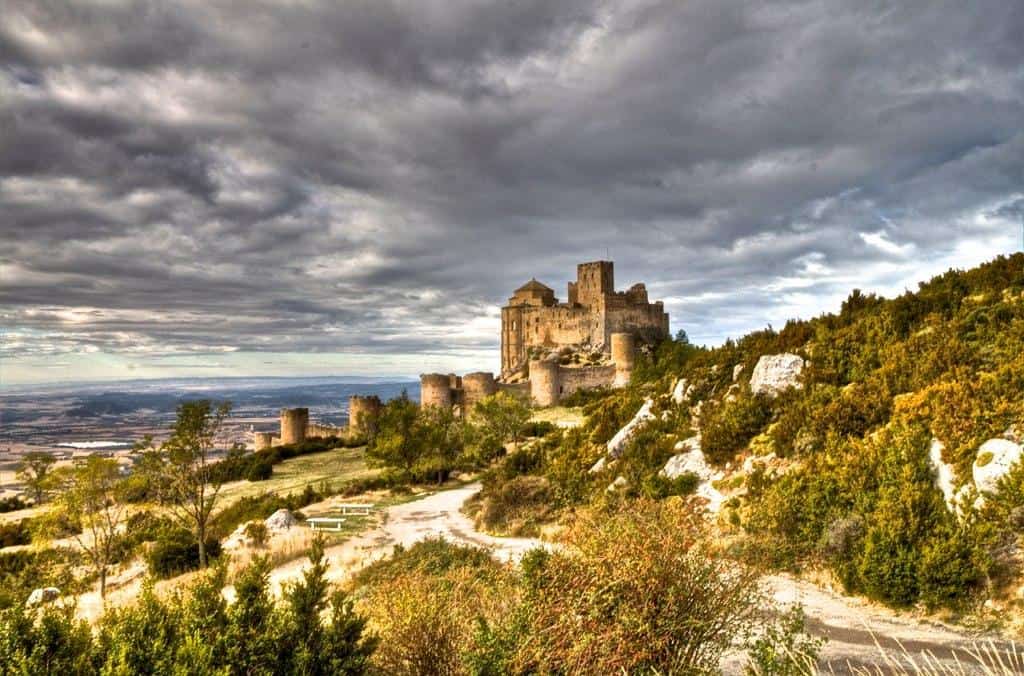 This Romanesque beauty is located in Huesca, and is thought to be one of Spain’s oldest castles, having been built in the 11th and 12th centuries on the border between Muslim and Christian lands.

Tourists can visit the armory room, the chapel, and the dungeons---which were used as a prison before becoming pantries for monks! 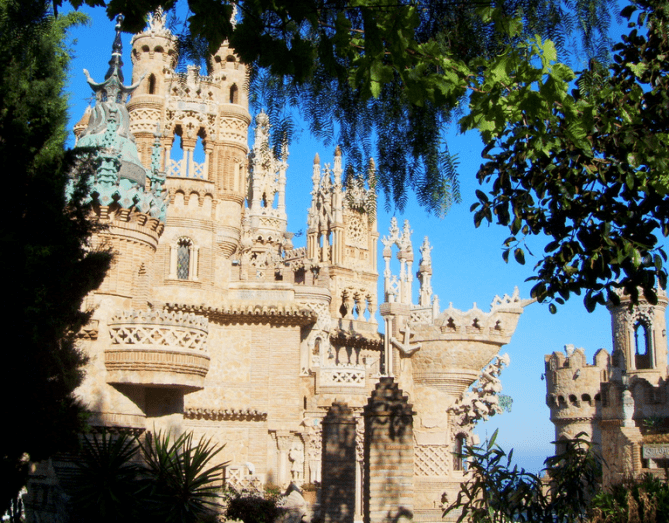 Strictly speaking, this is a monument more than a castle, having been built in the 80s and 90s as homage to Christopher Columbus.

Christopher Columbus’s voyage to the Americas was funded by Queen Isabella I of Castile and King Ferdinand II of Aragon, known collectively as the Catholic Monarchs.

However, Christopher Columbus (known in Spain as Cristóbal Colón), wasn’t actually Spanish! He was actually born in the Italian city of Genova, where he would have been called Cristoforo Colombo. 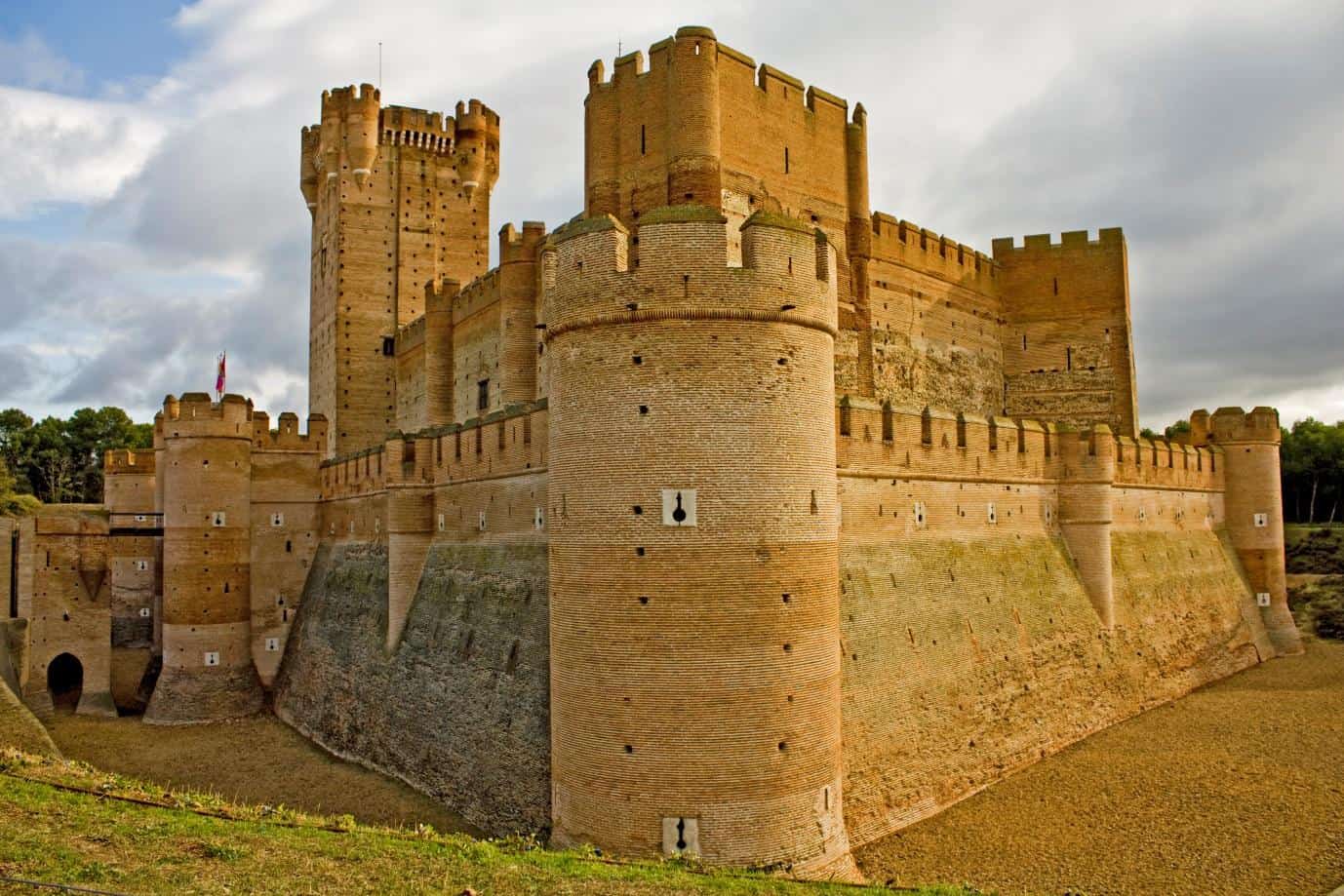 La Mota has an air of Anglo-Saxon charm about it, but is actually styled according to the escuela de Valladolid (Valladolid school) castles.

A scale model of the castle can be found at the Parque Temático Mudéjar in Valladolid, which is a park full of scale models of famous landmarks.

The castle is positioned on top of a hillock (little hill). The Spanish word for a hillock is mota, hence the name! 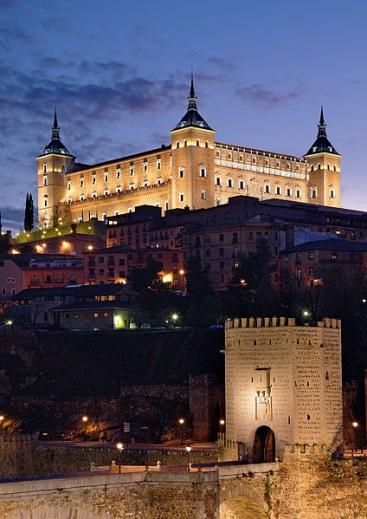 This one looks awesome in the dark, and super modern! But looks can be deceiving---it turns out that it’s actually been around since the 3rd century or earlier, having been used back then as a Roman palace!

This alcázar has witnessed its fair share of history, including a famous siege during the Spanish Civil War, during which hostages were held, and scores of people died. 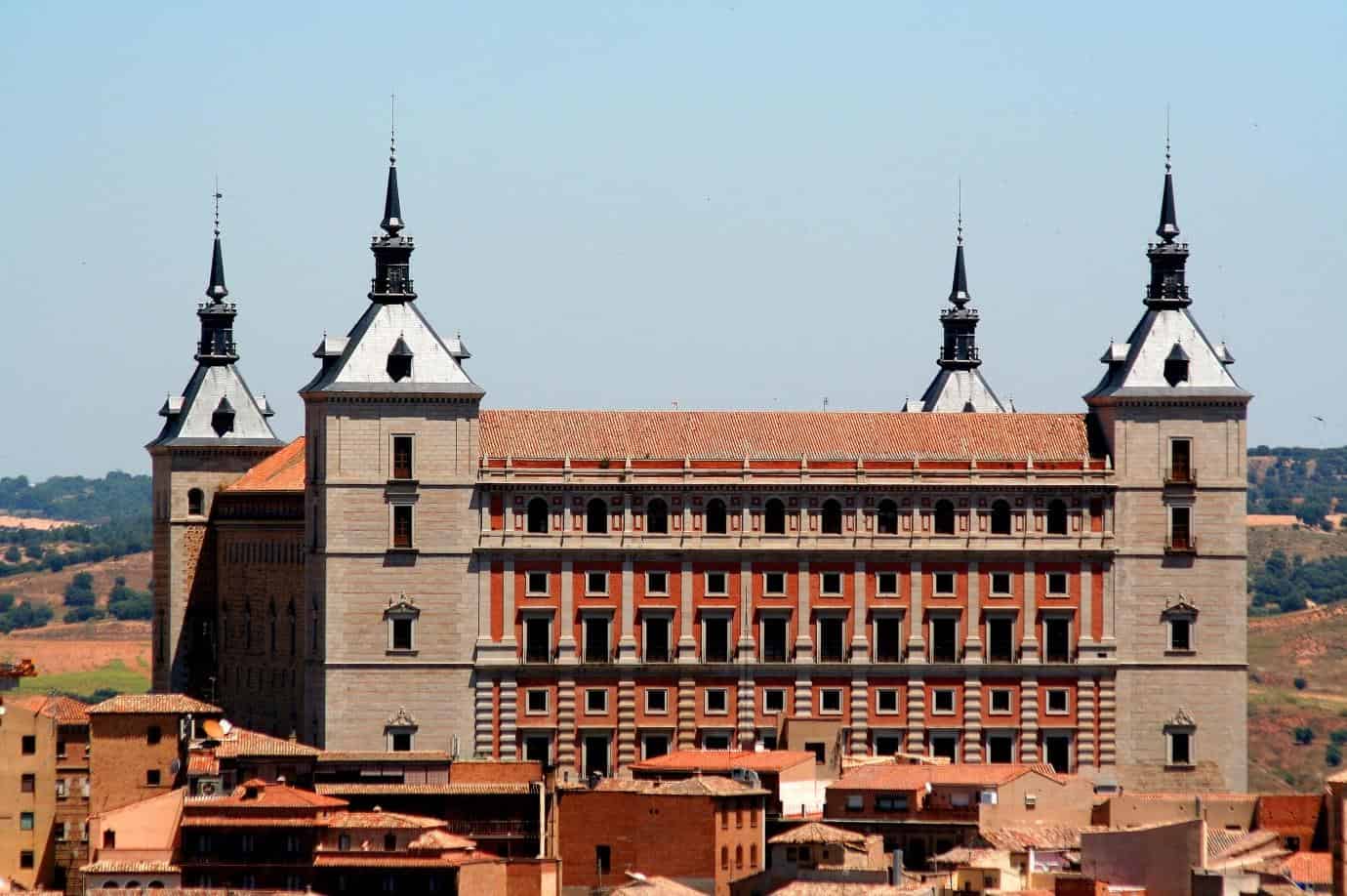 It only takes a glance to see that this castle has a more homely feel than a lot of the others. Why? Because in 1969, artist Salvador Dalí bought the castle as a gift for his beloved wife, Gala! Serious #relationshipgoals right there.

He fixed it up and put his own personal Daliesque twist on it, and it’s now open to visitors. 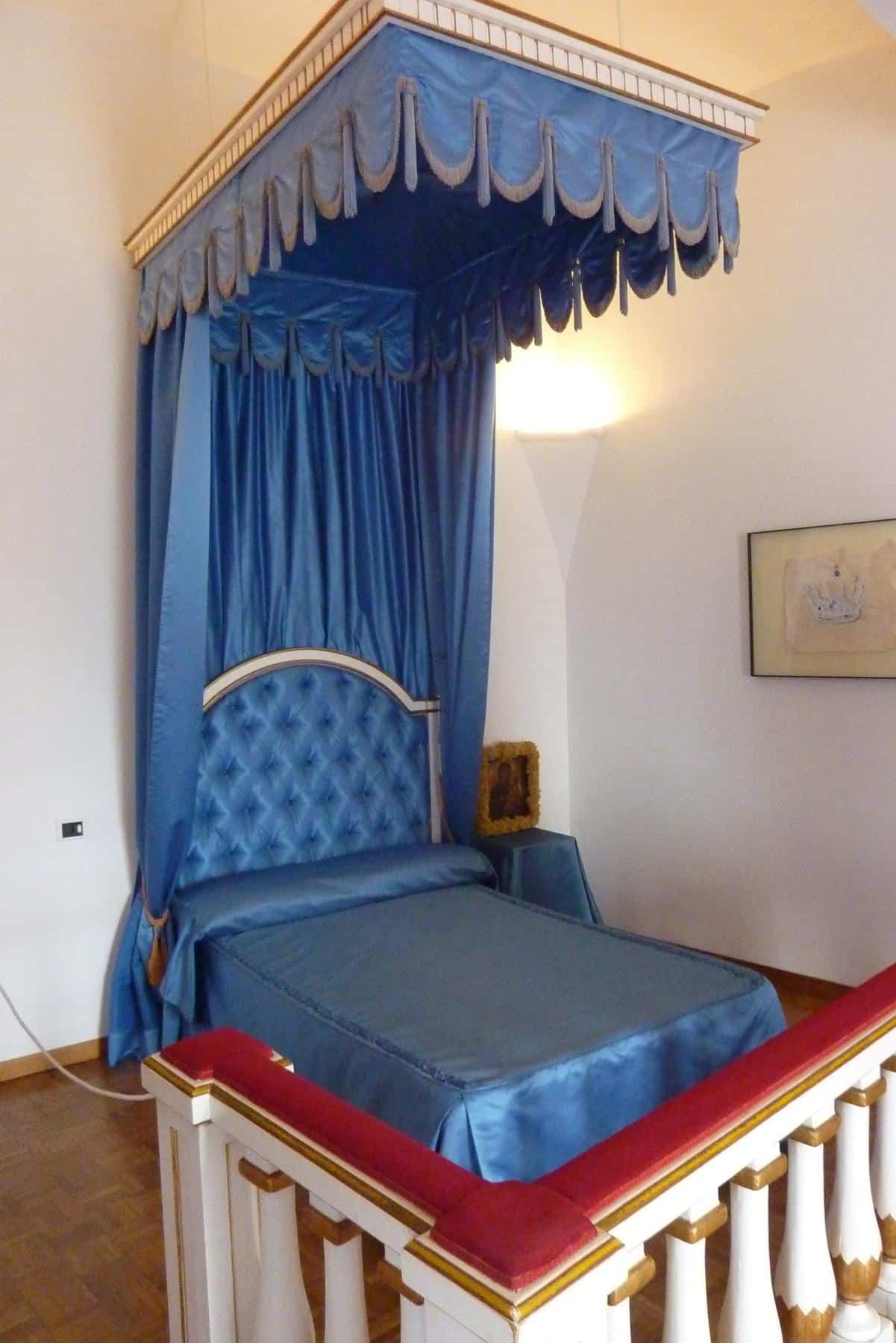 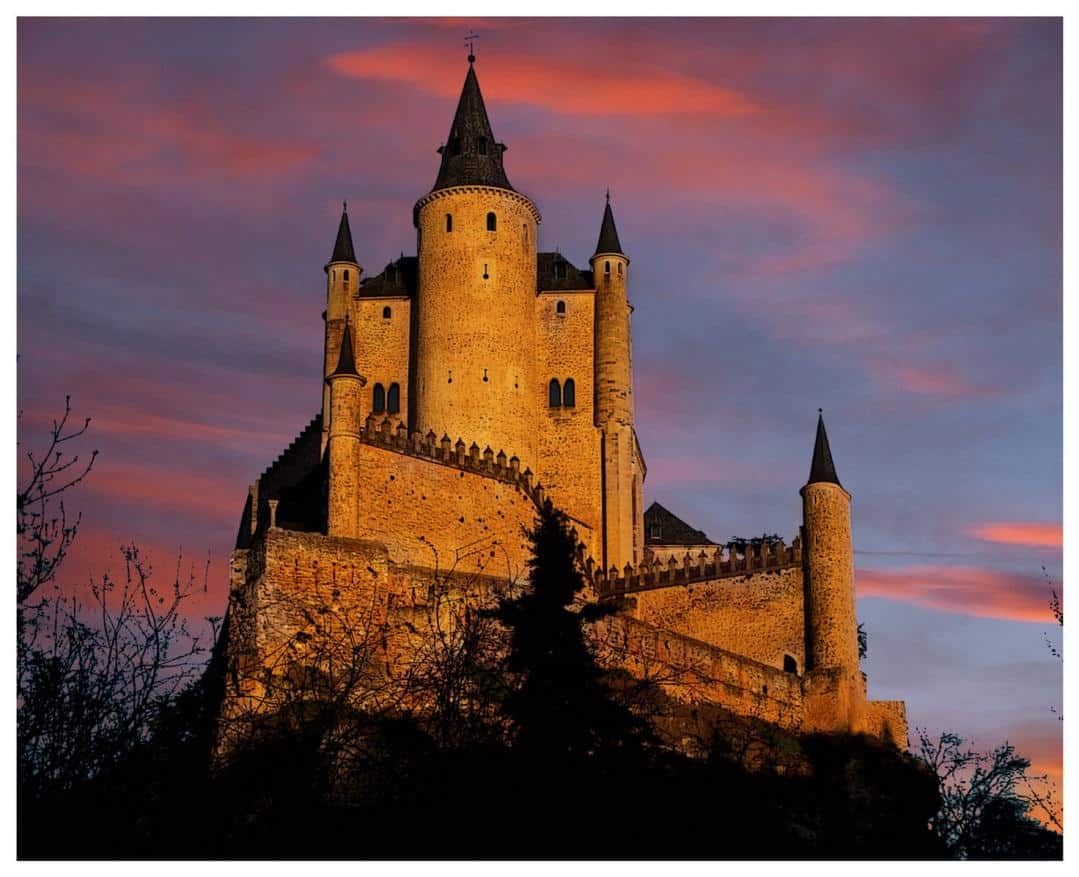 Situated just out of Madrid, this one looks like it’s come straight out of a Disney movie (as well as looking a bit like Hogwarts). The good people of UNESCO must agree that this castle is a good’un, as it’s been declared a UNESCO World Heritage Site.

The shape of the castle is often compared to the prow (front part) of a ship!

It’s one of the defining features of Segovia, along with the famous aqueduct, pictured below. 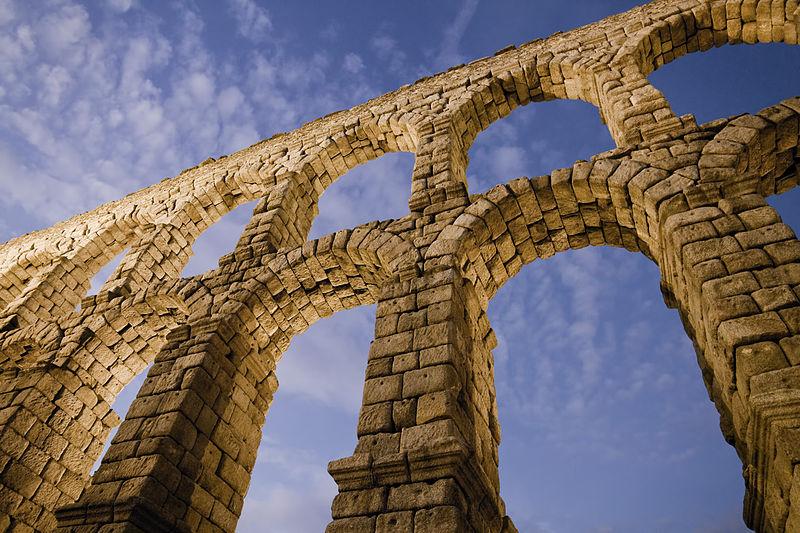 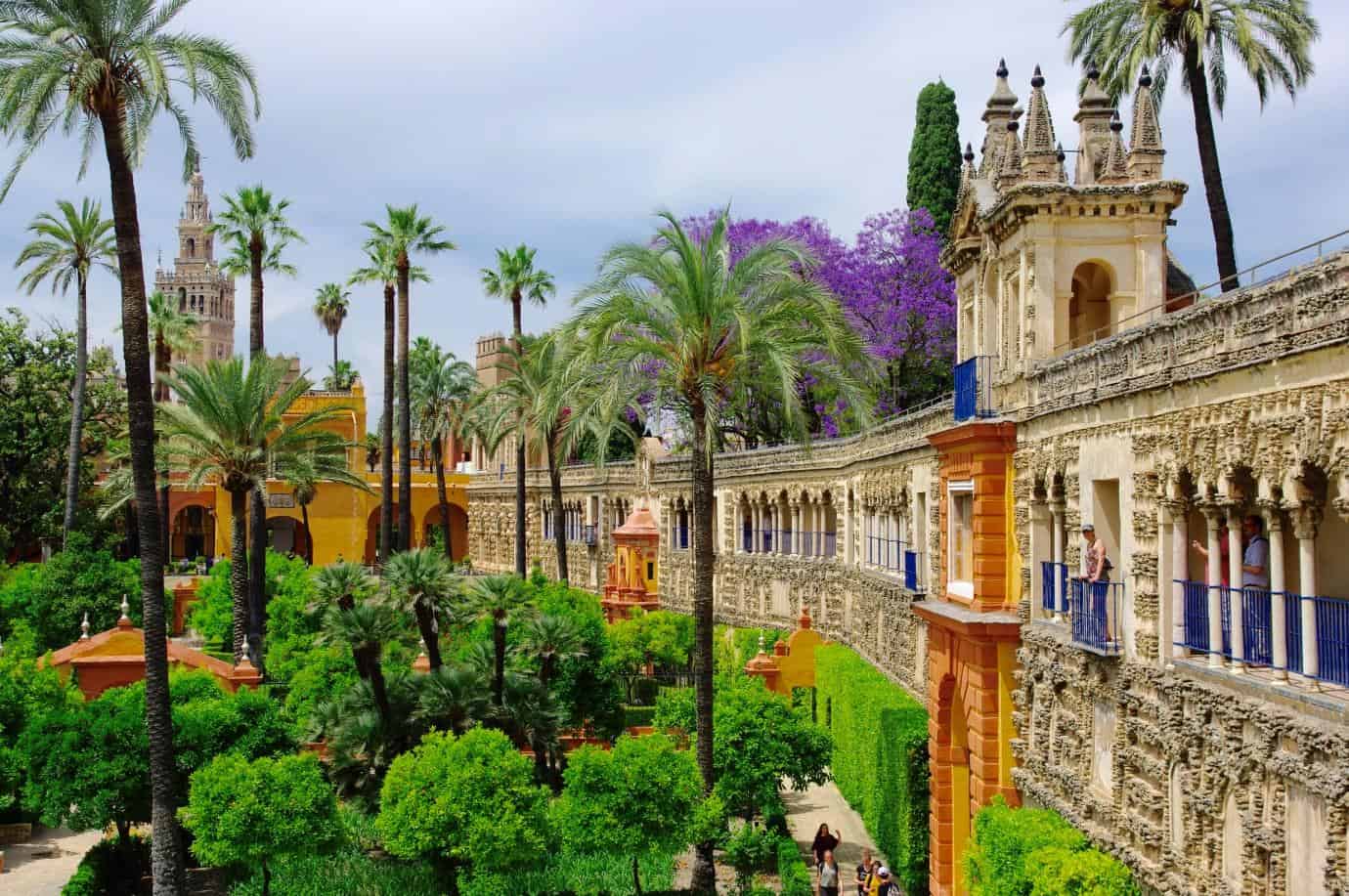 Standing proudly in sunny Seville, this UNESCO World Heritage Site is beautiful inside as well as out! It reflects the history of the region, with influences from the Arabic period, through the Renaissance, up to the 19th century.

It is thought that it’s the oldest palace in Europe to still be in use today by the Spanish royal family. 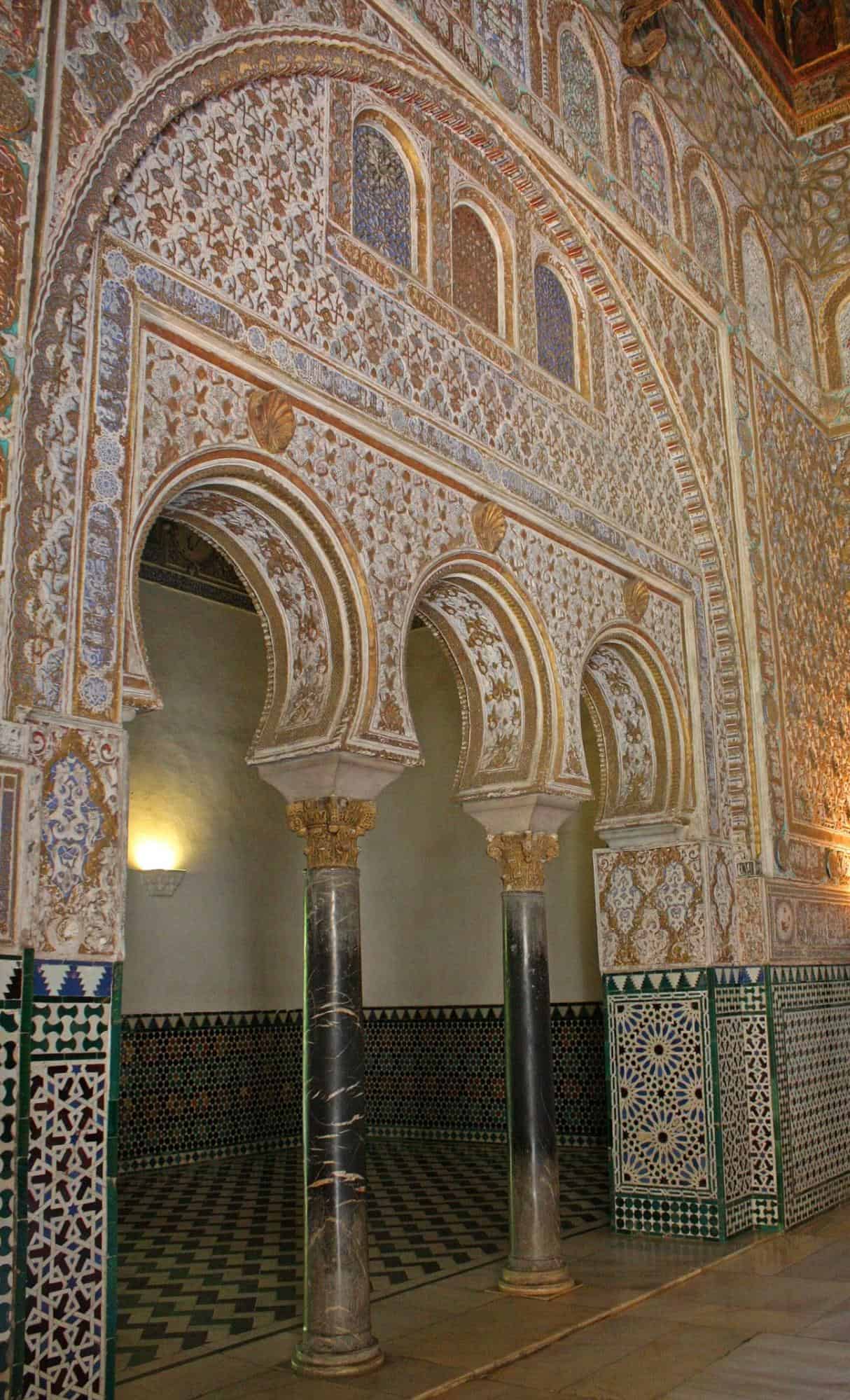 So, hopefully you’ve enjoyed our little historical tour of Spain. Now that you’ve seen a list of some of the prettiest castillos in the country, you can plan your next trip to visit some of them!

Don’t forget to prepare for your travels with our Spanish phrasebook (with audio). Check it out below. ¡Buen viaje!