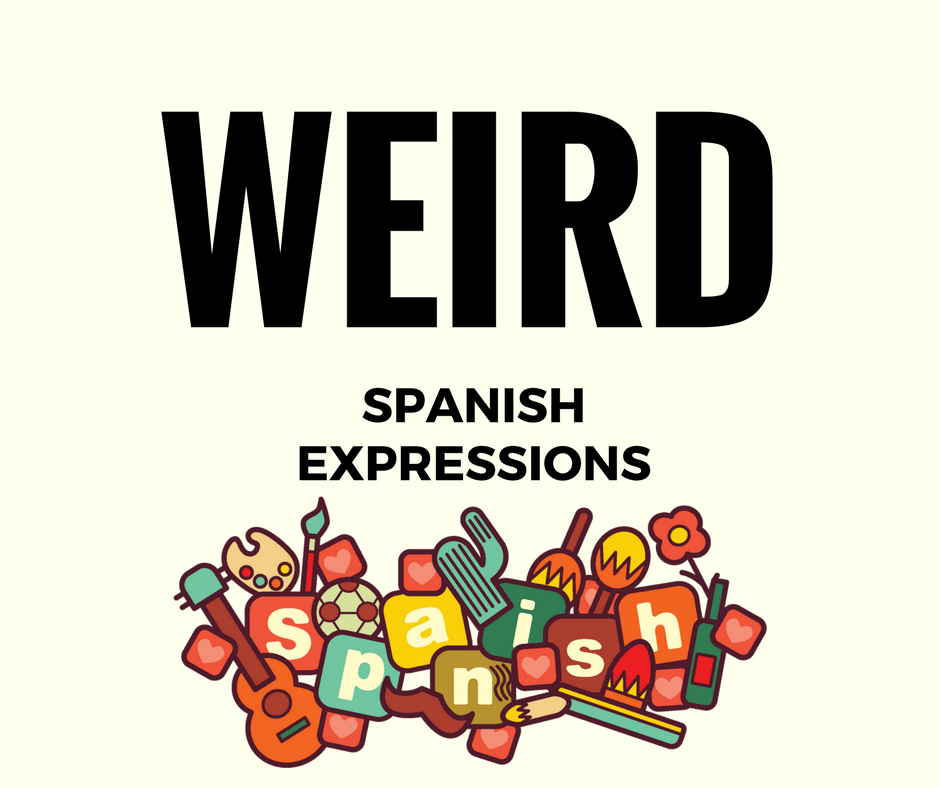 Every language has its own set of weird expressions and Spanish is no stranger to some of the craziest idioms.

Today you’re going to get to know common themes in Spanish idiomatic expressions and get an insight into the thoughts and culture of the Spanish people through their usage of these expressions. All that through this list of 20 fun expressions.

Then click on the big yellow button to download the Spanish Learning Package.  You’ll find inside the pronunciation guide in PDF format (and you get the MP3 too!)

Literally: Shrimp that falls asleep, gets taken by the stream.

You might not guess the context to which this common expression is being used, just by looking at it. This saying compares people with that of snoozing shrimps who get carried away by the water currents. In English, it’s somewhat similar to “You snooze, you lose.” Or if you don’t do anything about something, you’ll get swept away.

What’s the shrimp got to do with it, you ask? Well, they do illustrate the point of the expression pretty well, don’t you think?

Literal meaning: The dead and the guest, stink after three days.

This expression is not just morbid, it’s also quite rude. It is some sort of reminder to guests not to overextend their welcome because as the saying goes, after three days, the guest would stink like that of a corpse. Stinky and unwelcome. Harsh.

Literal meaning: Loving without desire is worse than eating without hunger.
This somewhat ironic expression compares two important areas of life: loving and eating. Loving someone without any desire is just like forcing yourself to eat even when you’re not hungry. Do you agree?

This might sound like a crazy expression bordering on blasphemous, but it’s actually a serious one that talks about life’s injustices. It is often used when alluding to someone who receives a gain or opportunity they won’t even be able to use or take advantage of. Like giving bread to a person who does not have teeth to bite it off.

Literal meaning: With the dog dead, rabies is gone.

Yet another spanish expression mentioning death, in this case of a dog, and it is used to point out that for eliminating consequences, the solution is to go directly to the source and eliminate it. Involving dogs is going a bit too far, don’t you think? But it does get the point across.

Literal meaning: To cost an eye of the face.

One of the most dramatic expressions there is, this one is used when something is hard to get or too expensive, it is comparable to giving an eye to pay for it.

In English, we say to cost an arm and a leg. Both of which boils down to the same meaning: it’s going to cost you a small fortune.

Literal meaning: In the country of the blind, the one-eyed is king.

Literal meaning: Hunger and the desire to eat got together.

What happens when hunger and the desire to eat come together at the same time? This expression compares that scenario to two bad people who get together to join forces. Can you imagine how that would turn out?

Literal meaning: To pee outside the pot.

This odd colloquial expression is used when someone misses the point of a conversation or doesn’t know exactly what they’re talking about. It’s being likened to shooting pee outside the pot— way off the mark. A bit weird, I know, but it’s funny and quite a useful expression to learn.

Literal meaning: To have one foot inside the coffin.

Here we go again with another odd expression talking about death. When you have one foot inside the coffin, it only means one thing: you’re close to death or in a life-threatening situation.

Literal meaning: Once every death of a bishop

At this point, you’ve probably realized already that death is a common subject in Spanish expressions. This time, it’s the turn of the bishops. Instead of saying “every once in awhile”, the Spanish speakers would say “Once every death of a bishop”.

This might seem like a funny expression to you, but it actually has a biblical origin. If you’re familiar with the bible, you might remember the passage about good times and fat cows and bad times with skinny cows. Here the fat cows are referenced as a way to describe abundance.

Literal meaning: A skinny dog does not lack fleas.

Animals are another common subject in Spanish expressions. In this case, it’s all about a skinny dog with fleas. This expression is used when someone is already doing bad and something even worse keep happening. A bit similar to “when it rains, it pours”, except with dogs and fleas. Yep, weird.

Literal meaning: To kill the hen of the golden eggs.

What happens when you kill the hen that lays golden eggs? Well, apart from the fact that you must be incredibly insane to do so, you’re also killing the source of your good fortune and wasting a great opportunity.

Another expression about death, but this time, it’s the poor cat. You probably know this expression already in its English counterpart, but it doesn’t hurt to know how to say this in Spanish, right?

Literal meaning: The dead to the hole and the living to the joy.

Again with the dead, geez. But what makes this expression weird is its seemingly insensitive aspect. It means that when a person dies, they should be buried and those that are still living should go on and enjoy life. It can be used to condole with someone in grief, to encourage him or her to go on living despite the grief.

Literal meaning: Don’t look for the cat’s fifth leg.
Would someone be literally interested in looking for a cat’s leg, let alone a fifth one? No clue. But this expression is used when someone is trying to find something that is none of their business.

Literal meaning: They gave him a cat for a rabbit.

Let’s say you bought a rabbit–picked it, paid for it–but what you got instead is a cat! You don’t need a cat! You paid for a rabbit, what the heck? That, my friends, is a scenario that means you have clearly been ripped off: you got a cat for a rabbit.

Literal meaning: We were too many and grandma gave birth.

Imagine this scenario: You live in a super crowded house. Then–bam!–your grandma went ahead and gave birth to a new child. Say whaaat?? That’s exactly what this expression tries to suggest: you already have a lot of problems, and then here comes a new one.

Which one is your favorite? Let us know in the comments.

If you liked this article, don’t forget to share with friends!